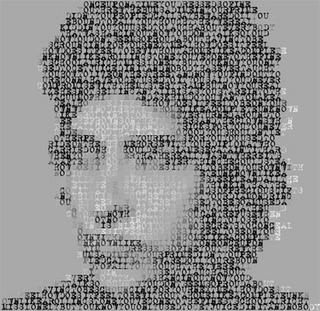 'Dylan Lexigraph' is a digital print on canvas by Brighton-based artist Mike Edwards. Lexigraphs are literally 'word portraits' - where the image is created from relative text. For more examples of his work see www.mikeedwards.co.uk

What follows is some kind of analysis of Scorsese’s 3 ½ hour documentary ‘No Direction Home’ screened simultaneously in the US and the UK on the 26/27th September 2005.

I was invited to a special Arena screening at the NFT in London the week before, as a result of my work on Douglas R. Gilbert’s ‘lost’ Dylan photos (see earlier story). This screening allowed me to view the whole work for the first time with just a ten-minute break between parts and on the big screen with superior sound. It was prefaced by a specially shot mini-intro by Scorsese himself, sitting in his director’s chair on the set of his latest movie. The experience was overwhelming and emotional.

The following week at the Lewes Arms, we managed to get the house tv installed in the side room and a bunch of us sat down together and watched it two nights running. A real beat time was had by all, with Guinness on tap nearby, and one or other of us breaking out into song throughout.

Today I watched the DVD which, disappointingly, has no additional interviews - which I was hoping for.

It was only later that the questions started to arise.

Let’s begin with what we know about the film, the best source I have found so far being Mick Brown's article 'Definitive Dylan' in The Daily Telegraph. The story begins ten years ago when Jeff Rosen, Dylan's manager, began assembling material - rare performance footage, news clips etc - with view to making a film. This included 60 hours of colour footage shot by D.A. Pennebaker (of which more later) plus a number of specially filmed interviews (credited in the film to Michael B. Borofsky) and eight hours of original interview with Dylan himself by Rosen and others.

In 2000, Rosen approached Nigel Sinclair who had directed 'Masked and Anonymous' , the feature film starring and co-written by Dylan, and the duo then approached first Anthony Wall of the BBC TV series Arena and then Scorsese who, apparently, agreed on the spot.

Scorsese apparently spent four years realising the project, though how much time he spent on it is unclear. Certainly it is a triumph of editing technique and a prominent editing credit is given to David Tedeschi. In other words, Scorsese shot no original footage as far as one can discern.

Interestingly, it is Scorsese’s voice that reads out Bob Dylan’s speech at the political dinner of the Emergency Civil Liberties Committee in New York in December 1963, where he was given the Tom Paine award (previous recipient Bertrand Russell) and delivered a speech that managed to severely offend the majority of the audience, including as it did, remarks to the effect that he could understand and in a sense identify with Lee Harvey Oswald, remarks about Cuba, about elderly men in suits. A moment of high drama.

So this is a film largely composed of material assembled and controlled by Dylan's management - no doubt added to by Scorsese's own diligent researchers. We are told that Dylan let Scorsese get with things with no interference but the way things were set up meant that there were no hard questions asked - Dylan's private life, by and large, is ignored, particularly his relationship with his women (Baez excepted, where Dylan made a modest nod in the direction of an apology).

Yet one can't escape the feeling that Dylan himself is very much in control of the story-telling, myth-making process. The brilliance of ‘Chronicles’ displays his skills in this regard and the book’s themes suffuse ‘No Direction Home’ in the sense that Dylan portrays himself as the recipient of an ocean of Americn music, echoes of which can be found throughout his ouevre.

This knowingness is often in evidence. When talking about his earliest girlfriends Gloria Story and a girl named Echo, he says they brought out the poetry in me. Then he winks at the camera as if to say 'I’m in on the act'.

Obnviously the film is a shrewd move on behalf of the Dylan business empire, a prime-time advert for his back catalogue and a useful primer for audiences too young to have caught Dylan's early years. In such ways, music longeivty is maintained and Dylan, one feels certainly has one eye at least on how history will see him. I refuse to believe that such a monumental ego is not concerned about this. Important to remember also that Dylan's business organisation also licensed his music to Starbucks.

The film's storyline also follows a well-trodden path - the mythical Tom Sawyer journey from Hibbing to High Town, Greenwich Village adventures, the political years, the transition from folk to electric/pop balladeering, the rise to fame, the backlash of disapproval, the motorbike accident. Roll credits. This is, in other words, not the defintive Bob Dylan story, rather a simplified version of a much more complicated historical narrative.

One reason the film may have taken so long is because of the deals and copyrights at stake. Witness the unusual on-screen credits in the middle of the film for Pennebaker. I would say this film is certainly as much Pennebaker’s as it is Scorsese’s – his sense of camerawork is immaculate, the old colour film looks great as does '60s provincial England, and the actual performances are rivetingly captured on sound and vision equipment that would look totally primitive by today’s digital standards.

There are some interesting clips and fresh outtakes from Pennebaker's 1965 black and white documentary 'Don't Look Back' but more interesting and predominant is the colour footage Pennebaker shot in 1966 during the UK leg of an international tour. Apparently Dylan had allowed Pennebaker control over the previous film but not second time around. Pennebaker was hired in as cameraman only and paid a straight fee for this project and, out of the huge amount of film shot, a one-hour documentary called 'Eat The Document' was made, that was broadcast only once on a local New York tv station in 1979. This, incidentally, contained 30 seconds of a ten-minute sequence showing Dylan and Lennon 'fucked up on junk' in the back of a limo as it cruised through London. (The transcript of this sequence was featured as a cover story on the very first issue of Mojo).

Incidentally, the full details of all this can be found in the excellent 'Bob Dylan Behind The Shades: The Biography - Take Two' by Clifford Heylin (Penguin. 2001). He makes it clear that, in both films, more so in the latter, Dylan was certainly on speed and, by 1966, was definately showing signs of wear and tear due to drug use.

What puzzles me most about 'No Direction Home' is the exclusion of two important events during the time period the film covers 1960-66.

1. The meeting of Ramblin Jack Elliott and Dylan at Woody Guthrie’s bedside, January 1964. Bear this in mind. At the point where Dylan met Guthrie, the latter could hardly sing and couldn’t play. Jack had lived with Guthrie for years and Guthire had taught him his repertoire and skills. Dylan became friends with Jack and copied Jack’s act – Guthrie by proxy. Thus Jack is bound into the DNA of the Dylan story. Happily Dylan acknowledges this correctly in two places in ‘Chronicles’ but Jack is not interviewed for the film. In fact we glimpse him once in a full frame black and white still with his big black hat, and once indistinctly lying back next to Guthrie on a sofa. But that’s it. Jack is very much alive in California and available for interview I would imagine. But he is not in this story.

2. The meeting of Dylan with the Beatles at the Hotel Delmonico in New York in August 1965, when they smoked strong dope together. The meeting had been set-up by the late Al Aronowitz, who took Dylan there that night and supplied the grass. He died earlier this year, his story unrecorded except by himself, to my knowledge. Aronowitz always claimed that this is where the 60s began.

Obviously there are many other incidents and people that must be stripped away to construct a clean, highly structured and edited narrative of this kind, but real life is anything but clean. Its riven with interconnections and random events, with sub-plots and ancillary dramas. But the above episodes seem to important to exclude.

The other key missing subplot of the Dylan of this period is the relationship between Dylan and Baez with Mimi and Richard Farina, as brilliantly documented in ‘Positively Fourth Street’ by Davd Hadju. Another documentary we hope but please not a biopic.

High points: Odetta was stunning, Dylan’s piano playing on Ballad of A Thin Man, the photo of him with Johnny Cash, Cash with a big bear-like protective arm around the young Dylan who is beaming. When Cash recorded one of his songs, Dylan said, it was the greatest thrill of my life. Shame they couldn’t catch Cash before he passed on. I am hoping someone like Rick Rubin is making a major documentary on Cash before too long.

‘No Direction Home’ is not the definitive Dylan film, in other words, but it is a good one. Through ‘Chronicles’ and this film, Dylan is mastering his place in the Pantheon and reaching out to younger generations. He’ll be back in England soon, still on the road, still with his eyes fixed on that distant horizon, still chasing the ghosts of lost cowboys. A man who is too clever by half and who casts a long shadow.

Dave van Ronk and Allen Ginsberg have both died since they were interviewed for this film. This morning's paper also carried the obituary of another important figure who we also see on screen - Harold Leventhal.
See: http://www.guardian.co.uk/obituaries/story/0,,1589084,00.html

Without doubt one of the most interesting books on Dylan is Mike Marqusee's, 'Chimes of Freedom: The Politics of Bob Dylan’s Art, New York' [The New Press, 2003] which sets Dylan's work in its political and social context and gives a very fresh perspective on many incidents featured in the Scorsese documentary. A new version of the book ' WICKED MESSENGER: BOB DYLAN AND THE 1960S ' has just been published by Seven Stories Press. [October 2005]. This new paperback edition includes a discussion of Dylan’s 'Chronicles' and 'Masked and Anonymous', as well as new material on Dylan’s relationship to country music, on Frank Zappa, Bruce Springsteen and Steve Earle.

See Mike Marquesee's blog http://www.mikemarqusee.com/ and his interesting piece on Dylan and the Starbucks deal here
at 9:02 pm