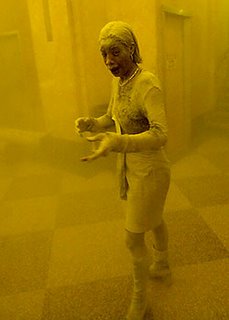 Ever since my previous post, have been thinking and reading about 9/11. Having trawled and cogitated at length, here is what I recommend:

Wikipedia has come into it own on this. It has its critics but the following make extremely good starting points for understanding why there is a substantial number of people in the US who disagree with the official version of events.

Sept11, 2001 Attacks
An account of the official sequence of events and subsequent aftermath

9/11 Commission Report
This provides a brief summary of the official report and provides a download link to get a pdf of the whole thing. It highlights key facts, carries a summary of major articles and lists substantial criticisms on the report.

9/11 Conspiracy Theories
This examines the subject in exhaustive detail and lists the major topics/questions put forward
by networks of different groups and individuals who do not believe the 'oficial truth.' Includes extensive links.

Much coverage has been given to Scholars for 9/11 Truth
Wikipedia entry lists every member and really explains who they are - and their credentials.

I recomend 'The 5 Unanswered Questions About 9/11' by James Ridgeway [Seven Stories Press]. Ridgeway, Washington correspondent for the Village Voice, does not believe the government or the conspiracy but he does believe that someone, somewhere should be held accountable. His unanswered questions are:

1. Why Couldn't We Stop an Atttack from the Skies: How the Airlines and the FAA Resisted Air Security Measures That Might Have saved Lives.

2. Why Didn't the Government Protect Us?: How the United States Government Failed Its Citizens Before, During, and After 9/11.

3. Why Didn't We Know What Was Coming?: How Business as usual at the FBI and the CIA Helped Leave the Way Clear for the Attacks

4. Did US Allies Help Make the Attacks Possible?: How Pakistan, Saudi Arabia and US Foreign Policy Contributed to the Events of 9/11

5. Why Couldn't the 9/11 Comission Get to the Truth?: How the Report protects the System at the Expense of the Public.

There's a lot of good journalistic research here, original interviews, and a clear writing style. One is left with a deeper appreciation of the whole - and a lot of questions, many of them quite disturbing. The spirit of Tom Paine is in his writing and in his passion for the truth.

Being a sucker for graphic novels, I also bought 'The Illustrated 9/11 Commission Report: A Graphic Adaptation' by Sid Jacobsen & Ernie Colon. Interesting to look at after reading Ridgway. The book as a whole has a weird feeling about, like it came out of a Phillip K. Dick novel.

Read Martin Amis' lengthy essay in The Guardian: The Age of Horrorism

UPDATE: Thanks to Gordon for link to Project Censored: Unanswered Questions of 9/11

Hey John I like your site a lot. Here are a couple of links ref 9/11 that might interest you.