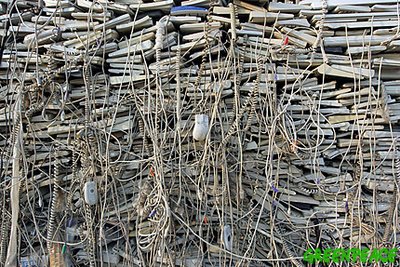 A huge pile of computer keyboards at a waste dump in China. It is cheaper for companies to dump hazardous e-waste in China than implementing a proper product recycling network.
* Some 20-50 million tonnes of electronic waste are generated globally every year; Asia alone discards an estimated 12 million tonnes each year

* E-waste now makes up five percent of all municipal solid waste worldwide, nearly the same amount as all plastic packaging. E-waste is much more hazardous.

* E-waste is now the fastest growing component of the municipal solid waste stream because people are upgrading their mobile phones, computers, televisions, audio equipment and printers more frequently than ever before. Mobile phones and computers are causing the biggest problem because they are replaced most often.

* In Europe e-waste is increasing at three to five percent a year, almost three times faster than the total waste stream. Developing countries are also expected to triple their e-waste production over the next five years.

These facts and figures come from a detailed study by Greenpeace International, who are running a toxic campaign against e-waste. Check out their Green Electronics Guide, which ranks leading mobile and PC manufacturers on their global policies and practice on eliminating harmful chemicals and on taking responsibility for their products once they are discarded by consumers. Companies are ranked solely on information that is publicly available.
at 12:02 pm