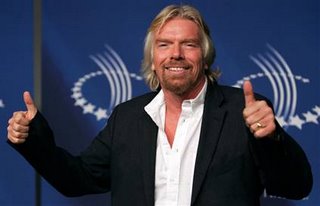 Richard Branson has recently been doing what he does best - capturing world headlines - with his very public committment to pledge all his profits from Virgin's rail and air businesses - an estimated $3bn (1.6bn) - to combat climate change. What seems on the surface a magnanimous gesture is, in fact, just another business opportunity for Branson - all the money will go into Virgin Fuels, his new renewable energy business.

Virgin Fuels business will invest up to 400 million US dollars (£214 million) in renewable energy initiatives over the next three years. Their first investment came this September - $60m into Cilion, a California-based venture that plans to make bioethanol from corn and to construct seven refineries by 2009. Virgin Trains are switching their diesel-power trains to run on biodiesel.

According to a BBC report 'Branson's Grand Power Strategy' (22nd Sept 2006), Virgin Fuels' ambitions stretch across the entire power-generation sector. 'The company talks of investing in more ventures like Californian firm Cilion...Wave power and wind farms are on the agenda, so is nuclear power. Virgin Group director Will Whitehorn said that 'Virgin Fuels has been carefully positioned to bridge the gap between environmental rhetoric and commercial reality.'

The article concludes: 'After the fuel bill for his Virgin Atlantic airline grew by £300m over two years [Branson] spoke of wanting to build a new oil refinery to reduce world prices. At that time, in late 2005, the fuel bill for both Virgin Atlantic and Virgin Express airlines was running to £750m a year, Sir Richard said. It seems there is a compelling commercial logic behind Sir Richard's drive for new fuels.'

According to 'Green virgins in outer space' byJean Mahony (New Statesman 15th May 2006): 'Virgin's four airlines consume more than 2.6 billion litres of standard jet fuel every year; naturally, the Group thinks the government should "urgently address" the possibility of a biofuel mix for commercial flights. At present, the aviation industry generates almost as much carbon dioxide every year as all human activities in Africa. However, Virgin's public commitment to the environment is only part of the story: ethanol, unlike oil, is relatively cheap to produce, and is not subject to the whims of Russia or Opec.

'In November 2005, Richard Branson told reporters that he hoped "some or all" of Virgin's jet fuel would be replaced with ethanol "over the next five to six years". To date the European Aviation Safety Agency has not received any requests to certify the technology that would allow for a biofuel blend on commercial flights, and aircraft coming on-stream now have lifespans of up to 50 years. Even if the technology were widely available, regulatory authorities would have to be satisfied that the characteristics which make pure ethanol an unsatisfactory choice for jet engines - its propensity to thicken at low temperatures, its low flashpoint, its low energy density and its release of dangerous gases at low power settings - are adequately addressed.

'It seems that even Branson's enthusiasm for the fuel has been tempered: in January 2006 he told Fortune magazine that he was not sure if ethanol "will ever do it" for jet aeroplanes. However, habitual confidence undimmed, he went on to predict that if we could run all land-based transport on cellulosic ethanol and leave aeroplanes to burn petroleum-based fuel, "issues like global warming will be fixed".'

UPDATE: 'Support for Branson plea to clean up skies is slow to get off the ground' - Dan Milmo [The Guardian 28 Sep 2006]

There's an interesting discussion on biodiesel airplanes at Treehugger

According to an Associated Press story 'Researchers Seek Alternative Jet Fuel' (June 20, 2006): 'Government and corporate researchers are looking into ways to power commercial jet engines with alternative fuels, although many caution that widespread use could be years or even decades away. Scientists face myriad obstacles, including the difficulty of producing, transporting and using massive amounts of these fuels under harsh conditions such as extreme cold. And for now at least, experts say many alternative jet fuels are more expensive than traditional ones. "It's just so much easier to develop a fuel for automobile applications than for airplane applications," said Billy Glover, director of environmental performance for Boeing Co.'


In his essay 'Biofuels: Green energy or grim reaper?' Jeffrey A McNeely, chief scientist of IUCN, the World Conservation Union, explains why many people are calling biofuels - made by producing ethanol, an alcohol fuel made from maize, sugar cane, or other plant matter - 'deforestation diesel'. Consider the following:

* Much of the fuel that Europeans use will be imported from Brazil, where the Amazon is being burned to plant more sugar and soybeans, and Southeast Asia, where oil palm plantations are destroying the rainforest habitat of orangutans and many other species.

* If ethanol is imported from the US, it will likely come from maize, which uses fossil fuels at every stage in the production process, from cultivation using fertilisers and tractors to processing and transportation. Growing maize appears to use 30% more energy than the finished fuel produces, and leaves eroded soils and polluted waters behind

* To meet the EU's proposed biofuel target of 5.75% would require, according to one authoritative study, a quarter of the EU's arable land

* Using ethanol rather than petrol reduces total emissions of carbon dioxide by only about 13% because of the pollution caused by the production process, and because ethanol gets only about 70% of the mileage of petrol.

McNeely concludes: 'The bottom line is that biofuels can contribute to energy and environmental goals only as part of an overall strategy that includes energy conservation, a diversity of sustainable energy sources, greater efficiency in production and transport, and careful management of ethanol production.'