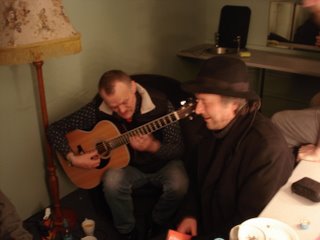 The Generalist meets Davy Graham
Dressing room, Komedia, Brighton.
8th February 2007
[Photo Louis May]
Meeting Davy was like making a connection with Neal Cassidy. He is an original beat brother whose massive contribution to British music and guitar playing is still only just being fully recognised.

Notes scribbled on the train home that night, at fever pitch, with added amendments in brackets:

'Arived late. Full house. Young guitarist playing. Ordered a drink by which time Davy Graham is on stage wearing a polka dot shirt, sleeveless puffer jacket, jeans and trainers and a corduroy titfer. His slight figure, bathed in red light, was set against a blank stage with only wisps of dry ice for atmosphere.

He played eastern pieces, medieval folk, bach. Sang folk and work songs (people clapped along), played a couple of other guitar pieces and left the stage. [His complete set I estimate was not more than about 30-40mins.]. After a sustained attempt to gain an encore, the applause stopped and then, at the last moment, Davy returned, recited a Brooklyn poem [along the lines of that famous one: Der spring has sprung/der grass has riz/i wonder where dem boidies is] and left the stage.

[His whole set had been punctuated by people walking out and as the crowd as whole left, it was clear that very few people were happy at what they had seen. There must have been 2-300 present. The place was virtually sold out.

We [son Louis and I] headed for the dressing room, where his young manager stood guard. I said I was a friend of Shirley Collins come to pay my respects and gained entrance. Davy and his mate were drinking an orange juice and we immediately fell into conversation. We talked about his 1962 albums, his esatern music, Brian Jones and Brion Gysin's Joujouka recordings. I asked him about Ken Colyer and Ramblin' Jack Elliot ('a good picker' he recalled).His friend played some ragtime. Lots of young people came and went, seeking autographs. I gave Davy a big hug, which is what I been wanting to do as soon as I first saw him, and we left him and his young admirers [and went out into the night, both saddened and elated.]

Then I started this short pome:

Musical Roundup: This contains review of Will Hodgkinson's book 'Guitar Man', lots of links and details about Davy Graham.
at 3:24 pm