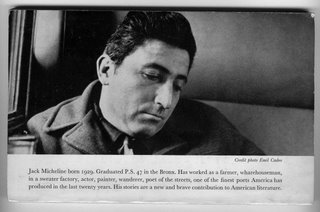 So how does a rare copy of 'In The Bronx and Other Stories', an inscribed copy no less, end up in a second-hand bookshop in Lewes, where I recently purchased it. Micheline is one of the lesser known beat writers and was unknown to me. The inscription, dated 3/28/66 (US style)
says: 'For Jackod! (could be Sackod?), Jack Micheline.' Under this he has written: 'The finest writers of this nation still remain unpublished but known amongst the [looks like lions] in this 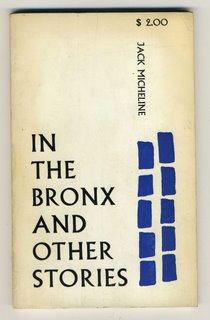 land. We write and it is a way of life and love.' The book is a first edition published in June 1965 by the Sam Hooker Press, 103 Park Avenue, New York. It is comprised of short pieces of prose that bring to mind both Bukowski and Raymond Carver. The extract I have chosen is from 'Whisky, Madness and Bellvue' and begins 'To be a poet is to be mad. I was a poet....' He describes arriving at a literary party, the kind of event he hated.

'I grabbed the bourbon and beagn to drink. I had come from the streets where I had lived and written and pissed and cried. I drank more bourbon and got drunk quickly and ran upstairs where the food was. I was drunk; I had finished a fifth of whisky. I had remembered the cries in the flophouse the winter before, and the years I had wandered through the streets, the long winters of hell in New York; and the fear and hell and cowardice of our twentieth century; the lips of prostitutes and junkies and mad dogs; the streets crowded in summer with sweat and dreams and fights and families and sirens and bars, fights, cribs and cubicles; the narrow crowded, stinging, smelly city, hard as reality, filled with lost loves and pain and misery; the roar of the beaten, hungry, frightened and afraid. I grabbed the salami sandwi ches and threw them from the balcony out into the street.'

Find out more about him at the website of the Jack Micheline Foundation.
at 5:06 pm