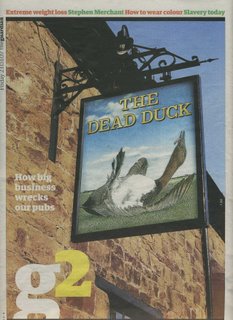 It began with an essay in The Generalist in October last year, [State of the Nation: Think About Your Local), developed into a blog of its own (http://lewesarms.blogspot.com) and attracted national press cioverage,was featured on Radio 4's AM programme and the story was syndicated worldwide through Reuters (being picked up by the Jamaica Gleaner amongst others).

Now The Guardian have picked up the issue again, 100 days into a boycott of the pub that has reduced the Lewes Arms takings by 90%, become a legend in the beer world and has dragged Greene King back into the spotlight.

This story was picked up by Nick Cohen in The Observer who wrote:
Also see follow-up story in The Publican, the leading trade magazine.

Greene King makes locals more local
Landlords are to be given greater power to run local pubs after a shake-up by Greene King.

The brewer has been under fire in Lewes, West (?) Sussex, for removing guest bitter Harveys from the Lewes Arms. Regulars boycotted the pub and burnt effigies of Greene King management.

Today the company is splittting its managed house operations into local pubs, to be run by Jonathan Lawson and "destination" pubs headed by Jonathan Webster.

Lawson joined from sainbury's where he was director of the convenience store business. Webster was chief executive at Hardy & Hansons. Mark Angela who ran the business befored the split, is lraving with a year's salary of around £450,000.

Greene King said the move is not connected to its Lewes troubles. But chief executive Rooney Anand said: "Managers will be given greater autonomy and flexibility to match individual pub offers to local needs.

Greene King's 510 local pubs will focus on selling beer while its 280 larger "destination" pubs and hotels are to be food led.