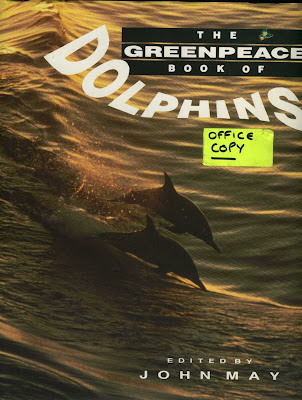 Back in the late 1980s when I was Editorial Director of Greenpeace Books, I was fortunate enough to be involved in the production of what, on second glance, is still a lovely book for all those who love dolphins and desire to know more about them. Also to be aware of the threats to their survival.

The book was published in 1990 by Century Editions in the UK and Sterling Publishing in the US and thus it is inevitable that a lot of the information is now dated. However, during the production of the book, we managed to pull work together from almost all the leading dolphin photographers in the world. In addition, the illustrator Martin Camm produced a unique and wonderful set of wildlife drawings, anatomically exact, including species that had never been illustrated before. Similarly, the evolutionary tree of dolphins was at the time bang up to date with fresh information incorporated. We also used Buckminster Fuller's Dymaxion projection for the background maps of global distribution.

The main text writer on the book was Kieran Mulvaney and the designer was Andy Gammon. Many experts contributed, as did all the global Greenpeace campaigners. 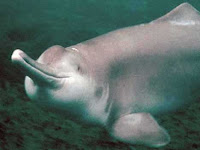 Since the book was published the Baiji or Yangtze River dolphin has been declared extinct. In a piece written for us by Mark Cawardine he reported: 'There was no effort to determine the number of surviving dolphins until 1979, when a three-year survey estimated a maximum of 400 along the entire length of the Yangtze. There has been a rapid reductions in the numbers in the years since. Today there could be as few as 200 baiji left.' Sadly conservation efforts came too late.

The New Scientist Environmental blog recently reported in a story entitled 'Dolphin Serial Killers' that: 'Scientists who autopsy cetaceans that wash up dead on British beaches have come to a grim conclusion: some species are being killed by bottlenose dolphins.' The photo (left) shows the rake marks on a harbour porpoise caused by a bottlenose dolphin.

Activists stage dolphin die-in at Japanese embassy in US [Sept 3, 2008] WASHINGTON (AFP) — Environmental and animal rights activists dressed as dolphins Wednesday staged a die-in in to protest what they called the 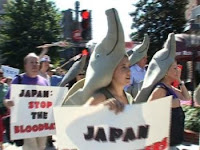 of brutally slaughtering some 20,000 dolphins and small whales every year in the "biggest massacre of its kind in the world," said the Animal Welfare Institute and Humane Society International, which organized the protest in .

On Google News I discovered the following story by Ednal Palmer, published in the 9th Sepetmber this year in the Solomon Star, the Solomon Islands leading daily newspaper. 'THE Government is urged to seriously consider resolutions reached in a recent workshop in Samoa on dolphins. Local environmental campaigner Lawrence Makili said at the moment the number of dolphins in our waters remain unknown.“Ignorance over this issue risks us giving away our natural riches and beauty, not knowing that one day we will desperately need them,” Mr Makili said.

He said the Samoa workshop, attended by marine scientists, concluded that live dolphin capture for international trade of indo–Pacific bottle nose dolphins threatened the survival of local dolphin population. The meeting was convened by the World Conservation Union.
This was in response to the international outcry by scientists and conservationists last year over the capture and export of 28 dolphins from Solomon Islands to the United Arab Emirates.

Scientists say there’s lack of scientific knowledge on local dolphin population. They say until an accurate account of the number is made, the removal of any of those mammals can threaten the survival of the species.

The Samoa meeting noted the rate of dolphins capable of leaving the Solomon Islands waters can reach 500 a year. “This is because 5 permits have been issued to individuals to export up to 100 each year and this was prescribed by the fisheries minister,” the workshop noted.

It says this would require a local population of at least 5,000 animals if the long-term survival of the population were to be ensured. Mr Makili said the government must understand these recommendations are aimed at preserving the nature and resources of the country.
at 10:05 pm