THE END OF PAPER ? 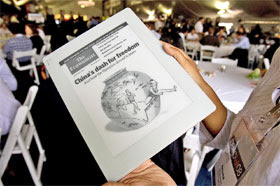 The product – scheduled to reach stores next year – uses the same electronic ink technology used in Sony's Reader Digital Book (below) and Amazon.com's Kindle (bottom). It also weighs the same (less than 1lb) but has a screen that measures 8½ x11ins - more than 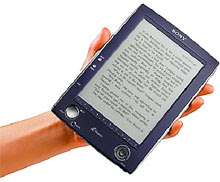 twice the size of either of the other devices - which is made of flexible plastic rather than the glass used in the others.

The device, which has yet to be christened, has roughly the same cover dimensions, thickness and weight of a typical issue of Newsweek, can store hundreds of pages of content and can be updated wirelessly. The prototype displayed a rotating loop of text and images switching from magazine cover to office documents and then a newspaper page formatted to fit on its screen. Its price will be revealed at the International Consumer

Electronics Show in in January 2009. 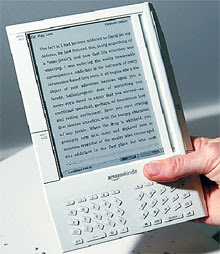 E-Ink developed the technology used in all three devices. The e-ink technology uses tiny, encapsulated balls, black on one side and white on the other. Electronic charges control whether the black or white side is displayed thus determining whether a black or white pixel appears on the screen. Electronic ink displays reflect light instead of emitting it. This makes them more visible in strong light and reduces power consumption.

Both E-Ink and its competitors Qualcomm have demonstrated colour versions of this technology.