INSIDE DOPE: LSD IN BRITAIN 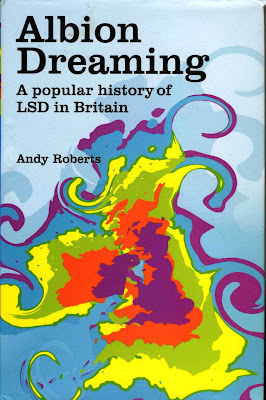 The history of LSD has been the subject of numerous studies in the past and the subject of a number of previous posts on The Generalist (see below). Andy Roberts new book 'Albion Dreaming' is a welcome addition to the literature as it breaks new ground by concentrating on the significant effects LSD had on British culture - the first such book to do so.

It is distinguished by a high-level of original research, including numerous interviews with key characters and material from previously unresearched government documents. The book is well-referenced throughout, has a interesting 16pp black-and-white photo section, and will prove a useful and reliable source to researchers and historians in many fields.Roberts writes from a counter-culture perspective in a readable non-academic style which makes his book also accessible to the general reader.

The book, he says, was written to redress the balance in what he sees as an American bias in previous LSD historical accounts and to restore 'Britain's status as a major crucible of LSD culture.'

He writes: 'In fact, LSD is a European export to America. The drug was discovered in Switzerland, the British pioneered LSD psychotherapy and military tests, and much of the counter-culture's underlying philosophy stems from British expatriates such as Aldous Huxley and Alan Watts. On a more fundamental level, at certain times, the bulk of the world's LSD was manufactured in Britain.'

The author has provided a useful chapter-by-chapter commentary on the book's contents, reproduced below, to which I have added additional thoughts and comments, based on my close reading of the text.

1. Turn on, Tune in, Drop Out: Introduction
The author refers to several interesting books of which I was previously unaware: 'Psychedelia Britannica' by Tony Melechi, 'Acid' by David Black and Paul Devereux's 'The Long Trip: A Prehistory of Psychedelia.'

2. Hofmann's Potion: Albert Hofmann's discovery and the history of LSD worldwide up to1952. Unusual facts about Hofmann's spiritual life prior to the discovery of LSD. Early distribution to the CIA and other military sources.

Sources the origins of the idea of putting LSD in the water supply to a conversation between psychiatrist Nick Bercel, the first medical professional in the to work with LSD, and the CIA. He told them that the chlorine in the water would make the drug innefective. Roberts recommends 'Acid Dreams' by Martin Lee and Bruce Shlain as the most comprehensive book on the history of the CIA's involvement with LSD in their search for the ultimate 'truth drug'.

3. LSD: The Cure of Souls?: The coming of LSD to in late 1952. Development of LSD/ psychotherapy at Powick and elsewhere. Unusual government connections with LSD psychotherapy unit at Powick. Interview with Dr Ronnie Sandison etc. The demise of LSD as a therapeutic tool. Dr Sandison's wife wrote to tell me (Ronnie is aged and unable to write) that this chapter was 'The best treatment of R's work I have seen in print'.

Centres on the above-mentioned interview with Sandison, who became Consultant Psychiatrist to 's from Sept 1951 to 1964. During this time he was supplied free LSD by Sandoz; he had met Hofmann there who had given him a present of a box of ampoules of LSD, making Sandison the first person to bring LSD to . Sandison and colleagues carried out LSD experiments on 36 patients with very difficult psychiatriic problems over the course of a year in 1953. Their report was the first article about LSD to be published in . The results were encouraging: 14 of the subjects recovered; 3 showed moderate improvement. Sandison's work was expanded and a special brick LSD unit was built, with the help of Dr Joel Elkes; Sandison was not aware at the tijme that Elkes had close connections with the Ministry of Defence (MOD). All this work was secret. Sandison believes that, by the mid-1950s, there were more than 10 centres in practicing LSD psychotherapy experiments; by the 1970s, therapy with LSD in had ceased completely.

The fascinating story of the LSD experiments at Porton Down (1953-54), instituted by MI6, and kept secret until 2002. Volunteers were duped into taking LSD without their informed consent. Lab testing resumed in 1961-62 followed by field trials with troops in 1964 and 1966. In March 1971, Porton Down traced soldiers involved in the '60s tests but the details of these follow-up interview have been lost. A detailed police investigation named Operation Antler into a wide variety of experiments carried at Porton (including the LSD tests) was initiated in 1999: its findings were submitted to the Crown prosecution Service (CSP) who concluded that nobody would face criminal charges. Three LSD test veterans waged their own legal compensation battle and settled out of court with the MOD for a reported £10,000 in February 2006.

5. The Joyous Cosmology: Intellectual precursors of the LSD generation focusing on British ex-pats: Aldous Huxley, Gerald Heard as well as David Solomon, Timothy Leary and co. How the counter-culture's philosophy was formed.

Much of the material on Huxley is well-known including his experiences on mescaline with Dr Humphrey Osmond, who later coined the term 'psychedlic. This led to his book 'The Doors of Perception', a line from William Blake. His first LSD trip was in October 1955. Less well-known characters are Captain Alfred M. Hubbard, credited with turning on 6,000 people to LSD and Michael Hollingshead, who similarly made it his mission to spread LSD widely. Huxley introduced Hollingshead to Timothy Leary, who first tripped out with trumpeter Maynard Ferguson and his wife in December 1961 on acid supplied by Hollingshead, who was also present. American writer David Solomon was literary editor for Playboy in the early '60s and published material by Leary and Osmond. Huxley he described as his 'guru extraordinaire.'

6. The Foggy Ruins of Time: Early recreational use of LSD in 1959-late 1965: Trocchi, Hollingshead, the Psychedelic Centre etc. Government and media interest.

A valuable chapter much of which was new to this reader, particular the central role of Scottish writer Alex Trocchi,
best known for the heroin memoir 'Cain's Book', here revealed as one of the first major importers of LSD into Britain. His flat in Notting Hill Gate was one of five main LSD pads of the time, the others being 101 Cromwell Rd (where Syd Barrett lived for a while and where Jagger, McCartney and Donovan visited), the luxurious residence of antqiue dealer Christopher Gibb in Cheyne Walk, and , both in . Hollingshead pops up throughout the narrative as does R.D. Laing. Retells the story of Vince Taylor, the first LSD rock casualty, the man on whom David Bowie based Ziggy Stardust and who Joe Strummer called 'the beginning of British rock 'n' roll.'

7. Strangely Strange, but Oddly Normal: LSD in in 1966. Early users and trials. John Esam. LSD in development of 's counterculture. ' Life's exposure of Hollingshead's activities. Terry Taylor and the Notting Hill LSD cult. The legislation against LSD and on what basis it came about.

1966 was the year when police arrests began in earnest and the national press began infiltrating the scene and publishing banner headline scare stories.Britain's first successful legal prosecution of freelance photographer Roger Lewis for LSD possession resulted in a £25 fine. Michael Hollingshead was sent to prison for 21 months, during which he took acid in Wormwood Scrubs with the Russian spy George Blake, who escaped from prison to shortly afterwards. New to me was the story of Teddy Taylor, the model for Colin McInnes novel 'Absolure Beginners'; his 1961 novel 'Baron's Court, All Change' contained the first fictional refernce to LSD in . In 1966, the UN called for world governments to put in place controls to prevent the manufacture, sale or use of LSD. In June the British Medical Journal called for LSD to be made illegal in . On July 21st, Roy Jenkins presented to Parliament a draft order calling for LSD to be incorporated into the Misuse of Drugs Act. On September 9th, LSD became illegal to possess or distribute in the , followed by the a month later.

8. Senses Working Overtime: LSD in in 1967. Pop stars and LSD use. The scene. BBC and LSD lyrics. The first LSD chemist and manufacturing and distribution network in .

Largely concerned with the crossover with LSD and the music scene. Documents the Stones' bust at , the News of the World's expose of Donovan's LSD lifestyle and LSD links to the Move, the Moody Blues and the Beatles. Also details of Victor James Kapur, the first LSD chemist to be busted in .

9. All You Need is Love?: LSD in 1968-73.Trial of first outlaw British LSD chemist. Tim Leary in . LSD and spirituality in . More on early LSD chemists. Hollingshead and the Isle of Cumbrae commune. Early sightings of Operation Julie participants.

This period saw LSD move from being a consciousness changing substance linked to the movers and shakers of the '60s to a cheap and widely available drug. Emphasises the importance of the 1971 Glastonbury Fayre festival, LSD's infiltration into the squatting movement, continued legal prosecutions and the early roots of the Free Festival movement and what was to become the biggest LSD manufacturing business in British history.

10. Bring What You Expect to Find:LSD and free festivals. How free festivals were focussed on and motivated by LSD. Fayre 1971 and LSD. Watchfield, Windsor, Meigan, Trentishoe, Wally Hope, Bill Dwyer, Sid Rawle.

A useful short history of the Free Festival movement, beginning with Phun City in 1970.

11. The Mind Alchemists: Operation Julie. This chapter analyses the Operation Julie LSD manufacturing and distribution ring. Contains recent information given by one of the main participants.A look at the events leading up to the trial, the trail and its aftermath from a counterculture perspective.

Little to add. Roberts points out that those interested in the fine detail of this story should consult 'Operation Julie' by Dick Lee (the head of the police operation) and Stewart Tendler and David May's 'Brotherhood of Eternal Love.'

Begins with Julien Cope of Teardrop Explodes and the Liverpool Club Eric's, the further rise of the Free Festival Movement, its untimely end in 1984 at the Battle of the Beanfield, the rise of the Peace Convoy, the emergence of Ecstasy and the rave culture, the Criminal Justic and Public Order Act 1984, the reemergence of blotter acid and the court case brought by participants in LSD medical experiments in the 1950s and 1960s against the NHS, who eventually paid out £195,000.

13. Revolution in the Head: LSD and the future of drug laws.

At the beginning of the new century, public interest was low, legal cases were small, siezure rates falling. Account of the case of the Brighton-based LSD chemist Casey Hardison, who was sentenced to 20 years imprisonment. A two -year investigation funded by the of Arts, published in March 2007, called for the legal status of all drugs to be reclassified in line with their potential for actual harm. In October that year, Richard Brumstrom, then Chief Constable of , called for a radical overhaul of the Misuse of Drugs Act. Prohibition, he claimed, causes five harms: increasing crime, overloading the crininal justice system, economic harm, undermining public health, destablisation of countries producing drugs, the undermining of civil rights. The book ends with the death of Albert Hofmann on 29th April 2008 and a quote from Aldous Huxley, in a letter he wrote to Hofmann:

' Essentially this is what must be developed: the art of giving out in love and intelligence what is taken from vision and the experience of self-transcendence and solidarity with the universe.'

Taking LSD the worst experience was I have ever had in life! thank Jesus I am not in a pyschiatric hospital.
God bless all
Stewart.