FROM THE ARCHIVE: STONEHENGE 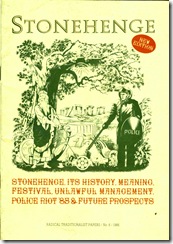 This 32pp-page booklet is an updated version of the original, published, as the intro of the new edition tells us, 'on Midsummer's Day 1985, three weeks after the shocking incident on 1 June, referred to within...This new edition retains the original purpose: to explain as clearly and concisely as possible the meaning of the Stonehenge temple, to demonstrate its use as an instrument for reconciling different and opposite instruments and to examine how it can be made once more to fulfill its designed function.’

The 'shocking incident' referred to has become known as The Battle of the Beanfield which, according to Wikipedia, 'took place over several hours on the afternoon of Saturday June 1, 1985 when Wiltshire Police prevented a vehicle convoy of several hundred new age travellers, known as the Peace Convoy, from setting up the fourteenth Stonehenge free festival at Stonehenge in Wiltshire, England after English Heritage, the owners of the site, persuaded the judiciary to grant an exclusion zone of some miles around the stones.

'The incident became notorious for accusations of a police riot that were reported to have taken place. Those in the convoy insist that, after a stand-off of several hours, police attacked their procession of vehicles by entering the field where they were being contained, methodically smashing windows, beating people on the head with truncheons, and using sledgehammers to damage the interiors of their coaches. The bean field was the next field down from where the vehicles were and when a large number of police entered the first field many of the convoy vehicles tried to escape by going through the beanfield, where they were pursued and arrested by police. The Police stated that they responded after they had earlier come under attack, being pelted with lumps of wood, stones and petrol bombs. The full account of the events remain in hot dispute.' 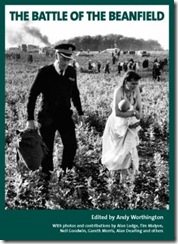 The best account to date of this incident appears to be ‘The Battle of the Beanfield’, edited by Andy Worthington, with photos and contributions by Alan Lodge, Tim Malyon, Neil Goodwin, Gareth Morris, Alan Dearling and others. [Enabler Publications, June 2005. ISBN 0 9523316 6 7. 240 pages, 102 photos and illustrations, three maps]

There are numerous YouTube videos of this incident including the following:

'Battle of the Beanfield' at Stonehenge 1985. 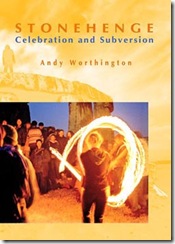 The blurb reads: This innovative social history looks in detail at how the celebrations at Stonehenge have brought together different aspects of British counter-culture to make the monument a ‘living temple’ and an icon of alternative Britain.

'The history of the celebrants and counter-cultural leaders is interwoven with the viewpoints of the land-owners, custodians and archaeologists who have generally attempted to impose order on the shifting patterns of these modern-day mythologies.'

'The story of the Stonehenge summer solstice celebrations begins with the Druid revival of the 18th century and the earliest public gatherings of the 19th and early 20th centuries. In the social upheavals of the 1960s and early ‘70s, these trailblazers were superseded by the Stonehenge Free Festival, which evolved from a small gathering to an anarchic free state the size of a small city, before its brutal suppression at the Battle of the Beanfield in 1985.

'In the aftermath of the Beanfield, the author examines how the political and spiritual aspirations of the free festivals evolved into both the rave scene and the road protest movement, and how the prevailing trends in the counter-culture provided a fertile breeding ground for the development of new Druid groups, the growth of paganism in general, and the adoption of other sacred sites, in particular Stonehenge’s gargantuan neighbour Avebury.

The account is brought up to date with the reopening of Stonehenge on the summer solstice in 2000, the unprecedented crowds drawn by the new access arrangements, and the latest source of conflict, centred on a bitterly-contested road improvement scheme.'

For those interested in the archaeology of Stonehenge, the June 2008 Issue of National Geographic had an excellent cover story 'If The Stones Could Speak' by Caroline Alexander.In brief, recent investigations had spread out from the stones themselves into the wider surrounding landscape. It now seems abundantly clear from this that Stonehenge was the key part of a much broader sacred landscape that we are only now beginning to understand.
Fascinating stuff. See also NG's multimedia feature 'Stonehenge Decoded'