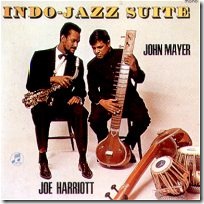 Indo-Jazz Suite (1966) is one of my favourite records of all time. I still have my original mono vinyl copy from my schooldays back in the 1960s and still play it on a regular basis. I think this was the first record in the UK that featured a sitar, certainly the first to mix east/west music in this way. Check it out.

So delighted to purchase this morning a re-issue of two further Indo-Jazz albums on one disc - 'Etudes' and 'Radha Krishna' which I'm grooving to as I write these words. Beautiful stuff

Its out on the very interesting First Hand Records  label. According to their blurb:  'John Mayer's success through the 1960's with Indo-Jazz Fusions saw the release of four LP's over a four year period. Indo-Jazz Suite (1966), Indo-Jazz Fusions (1967) ,Indo-Jazz Fusions II (1968), and Etudes (1969) which is the only LP not to have been re-released until now. Radha Krishna was originally released by EMI in 1971. Comprising of a large ensemble, including sitar, tabla, drums, sax, string trio, soprano, tenor etc... this ground breaking recording (along with Etudes) has been wonderfully re-mastered at Abbey Road Studios.

Read more about the history of Indo-Jazz Fusions here

A more detailed account of these musical adventures can be found in Chapter 10 of  the biography 'Joe Harriott: Fire In His Soul' by Alan Robertson [Northway Publications. 2003]

Read the Wikipedia entry on Joe Harriott, who  died in 1973

See Obituary of John Mayer here. He died on March 9, 2004, after being struck by an automobile. He was 73 years old.