BARRY MILES: BOSWELL OF THE UNDERGROUND 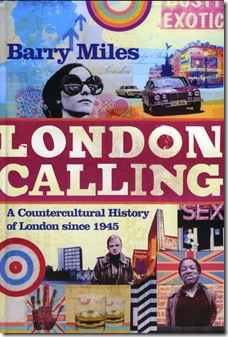 This chunky portmanteau of a book is the latest  addition to  a whole shelf of works by one of the great chroniclers of post-1945 underground and countercultural activity.

Miles was in the right place in London of the 1960s. A close friend of Paul McCartney’s, he helped found the Indica Bookshop and International Times  and was in the thick of the action. His personal account of this period  - ‘In The Sixties’ [Jonathon Cape] – is one of his best works. He also authored ‘Hippie’ [Cassell Illustrated] one of the best picture books of the 1965-1971 period. Also recommended are his biographies of Kerouac, Ginsberg and Burroughs –  the last two of which were his personal friends- and his excellent books on Frank Zappa and Charles Bukowksi.

‘London Calling’ could well have been entitled ‘Soho Calling’ (a central London district whose name is derived from Soho! – an Anglo-French hunting call)  as much of the book focuses, quite rightly, on this fecund neighbourhood which was the hub, crucible and junction box of so much of modern bohemian, beat, rock, pop, jazz, folk, fashion, drug and crime activity. From  a network of clubs, cafes, coffee bars and pubs emerged hybrid forms and styles that shook up old black and white Britain, creating sounds and visions that resonated around the world.

The book takes us on a long and fascinating journey from the bohemians and eccentrics of Fitzrovia to the YBAs of the Groucho Club via  a multitude of individuals, scenes and locations.

The book’s massive bibliography attests to the breadth of Miles’ reading and one of this work’s great values is that it provides the general reader with a broad introductory overview of this voluminous wealth of historical and first-hand biographical accounts. In this book, Miles stays outside of the narrative but informs it with his first-hand knowledge and experiences.

As an aficionado of underground culture and a participant in many of the scenes described during my days at the underground press and the NME (I’m named in the book’s Acknowledgements)   much of the book is  familiar territory. I also spent more than a year myself researching Soho culture of the 1940s and 50s for a project that never quite got off the ground. [See PREVIOUS POST REWRITING MUSIC HISTORY] Thus I am not your average reader.

That aside, I found a great deal of fresh detail that fleshed out my existing knowledge and the book introduced me to individuals, groups, events and occurrences that I was previously unaware of. I particularly enjoyed the chapter on the making of the  movie ‘Performance’ which told me much I didn’t know about one of my favourite films.

So hats of to Miles (friend and colleague) not just for this book but also for a industrious lifetime documenting and archiving  the fast-moving tides of modern counterculture in a readable and accessible manner. We are all in his debt.

[London Calling by Barry Miles is published by Atlantic Books (£25)