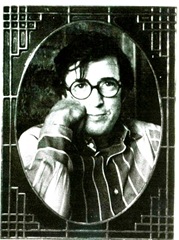 I have become fascinated by the novels of Arthur A. Cohen (1928-1986)  and increasingly intrigued about this man’s life and accomplishments.

The web holds very little. A Wikipedia entry is dominated by one large   biographical quote – taken from   a 1987 review by Morris Philipson in the New York Times, of a book of novellas by Cohen entitled ‘Artists & Enemies’ – from which we learn that he wrote five novels, nine works of nonfiction, edited five books and engaged in wide range of activities and interests. Philipson writes:

‘…his interests and activities were scattered among a number of other, seemingly unrelated, concerns. He was co-founder of the Noonday Press and founder of Meridian Books, and then editor at Holt, Rinehart & Winston, E. P. Dutton and Viking. He was also a theologian, presumably working on his contributions to the encyclopedic ''Contemporary Jewish Religious Thought'' …at the same time that he was finishing ''Artists & Enemies.'' He collected rare books, later became a rare-book dealer, and he created the catalogues of Ex Libris on the major movements of 20th-century art.’

Philipson concludes: ‘In the meanwhile, let it be said that Arthur A. Cohen was a thinker and an artist who made friends and enemies.’

The whole of ARTIST & ENEMIES is accessible at Google Books

Even more intriguing is this opening extract from the following review by Julian Levinson of ‘Arthur A. Cohen's Resplendent Vision’ , edited by  David Stern and Paul Mendes-Flohr. [Detroit: Wayne State University Press, 1998 ] The book is a Reader of Selected Fiction and Writings on Judaism, Theology, Literature, and Culture. Its is partially available at Google Books.

‘There were perhaps five different Arthur A. Cohens, and nearly all had cult followings. In order of appearance (roughly speaking), they are: Cohen the neo-Orthodox Jewish theologian; Cohen the astonishingly successful book publisher, herald of the “paperback revolution''; Cohen the magnanimous organizer of salon gatherings and anthologies; Cohen the aggadic novelist; and Cohen the challenging and occasionally cryptic post-Holocaust theorist. A few additional selves might be teased out of his variegated life, but at least these five deserve separate mention. Their areas of accomplishment were discrete, as were, in many cases, their audiences. At the time of his death, fifteen years ago of leukemia at the age of 58, Cohen had no lack of admirers; his inclusion in Dan Cohn-Sherbok's  ‘Fifty Key Jewish Thinkers’ (of all time) is testimony to the seriousness with which he has been taken. At the present moment, however, it seems that his posthumous fate is hanging in the balance. Perhaps the very fact of his versatility has made categorization too strenuous a task…’


[The full text is available through Project Muse but you have to subscribe! By the way aggadic , as far as I can work out, refers to the narrative tradition of Judaism, including history, science, folk-history, and legend.)

These are the three novels I have recently read 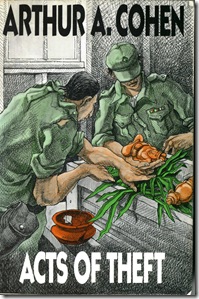 This book has haunted me. First published in 1980, I think I read and possibly reviewed it at that time. Recently I found it again, reread it – and it stunned me. This is one of the great books about the essence of  sculpture. Its was this second read that delivered the book to me full force.

The plot begins in Mexico with the theft of the title, organised by a sculptor who collects and deals with illegal artefacts. The book opens with the crime and then abruptly shifts focus to the earlier life of the sculptor and follows his experiences in Europe working with the sculptor Constantin Brancusi and then follows his journey to stay with the Haida peoples in remotest Canada before returning to the original story. The crime is being investigated and the trail eventually leads to the sculptor and a satisfying and meaningful conclusion. This is wonderful novel, full of deep insight into the whole creative process of sculpting and its primitive roots. But also a gripping and absorbing read. 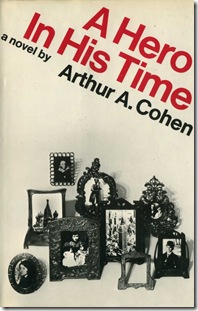 Excited to read more, I found this second-hand hardback copy of another marvellous novel. This time the focus is poetry.

The book’s main character is a poet who has negotiated his path through repressive Soviet culture, keeping his head down, not making waves, and securing a job as editor of a journal of folk music.

The tone of the book carries that dark humour that characterises much of modern Russian literature. It reminds me of Bulgakov. The unfortunate character unexpectedly gets selected to form part of a cultural mission to New York, at which he must deliver a coded poem to a contact. After years of non-engagement, he finally finds his courage. This is a wonderful read, full of laugh out loud humour. Partially available on Google Books 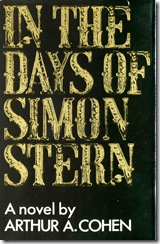 From there I tackled what is considered Cohen’s masterpiece. This is a long deep and complex read that draws on a wealth of Jewish folklore, mysticism, and legend.

The book begins with Stern’s father as a young man, lured to the flat of a prephetess who tells him he will sire the new Messiah. The way he will know if he is truly the Messiah will be if his son is responsible for his parent’s death.

Stern’s parents leave for America, events unfold. The young Simon work his way steadily to becoming a millionaire and the the foretold tragedy ensues. On the back of this, Stern has a vision of his purpose and organises the building of a fortified sanctuary in New York City and then travels with companions to the death camps of Europe and rounds up survivors to come and live in his specially built complex. Dark events unfold.

This is a deep and complex book, full of wisdom. I am sure that, on a first read, I have only picked up on some of the aspects of its multi-level meaning. It is a stunning work.

The New Yorker had this to say (unable to access the original review:

"This stately, ambitious amalgam of Jewish myth, history, theology, and speculations on the Jewish soul is like an enormous Judaic archeological ruin—often hard for the uninitiated to interpret, but impressive. . . . Intelligent, inventive, fascinating."

These three novels are available from the University of Chicago Press