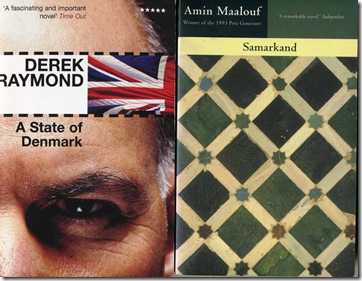 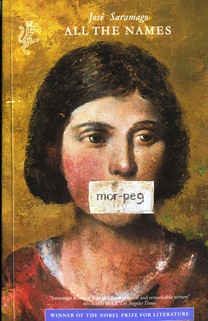 Derek Raymond, widely credited as the father of British noir for his series of ‘Factory’ novels (you need a strong stomach), wrote this dystopian novel in 1970. The main character is journalist Richard Watt, who is living a quiet life of exile in the Italian countryside. Britain has become a dictatorship, run by the ruthless politician named Jobling, who Watt wrote an expose on before he came to power. Forced to return to the New Britain that Jobling has created, Watt comes face to face with its frightening reality. In a tradition that includes Orwell’s 1984, Ken Brownlow’s ‘It Happened Here’ and Constantine Fitzgibbon’s ‘When The Kissing Had To Stop’, ‘A State of Denmark’ is a haunting what-if read.

By contrast Lebanese journalist and writer Amin Maalouf’s ‘Samarkand’ is a magical exploration of the life of Omar Khayaam and the fabled city of the title. The  book  begins tantalisingly with the information that the only original copy of the Rubaiyaat went down with the Titanic.  We are then plunged into the world of 11th-century Persia, brilliantly realised, following the adventures of Khayaam (his love affairs, his narrow escapes from death) and the magic book he has created, in a skilful blend of fact and fiction. One of the book’s other major characters is Hassan Sabbah – a latterday Osmama bin Laden - whose disciples were contemptuously described by his enemies as hashishiyun (‘hashish smokers’), which has widely been considered the origin of the word ‘assassin’. Maalouf corrects this, writing that ‘Hassan liked to call his disciples Assassiyun,  meaning people who were faithful to the Assass, the ‘foundation’ of the faith. Beuatifully written, this entrancing saga has important contemporary relevance,giving readers in the West a deeper understanding of the roots of Iran and Khayaam’s towering importance.

Nobel prize winner José Saramago, one of the greatest of Portugese novelists alongside Pessoa, recently died. His legacy is a series of deep novels which I am continuing to gradually explore. Some years back I read ‘The Cave’, a wonderful book about an old potter and his dog (a wonderful characterin his own right) which was unlike anything else I had ever read. ‘All the Names’ is equally unusual and centres round the life of Senhor José, a humble clerk in the city’s Central Registry, a vast Gothic archive where the basic details of all citizens, alive and dead, are carefully documented in mass banks of card files by a cadre of bureaucrats, rigorously organised, whose lives are dominated by this suffocating and cloistered world. Jose’s life is upturned by chance when he accidentally finds a record of an unknown woman and sets out (illegally and clandestinely) to find out who she was. Saramago is the polar opposite of  Cormac McCarthy, who’s recent books ‘No Country for Old Men’ and ‘The Road’ are  virtually entirely composed of short sentences. Saramago, by contrast, writes in huge compound sentences that often fill an entire page. The book is chapterised but the chapters have no paragraphs, thus the text looks quite daunting. Once ensnared in his tale, which becomes curiouser and darker as it progresses, one realises that one is in the hands of a master storyteller who seems able to reach into other dimensions of time and space and describe and inhabit states of mind beyond our ken. His characters have many dimensions and  subtleties and the worlds he creates have an intensity that haunts the mind.

In his 1998 Nobel Prize lecture, entitled ‘How  Characters became the Masters and the Author Their Apprentice’ :

‘Saramago outlined the progression of his novels, explaining how each protagonist's journey paralleled his own life, and that each of his creations was also partially responsible for creating him. "Letter-by-letter, word-by-word, page-by-page, book after book," he said, "I have been successively implanting in the man I was the characters I created.’ [Source: L.J. Lindhurst at The Modern Word]

Saramago’s obituary in The Guardian