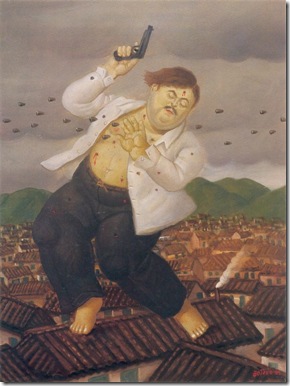 This iconic image by Botero of the most notorious drug lord of the modern era, gunned down on the rooftops of Medellin, a city he had made his own, is a fitting lead-in to a discussion of ‘My Father Pablo Escobar’ an extraordinary documentary by Nicholas Entel, to be released on DVD by Brightspark Productions on 12th July

Following Escobar’s death in 1993, his wife and only son have lived in virtual exile in Argentina. After a decade of silence, they have opened up their lives and family archive to speak of and show the extraordinary life story of the cocaine king who almost became President of Colombia.

We see intimate family portraits and home movies of the Escobar’s home life at his massive Hacienda Napoles, a place of bizarre luxury. One of Escobar’s obsessions was buying unusual animals for his private estate, often for millions, one of the few ways he could spend the vast ocean of lucre pouring in from his international industrial-scale cocaine business. 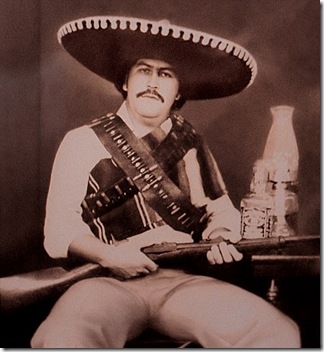 The footage of Escobar’s war against the Colombian government is chilling. Its one thing to read about these issues, quite another to see the ground truth - assassinations, car bombs, mutilation, extortion. Escobar’s attitude to the State was simple: accept money or face bullets. One of his most extraordinary manoeuvres was to first get the Colombian constitution changed to ensure he could not be extradited from the country, then to give himself up to the authorities, then to build his own prison for his incarceration – with luxurious quarters and facilities from which he continued to run his drug empire.

The story is narrated and driven by Escobar’s only son – Juan Pablo Escobar (now known as Sebastian Marroquin) -  who was just eight years old at the time of his father’s death. What makes the film so moving and what gives it such a powerful narrative drive, is Marroquin’s efforts to make contact with the families of the Colombian politicians that Escobar had murdered – Luis Carlos Galan and Rodrigo Lara Bonilla – to make his peace with them and break the cycle of revenge.

This powerful story reminds us once more of the huge damage that the drug wars are causing to Latin America societies(see Previous Posts below). It is also a moving story about fathers and sons. Escobar’s last act was to make a desperate call to his family from his Medellin hideout. It was traced and within hours Escobar had been gunned down. 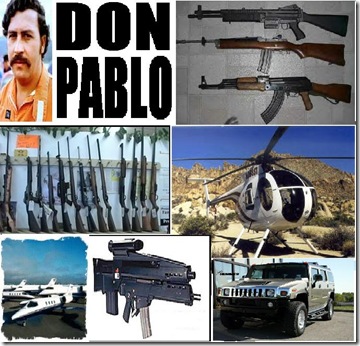 Two movies were announced in 2007. Both are listed by IMDB as still being in development.

Killing Pablo   is based on Mark Bowden’s book Killing Pablo: The Hunt for the World's Greatest Outlaw The cast for the film was reported to include Christian Bale.

Escobar  is based on the book "Mi Hermano Pablo" by Roberto Escobar Gaviria and is being directed Antoine Fuqua for a 2012 release. Producer is (or was) Oliver Stone.

See: Johnny Depp talking about the movie Blow in which he plays the part of George, Escobar’s first drug contact in the US.

According to Wikipedia: ‘[Escobar] is regarded as the richest and most successful criminal in world history because, in the year 1989, Forbes magazine declared Escobar as the seventh richest man in the world, with an estimated personal fortune of US$ 25 billion. He owned innumerable luxury residences and automobiles and in 1986 he attempted to enter Colombian politics, even offering to pay off the nation's $10 billion national debt.’ [This last fact is repudiated in the film)