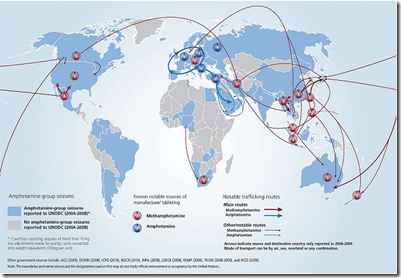 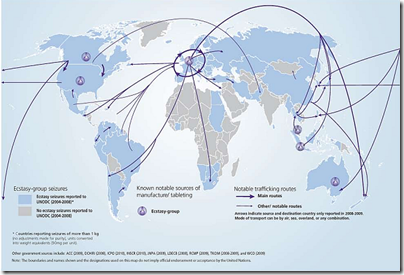 The report estimates that an estimated 161-588mt of amphetamine-type stimulants (ATS) and 55-133mt of ecstasy were manufactured in 2008. During 2008-2009, the number of amphetamine users worldwide ranged from 14-53 million; number of ecstasy users from 10-26 million. 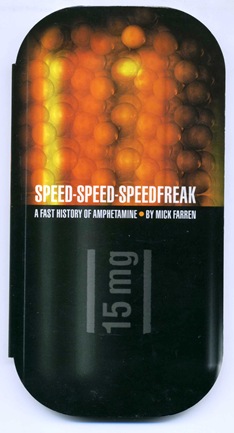 Hot off the press from Los Angeles comes this capsule-shaped book – a publishing first (?) – in which Mick Farren takes the reader through a ‘fast history’ of amphetamine, first synthesised by Romanian chemist Lazar Edeleanu at the University of Berlin in 1887.

In the almost 125 years since then, its various forms and derivatives have permeated global society and culture, fuelling factory workers and truck drivers, criminals and soldiers,musicians and writers, mods and gays who desired the benefit of its side effects – alertness, euphoria, heightened physical energy, prolonged stamina, rapid verbalisation, enhanced concentration, boosted confidence and intensified sex drive.

Amongst famous users were Hitler, Jack Kennedy and Anthony Eden, Jack Kerouac, and a whole raft of singers and entertainers including Elvis, Johnny Cash, Hank Williams, the Beatles and the cast of Andy Warhol’s Factory.

Mod and punk were two musical/style movements in which amphetamines played a major part. XTC or psychedelic speed fuelled club and rave culture

Amphetamines were extensively used on all sides during the second World War, were ubiquitous in Vietnam and remain in widespread use in current conflicts.

Farren tracks the development of ‘ice’ or ‘crystal meth’ and documents the involvement of the Hell’s Angels in the amphetamine trade and how this is now largely dominated by various Mexican gangs.

Also touched on is the use of Ritalin and Adderall by US schoolchildren, a supposed cure for ADD and ADHD.

Farren, lead singer of the freak 1960s/70s band the Deviants is no stranger to amphetamines and he paints vivid pictures of the scene in the back of their van when the band were coming down whilst driving back from the gig. Also of stumbling across Ladbroke Grove with Lemmy of Motorhead, a band named after a street term for speedfreak.

The book carries no health warnings but its numerous dark stories of come-downs, paranoia and violent incidents will make it clear to any reader that sustained amphetamine use comes with a hefty downside.

[‘Speed-Speed-Speedfreak: A Fast History of Amphetamine ‘ by Mick Farren is published by Feral House.] 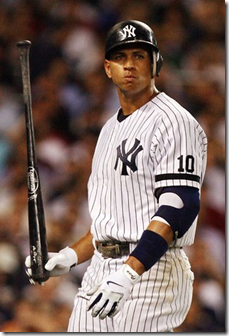 On the 4th August 2010, baseball player Alex Rodriguez became only the seventh member of the Major League Baseball’s 600 home-run club which currently stands as follows:

Acording to PopFi.com: Bonds, Sosa and Rodriguez are all rumoured to have used or admitted to using steroids and ‘baseball’s ban on performance enhancing drugs and amphetamines has declined hitting numbers all across the board, which explains the massive explosion of no-hitters throughout baseball this season.’