The big theme of this blog is connectivity between people, places, things and ideas, and its content is often driven by chance and coincidence – as in this post.

A few days back I 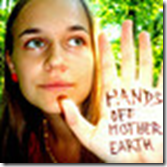 discovered Hands off Mother Earth (HOME) -  a Stop Geoengineering protest site. You can add your photo protest pic. They are against geogineering in general and target four such projects in particular: biochar, ocean fertilisation,cloud whitening and artificial volcanoes

PLANET NEWS (Sept 2007) we noted  The Climate Engineers, an excellent and detailed essay by James R. Fleming [The Wilson Quarterly.Spring 2007]  A full pdf of the piece can be found on the writer’s website: Selected Works of James R Fleming. Fleming is Prof of Science, Technology and Society at Colby College in Maine.

‘As alarm over global warming spreads, a radical idea is gaining momentum. Forget cuts in greenhouse-gas emissions, some scientists argue. Find a technological fix. Bounce sunlight
back into space by pumping reflective nanoparticles into the atmosphere. Launch mirrors into orbit around the earth. Create a planetary thermostat. But what sounds like science fiction is actually an old story. For more than a century, scientists, soldiers, and charlatans have hatched schemes to manipulate the
weather and climate. Like them, today’s aspiring climate engineers wildly exaggerate what is possible, and they scarcely consider political, military, and ethical implications of attempting to manage the worlds climate with potential consequences far greater than any their predecessors were ever likely to face.’

In STEWART BRAND: REINVENTING ENVIRONMENTAL THINKING [October 2009] we discover that Brand is in favour of geoengineering. The coincidence part of our story stems from the fact that, later the same day I discovered HOME, I found this book in a cardboard box outside my favourite discount book store in Brighton. It was £2.  It knocked me sideways. It is about geoengineering using nuclear bombs and one particular project which I was criminally unaware of: Project Chariot. Here is the skinny:

Following the development and deployment of atomic bombs in the 1940s, both the US and Russia conducted numerous atmospheric nuclear tests during the 1950s. Concern about the negative image of nuclear weapons, a concept of Atoms for Peace was developed and championed, principally by physicist Edward Teller who successfully established his own lab – Lawrence Livermore – to further these notions.

‘At its height Plowshare employed 290 people and spent $18 million annually to recast the bomb as a peacetime tool. Physicists became public works engineers and set about to correct “a slightly flawed planet.”

“To remedy nature’s oversights,” detonations would gouge out canals and “instant harbours".” They would slice through mountain ranges. Edward Teller spoke of “a new and important discipline,. Geographical engineering. We will change the earth’s surface to suit us.”

Project Plowshare’s principal aim was  to create a new sea-level Panama Canal. In order to fulfil such a project, they needed a test site to try out the techniques of atomic earth-moving. The point they chose was Cape Thompson in northern Alaska, where they planned to create a new  harbour. 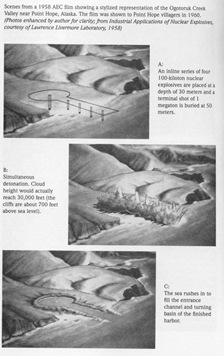 Project Chariot, as it was named, was spiked by the activities of a few key scientists, conservationists and organisations and the steadfast opposition of the Inuit people of Port Hope.

Dan O’Neill has done an exemplary job in presenting the story in vivid detail. In the course of his research he managed to get a huge amount of secret material declassified.

It was his research that in 1992 uncovered the fact that nuclear waste in the form of radioactive dirt had been buried at Cape Hope during Project Chariot without the knowledge of the local Inuit. This developed into a major issue and a costly clean-up.

US Biologist/activist Barry Commoner, who has been variously described as ‘the dean of the environmental movement’ and ‘the father of grass-roots environmentalism’ had this to say in 1988:

‘I think, in so far as I had an effect on the development of the whole movement….Project Chariot can be regarded as the ancestral birthplace of at least a large segment of the environmental movement.’

The environmental study carried about by Alaskan biologists to try and determine what effect the atomic bombs would have on the local ecosystem, was the most comprehensive environmental program ever done at that time; it can be considered the first environmental impact statement (EIS).

The Inuit of Port Hope, the population who were closest to the Chariot test site, founded Tundra Times to promote their opposition to the project. The issue of Native land claims formed a core part of their arguments and their campaign can rightly be seen as the start of a process that led to the passage of the Alaska Native Claims Settlement Act of 1971, which conveyed 40 million acres to the Inuit people and awarded them $1 billion compensation for lands already lost.

This remarkable and important book should be more widely known.