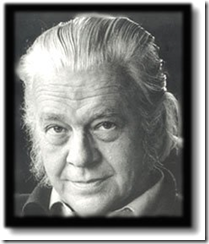 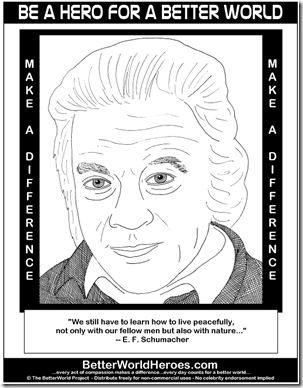 "There could be no clearer example of the prevailing dictatorship of economics… That nuclear fission represents an incredible, incomparable, and unique hazard for human life does not enter any calculation and is never mentioned."

To submit to the nuclear lobby, he continues, "is a transgression against life itself, a transgression infinitely more serious than any crime ever perpetrated by man. The idea that a civilisation could sustain itself on the basis of such a transgression is an ethical, spiritual, and metaphysical monstrosity."

- Schumacher on "the so-called peaceful use of atomic energy"

[For an interesting contrary view see: Small is Beautiful, even for Nuclear Fission Reactors By Rod Adams [‘Atomic Insights’ blog]

It was a shock to see the name E.F. Schumacher in The Observer on Sunday. He was the subject of a lengthy profile by Robert McCrum entitled ‘EF Schumacher: Cameron’s choice’

Back in the 1970s Schumacher was one of the thinkers of which we all took note, particularly his classic work ‘Small is Beautiful’

The key hook of McCrum’s piece, which does a good basic job of introducing Schumacher, is to highlight the claimed influence that Schumacher’s ideas have had on David Cameron personally and on the concept of the Big Society. The Generalist remains sceptical on this point. McCrum writes;

‘Long before our current crisis, Schumacher and his ideas were attracting attention here in the UK. Several of the better themes of David Cameron's widely disputed "big society" are indistinguishable in their ambition from parts of Small is Beautiful. The prime minister, indeed, has long been interested in Schumacher's ideas. Almost immediately after becoming leader of the Conservative party, Cameron addressed the Soil Association, engaging with key aspects of the Small Is Beautiful message. Schumacher always said that his arm would wither if he voted Conservative, but he turns out to be a natural godfather for the coalition.’ 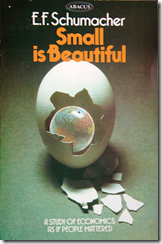 Small Is Beautiful: Economics as if People Mattered

A Guide for the Perplexed

Small is Beautiful: An Introduction to E.F. Schumacher by Noah Enelow. [Source: Field Guide to the US Economy/5th Feb 2004]

Organisations with direct links to Schumacher

Practical Action, formerly called the Intermediate Technology Development Group (ITDG), was set up by Schumacher in 1965 to fill what he called the 'technology gap' in the developing world.

The Schumacher College in the UK provides individuals and groups from across the world with the opportunity to learn on numerous levels about subjects relating to environmental and social sustainability.

The Schumacher Society USA is an educational non-profit organization founded in 1980. The Society has ‘transitioned’ into the New Economics Institute which  works in close partnership with the New Economics Foundation in London

The Soil Association UK exists to research, develop and promote sustainable relationships between the soil, plants, animals, people and the biosphere, in order to produce healthy food and other products while protecting and enhancing the environment. Schumacher became President of the Soil Association in 1970.