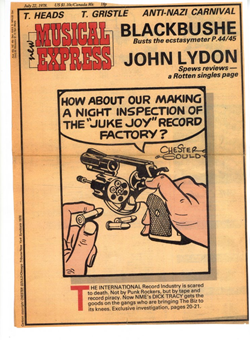 In this second post related to the publication of Pat Long’s ‘The History of the NME’ I would like extend my personal gratitude to him for taking the space to include mention of the freelance work I did for the NME between 1975 and 1983 as follows: 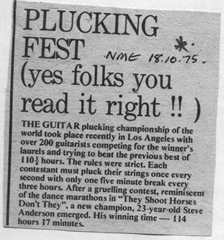 The very first story I had published in the NME

‘ Under the auspices of IPC, NME carried on the ethos, style and content of the underground press well past punk, up to the end of the decade and beyond.

In 1976, John May, an old friend of Kent's from Frendz began to contribute to the paper, both under his own name and a pseudonym, Dick Tracy. May's forte was serious investigative journalism and NME readers soon found lengthy and well-researched pieces on human cloning, the recently founded militant Animal Liberation Front, record piracy or the environment running alongside the usual interviews with Graham Parker, Thin Lizzy or Pink Floyd.

Elsewhere the magazine ran a regular drugs news and information column called, perhaps inevitably, 'The Inside Dope', and providing in-depth coverage of Operation Julie, in which undercover officers disguised as hippies provided surveillance evidence leading to the closure of industrial-scale LSD laboratories across Britain.

John May also worked with Ian MacDonald to produce a special four-page NME Guide to the Nuclear Age, a serious and chilling examination of the effects of a disaster at one of Britain's nuclear power stations which made the front of the magazine in June 1977. It was a bold and even foolhardy choice of cover, followed swiftly by a return to business as usual in the form of a Stranglers interview on the front of the following week's issue.

But May and MacDonald's investigation reflected the broad range of interests held by the people who produced this paper each week and the high regard with which they viewed their readers.

In 1980, Andrew Tyler left NME to set up the charity Animal Aid, while the paper played a large part in the formation and promotion of the renewed anti-Nazi and and-Racism movement in Britain.

I do not want to be nick-picky but its important to try and get the historical record straight as follows:

1. For some time back, before I arrived, the NME had carried some non-musical features on films, books and the like. Further such material also formed part of Thrills – a lively ever-changing section with a mix of news, weird and wonderful stories, cartoons etc. During my time this was first edited by Mick Farren, who got me onto the paper and was one of my great supporters. When Mick left, the section was taken over by Phil McNeill. Phil really took a leap of faith to support some of the stories and investigative pieces I did.

2. I was the first journalist on the paper who wrote about anything that wasn’t music, although I did stray into that area from time to time. [I did review a Johnny Thunders & The Heartbreakers gig/w. Siouxie and the Banshees at the Music Machine in 1977] 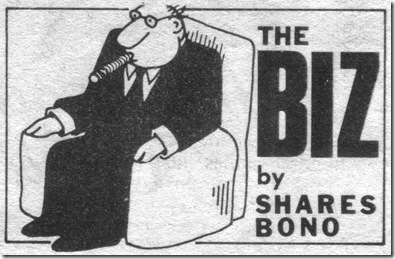 There was no tradition of investigative journalism in the paper’s history before. I was the first to investigate the music business, based on close reading of the music trades and my own research. For a time, I did a column called ‘The Biz’ by Shares Bono with others.

3. I invented and wrote the column ‘Inside Dope’ which appeared sporadically for many years. At that time, the police were busting individuals for even minute amounts of dope and many young people were being imprisoned for minor drug offences. I regularly took phone calls from anxious mums all over the country whose sons had been busted. This was the first and last time there was ever a regular drugs column in a national publication.

I also wrote the feature piece on Operation Julie [See below] which was a serious piece of work that matched and challenged the coverage of the trial carried in the mainstream press. 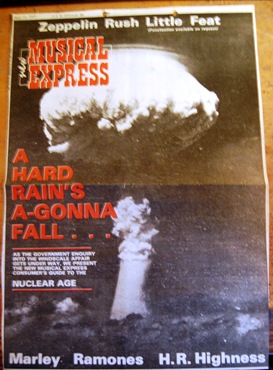 4. Re the ‘NME Guide to the Nuclear Age’: Ian McD was certainly sympathetic to what we were doing but it was Angus McKinnon who was the lead editor and ( I believe) did some writing on the project. The main part of text was written by myself and my colleagues from the Index of Possibilities – John Trux, Michael Marten and John Chesterman. The supplement was half and half about nuclear weapons and nuclear energy and covered the work of CND and Friends of the Earth. It was published just days before the notorious Windscale Inquiry over the proposed expansion of the reprocessing plant. It may not have helped sales but it was a major publicity blast for the anti-nuclear movement. Hats off to Nick Logan for going with it. It’s an iconic moment in the paper’ history. 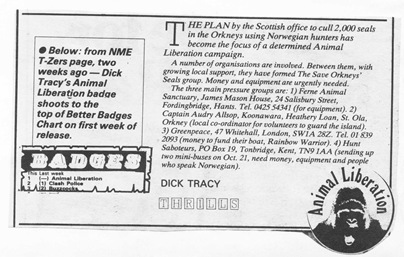 5. Under Neil’s editorship, Andrew Tyler picked up the baton and wrote a steady stream of lengthy pieces on a wide range of important social and political issues. I had already written a string of pieces on the Animal Liberation Front and the Save the Whale movement in particular. On the back of the NME coverage, I was able to develop and launch an independent magazine ‘The Beast’ – one of the world’s first animal liberation mags. [SEE PREVIOUS POST]. Andrew did not found Animal Aid (it was started in 1977) but he did run it subsequently for many years.

6. One of the other main contributions I made to the paper was the film coverage, which I was initially in charge of.

A new section called ‘Sideswipe’ was created which was used for not only for films but also books and other cultural stuff. My first review – of the Arthur Penn western ‘The Missouri Breaks’ with Marlon Brando and Jack Nicholson – was published on June 19th, 1976.

Its hard to think of it now but, at the time, just before the launch of Star Wars, cinema audience attendance figures were in serious decline. The whole British film industry was concerned. As part of this new role, I was taken up to the IPC Board room for a lunch with IPC executives and representative of the leading film distributors in Britain. I was given a promise of access to all areas and first-run exclusive interviews and news. That’s how I got  a major interview with Spielberg on the release of Close Encounters of A Third Kind. [See below]

Many of the paper’s writers did film reviews, features and interviews as well. Mick interviewed Kenneth Anger and I think Tony Parsons met Sylvester Stallone, for instance. I also did a regular Teasers-type film column initially called ‘Screen Dreem’ and later ‘Silver Screen’, mainly about upcoming films, with material I gleaned from Variety and The Hollywood Reporter.

7. There is another book to be compiled of all the non-musical material in the paper, written by many writers. Bear in mind, many of the musicians were also politically involved.

8. As well as the better-known names, what made the NME such a great place to work at that time, was the number and variety of great writers

NME: Adventures in the Music Press A previous memory dump about my time at the NME 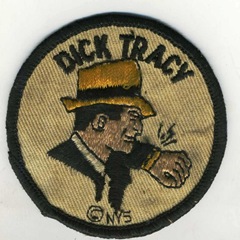 NME/Plastic People of the Universe