INSIDE DOPE: FIRST IMAGES OF LSD EFFECTS ON HUMAN BRAIN 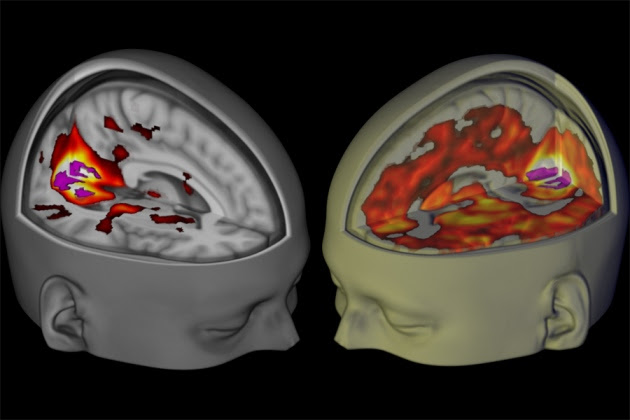 Imperial College London
These are apparently the first images showing the effects of LSD on the human brain. On the right, the brain's visual cortex has dramatically increased its connectivity with other regions of the brain under LSD's influence; in striking contrast the image (left) shows the limited effect on the human who has taken a placebo.

These studies, which are aimed at discovering how LSD produces its hallucinogenic effects, are being carried out by a team at  Imperial College in London. One of its leaders is David Nutt - a neuropsychophramacologist - who has also researched the effects of psilocybin , the hallucinogenic ingredient of magic mushrooms.

An interesting interview with David Nutt by Zoe Cormier, was published with these images in the journal Nature: http://www.nature.com/news/brain-scans-reveal-how-lsd-affects-consciousness-1.19727

Here are some brief extracts:


'We ultimately would also like to see LSD deployed as a therapeutic tool. The idea has old roots. In the 1950s and 1960s, thousands of people took LSD for alcoholism; in 2012, a retrospective analysis of some of these studies suggested that it helped to cut down on drinking. Since the 1970s, there have been lots of studies with LSD on animals, but not on the human brain. We need that data to validate the trial of this drug as a potential therapy for addiction or depression.'

'Before the 1960s, LSD was studied for its potential therapeutic uses, as were other hallucinogens. But the drug was heavily restricted in the United Kingdom, the United States and around the world after 1967 — in my view, due to unfounded hysteria over its potential dangers. The restrictions vary worldwide, but in general, countries have insisted that LSD has ‘no medical value’, making it tremendously difficult to work with.'

'We have plans to do separate experiments to look at how LSD can influence creativity, and how the LSD state mimics the dream state.

'More importantly, we have already completed a trial on psilocybin as a therapy for treatment-resistant depression funded by the UK Medical Research Council: not as a daily drug, but in targeted psychotherapeutic sessions.

'Our latest brain-imaging study suggests that LSD has similar effects — suggesting that it could be trialled therapeutically, too.'