Kuhikugu, known to archaeologists as site X11, is the largest pre-Columbian town yet discovered in the Xingu region of the Amazon. It housed 1,000 or more people and served as the hub of a network of smaller towns. Image: Luigi Marini

This post was triggered by seeing a recent BBC documentary called ‘Untouched Amazon’ in the series ‘Unnatural Histories.’. Here is the brief programme summary.

The Amazon rainforest is the epitome of a last great wilderness under threat from modern man. It has become an international cause celebre for environmentalists as powerful agricultural and industrial interests bent on felling trees encroach ever deeper into virgin forest. But the latest evidence suggests that the Amazon is not what it seems.

As more trees are felled, the story of a far less natural Amazon is revealed - enormous manmade structures, even cities, hidden for centuries under what was believed to be untouched forest. All the time archaeologists are discovering ancient, highly fertile soils that can only have been produced by sophisticated agriculture far and wide across the Amazon basin. This startling evidence sheds new light on long-dismissed accounts from the very first conquistadors of an Amazon teeming with people and threatens to turn our whole notion of wilderness on its head. And if even the Amazon turns out to be unnatural, what then for the future of wilderness?

A summary of some of the major findings are documented in this map below.

Footprints in the Forest

Archaeologists say they have found evidence across the Amazon of centuries-old civilizations that were much larger and more advanced than previous theories suggest. 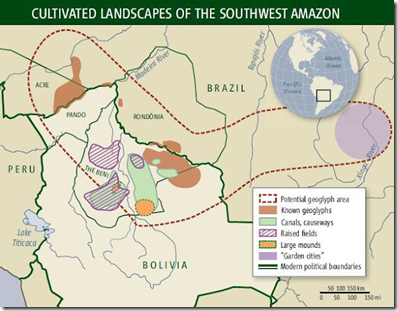 These maps, accompanied by a string of great images and informative extracts from recent books on the subject can be found in this excellent post ‘Written on Land’ on the Crytoforestry website.

One of the most striking discoveries are the geoglyphs in Rondonia – huge earthworks which have been revealed through deforestation. You can see a Google Earth map of some of the discoveries up to 2010. According to a Treenhugger article of the same year some 300 of these have been discovered since the 1970s in the Brazilian Amazon. The rate of discovery has increased since scientists began using Google Earth. 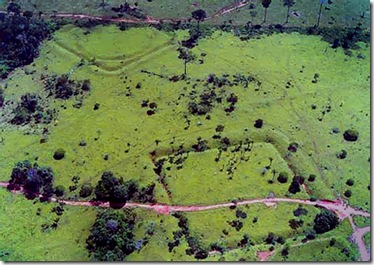 Mysterious in origin, these earth carvings are thought to be around 700 years old. Photo via Apolo11 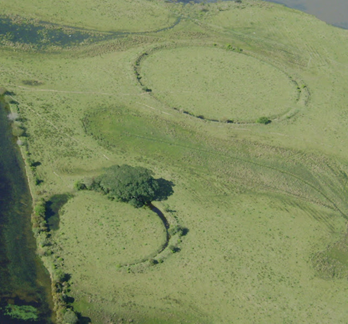 According to an article in a Nano Patents and Innovations blog (strange!) the geoglyphs:

‘…haven't been precisely dated, but could be up to 2,000 years old. Spanning a distance of 155 miles, the earthworks are the remains of roads, bridges and squares that formed the basis for a lost civilization - the vestiges of a sophisticated pre-Columbian monument-building society.
The geoglyphs represent enormous structures, with diameters ranging from 100 to 300 meters, connected by straight orthogonal roads. They are strategically located on plateaux tops above the river valleys. Their builders took advantage of the natural topography in order to construct spaces that were full of symbolic meaning. They were probably villages and ceremonial centres, indicating a society of a complex nature that allowed organization, planning, and large labor force. This suggests a substantial population was living in an area long believed to be too harsh to sustain permanent settlements.

Controversy has reigned for years about the antiquity of an early human presence in Brazil. Work under the supervision of Niéde Guidon and the Fundação Museu do Homen Americano suggests that humankind was present in Brazil as early as 50,000 years ago, tens of thousands of years before humans were thought to have migrated into the Americas.’

Check out also this excellent posting by J.G. Jacobs which includes five Brazilian videos on the topic.

Another great article on the blog Archaeology News Network

Alceu Ranzi, a geographer and paleontologist with the Federal University in the Brazilian state of Acre, has been leading the search for the geoglyphs:

Ranzi said the size and breadth of the discovery reveals that, some 1,000 years ago, the region was home to a large, complex society. The find has expanded a rapidly growing body of archaeological evidence suggesting that the Amazon — once thought to be largely wild in antiquity — was home to civilizations that may have rivaled those of the ancient West.

“It could be something as important as an unknown Roman empire, or a Mesopotamia,” Ranzi said. “It was completely covered by the forest for six or 10 centuries and now is reappearing.”

in the 1990s, scientists began documenting sites along the southern edge of the Amazon, suggesting that area may have held ancient societies as sophisticated as those of the ancient Western world.

“In many respects they were more complex than classical Greece, or medieval Europe,” said anthropologist Michael Heckenberger, who has spent nearly two decades working near the headwaters of Brazil’s Xingu river, several hundred miles east of Acre.

His team of researchers has described communities housing at least 50,000 people, living in what he’s called garden cities — made up of small and medium residential areas built around central plazas and interconnected by elaborate road systems, aligned with the cardinal directions.

Most recent article I could find was this piece by Simon Romero, which was published in the New York Times in January this year. 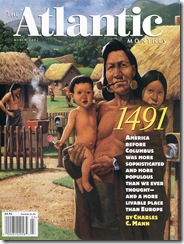 In The Generalist Archive found this article by Charles C. Mann, which I had originally read back in 2002. It broadens the view to the whole of the Americas. Essential reading which will completely change your perspective about the New World that existed before Columbus arrived. Fortunately the piece is still available and can be read on the Atlantic Monthly website