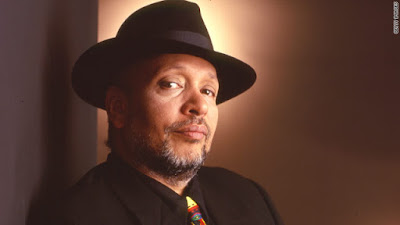 It's always a pleasure to discover an author one has never read before but, in Walter Mosley's case, that pleasure is tinged with embarrassment. As someone who prides himself as having a decent knowledge of American fiction (and a substantial bookshelf of cherished titles) to not know Mosley is almost a crime. Finding nine of his books at my favourite second-hand bookshop at the same time seems almost indecent. Each is inscribed and dated in pen by the previous owner (now deceased) named David (second name hard to read). There may have been others in the same haul I missed. I read them all, one after another, without a break ( or book) in-between. An incredibly enjoyable and stimulating experience. 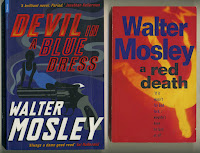 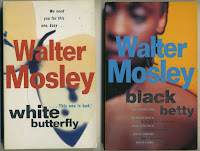 Walter Mosley is one of America's great writers, black and Jewish by birth. His first book was only published in 1990, to be followed by 52 others. He is best known for his masterly crime novels featuring Easy Rawlins and violent sidekick Mouse, mainly set in LA (Mosley's birthplace) between the '40s to '60s. These are on a par with Chandler, Hammett and Elmore Leonard. The stories ebb and flow with effortless ease, the characters and dialogue are full-blooded and authentic. Easy has no official status as a detective but, usually as a favour to a friend, gets down and dirty with a variety of original crime situations. Easy was a black GI in World War II and he often gets flashbacks as he scours the black side of Los Angeles for lost girls, missing money or bad men who need to be taken out. Its hard-boiled, violent and sexy but with a lot of genuine love, friendship and grace.

Mosley wrote 11 Easy adventures, the last being 'Blonde Faith' which ends with Easy driving off a Malibu cliff. Mosley says: "I had no future for Easy, and so I decided I was going to stop writing him. I didn’t think he was really dead, but I did think I was going to stop writing him." Six years later, Mosley was re-inspired to produce two new adventures 'Little Green' and 'Charcoal Joe' with more to come. So far only 'Devil In a Blue Dress' has been filmed, starring Denzel Washington. 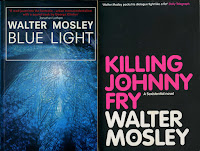 Mosley has also experimented in other areas of fiction. 'Blue Light' wanders into Neil Gaiman territory. Its a weird journey. The cover quote reads: 'A mad jaunt into the fantastic...urban transcendentalism with a sound track by George Clinton.' Narrated by a half-white half-black character called Chance, it's set in San Francisco of the mid-1960s. The blurb reads: 'A cosmic blue light strikes people in its path, quickening their DNA and greatly enhancing their strengths and understanding. They become the Bliues, powerful yet vulnerable.'

Mosley's latest book 'Killing Johnny Fry' is billed as  a Sexistential novel and is definitely not for the prim and proper. It's a powerful and dramatic hardcore sexual journey taking by a man who arrives unexpectedly at his girlfriend's flat to see here being screwed by another man. This tips him off-balance and leads him to engage is a variety of sexual adventures. This is adult literature at its best, The movie comes out next year.

There's much more to be found out about the many accomplishments of Walter Mosley on his
Official website: www.waltermosley.com/
Interesting Wikipedia entry here:
at 1:44 pm