This post is a respectful salute to the late great Alvin Toffler, who we were fortunate enough to meet on several occasions in early 1975, when he was visiting Britain partly to give a lecture at the ICA in London (mid-Feb). The 'we' in this case being myself, Mike Marten and Jon Trux who, along with John Chesterman and others, had produced 'An Index of Possibilities', published in the UK in late 1974 and in the US in 1975.

I have strong but brief memories of meeting AT. He first came to our office at the end of the day in autumn or winter. At the time we were still in full-on freak stage (appearance-wise). Alvin was in a classic belted raincoat, collar turned up. We repaired to a local bar and talked for hours. He was genuinely interested in what we had to say. 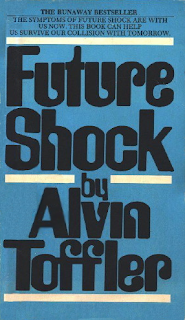 Toffler at that time was the best-known 'futurist' in the world. He and his wife Heidi, had met as radical students. They got married in Cleveland [on the day of my birth!]and both got employment in factories as blue-collar workers for five years.

He is quoted as saying: "My wife and I, unlike many intellectuals, spent five years working on assembly lines. We came to fully understand the criticisms of the industrial age, in which you are an appendage of a machine that sets the pace. "

He then started writing for trade and union papers before becoming a Labour correspondent for the prestigious business magazine Fortune. In 1964, he interviewed the Russian novelist Vladimir Nabokov and the writer Ayn Rand for Playboy,

The trigger for his greatest success was an article for Holiday magazine in 1965. He and Heidi (essentially his un-credited co-writer and researcher) then spent the second half of the 1960s working on what became 'Future Shock'. Published in 1970, the book was a hugely successful worldwide best-seller, based on the 'future shock' concept: when change happens too quickly, it creates social confusion and a breakdown in existing decision-making processes. This resonated strongly in the late '60s. 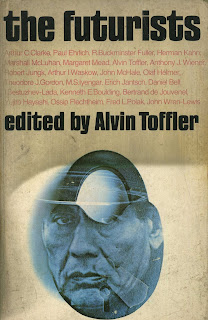 I'm pretty sure that, when we met, he gave us the copy that I still have [now smoke-blackened] of his next book 'The Futurists' - a remarkable anthology of futurist thinking - edited by Alvin and Heidi and published by Ramdom House in 1972, Toffler wrote the book's intro 'Probing Tomorrow'. The line-up of contributors is stellar: Buckminster Fuller, Marshall McLuhan, Margaret Mead, Herman Kahn, Paul Ehrlich, Arthur C. Clarke et al. Futurism had become a movement by this time and this snapshot of key texts provides a valuable overview of the thinking at that period. There are still 'futurists' at work but the term has fallen out of common parlance.

My other personal memory is when we went to the Toffler's London apartment in Culross Street, which runs between Park Lane and Grosvenor Square, site of the US Embassy. Here we met Heidi for the first time and there was another visitor - Mike Oldfield of 'Tubular Bells' fame - who was, I believe, hatching plans for a West End show based on 'Future Shock'.

'The Index of Possibilities' correspondence files contain four letters. Mike Marten sent an interview request on Jan 10th, 1075, received a response from an assistant in New York suggesting he call AT in London on after Feb 19th. The following day MM sent a copy of the Index with a covering letter together with a synopsis for Index Vol 2: Structures & Systems. In terms of the interview, he suggests using 'Future Shock' as a 'departure point and concentrate on your current work. A letter dated May 15th begins: 'Herewith the complete unedited transcript of our interview. So far I've only read it through very quickly...I'd forgotten what a very discursive interview it was.' Unhappily we do not have the original tape or the transcript referred to. 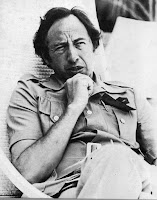 Toffler's next book was 'The Third Wave', published in 1980. If the first and second waves are the agricultural and industrial revolutions, 'the "third wave," a phrase he coined, represents the current information, computer-based revolution. He forecast the spread of the Internet and email, interactive media, cable television, cloning, and other digital advancements. He claimed that one of the side effects of the digital age has been "information overload," another term he coined.' [Wikipedia]

One thing I didn't know was that: 'Toffler was hired by IBM  [in the 1960s?] to conduct research and write a paper on the social and organizational impact of computers, leading to his contact with the earliest computer "gurus" and artificial intelligence researchers and proponents. Xerox invited him to write about its research laboratory and AT&T consulted him for strategic advice. This AT&T work led to a study of telecommunications, which advised its top management for the company to break up more than a decade before the government forced AT&T to break up.' [Wikipedia]

For obvious reason, I was pleased find a passage I'd underlined in pencil many years ago in 'The Third Wave' regarding Toffler's view on generalists. He writes:

'Second Wave civilisations placed an extremely heavy emphasis on our ability to dismantle problems into their components; it rewarded us less often for the ability to put the pieces back together again. Most people are culturally more skilled as analysts than synthesists. This is one reason why our images of the future (and of ourselves in that future) are so fragmentary, haphazard - and wrong. Our job here will be to think like generalists, not specialists.

Today I believe we stand on the edge of a new age of synthesis. In all intellectual fields, from the hard sciences to sociology, psychology and economics - especially economics - we are likely to see a return to large-scale thinking, to general theory, to the putting of the pieces back together again.'

'Today, it is almost a commonplace that technology is transforming the world, and that many of us are struggling to cope. But Alvin Toffler... was the first to take that idea into the mainstream in his book Future Shock (1970), which blamed society’s ills on the “dizzying disorientation brought on by the premature arrival of the future”.

'It is easy to pick out Toffler’s misses...but far more impressive was how much he got right. He was among the first to predict the demise of the nuclear family; the acceptance of gay marriage; the death of the job for life; the rise of the rental economy; that we would come to suffer from too much choice rather than too little.

'Above all, he got his biggest call right: that an industrial economy based on things was being replaced by a “post-industrial” one based on ideas, and that this process would result in wrenching economic and social change.

'Toffler helped to foster the belief within Silicon Valley and elsewhere that the function of technology firms was not just to make money, but to change the world. He also pioneered the idea of the writer as public intellectual ,

'While Toffler Associates, the consultancy firm which the couple co-founded in 1996, enjoyed a steady stream of business, .. because the future he forecast had already arrived. But he was feted in Japan, Singapore, South Korea, and China, where The Third Wave was reportedly outsold only by Deng Xiaoping’s collected speeches. The Communist party even named him as one of the 50 foreigners who had done most to affect China’s development. Other fans include Hugo Chávez, Indira Gandhi and Mikhail Gorbachev.

'In the book, in which he synthesised disparate facts from every corner of the globe, he concluded that the convergence of science, capital and communications was producing such swift change that it was creating an entirely new kind of society.

'His predictions about the consequences to culture, the family, government and the economy were remarkably accurate. He foresaw the development of cloning, the popularity and influence of personal computers and the invention of the internet, cable television and telecommuting.

“The roaring current of change,” he said, was producing visible and measurable effects in individuals that fractured marriages, overwhelmed families and caused “confusional breakdowns” manifested in rising crime, drug use and social alienation. He saw these phenomena as very human psychological responses to disorientation and proposed that they were challenging the very structures of communities, institutions and nations.

'He was among the first authors to recognize that knowledge, not labor and raw materials, would become the most important economic resource of advanced societies.

'Prime Minister Zhao Ziyang of China convened conferences to discuss “The Third Wave” in the early 1980s, and in 1985 the book was the No. 2 best seller in China. Only the speeches of the Chinese leader Deng Xiaoping sold more copies.'

BLOOMBERG/ David Henry
“Where an earlier generation of Chinese, Korean, and Vietnamese revolutionaries wanted to re-enact the Paris Commune as imagined by Karl Marx, their post-revolutionary successors now want to re-enact Silicon Valley as imagined by Alvin Toffler,” Alexander Woodside wrote in a 1998 essay in Daedalus, a journal published by the American Academy of Arts & Sciences.


Alvin Toffler: What he got right - and wrong


The Muddled Legacy of Alvin Toffler

He was right about “future shock” but wrong about the solution. 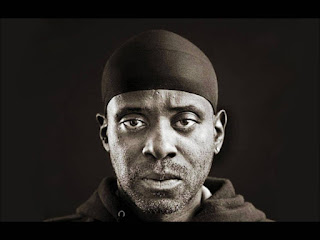 Techno music pioneer Juan Atkins, founder of the pioneering Detroit techno label Metroplex which celebrated its 25th anniversary in 2010, told The Guardian reporter Ben Ferguson how in 1985 he met up with:

Rik Davis, a Vietnam veteran who developed an interest in electronic music while in the army. They shared sounds with each other and soon became bandmates in the group Cybotron.


"There was definitely something that made us click," recalls Atkins. "We talked lots about Alvin Toffler's idea of the 'third wave' and developed what you might call a techno-speak dictionary. In this dictionary were a lot of words like metroplex and cybotron. That's where these names came from. Metroplex is short for 'metrocomplex', which was a future word that Toffler mentioned. It referred to his scenarios in Future Shock and Third Wave where cities over the world would grow so big that they would all become one. This was a metrocomplex." 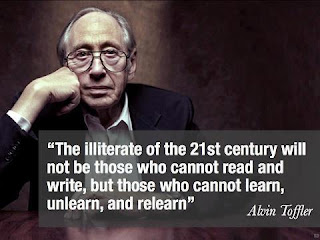