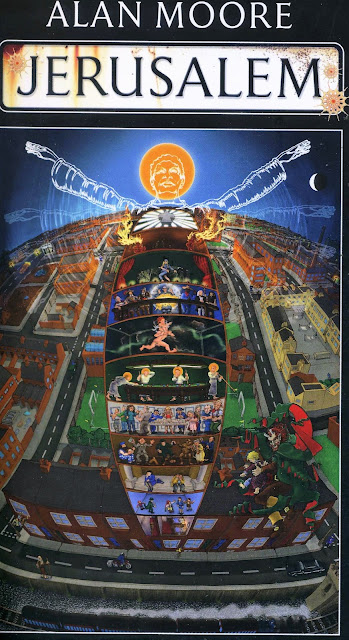 It is THE GENERALIST'S great privilege to be one of the early readers of Alan Moore's epic new work 'Jerusalem', all 1,184 pages of it, to be published by Knockabout Comics on September 13th, in both hardback and a three-volume paperback set in a slipcase,

Also a letter from Joshua Chamberlain from Naseby Church of England Primary School: "All in all, you are the best writer in human history. Please write back."

The press release reads as follows:

'In the half a square mile of decay and demolition that was England's Saxon capital, eternity is loitering between the firetrap tower blocks.Fiends last mentioned in the Book of Tobit wait in urine-scented stairwells, the delinquent spectres of unlucky children undermine a century with tunnels, and in upstairs parlours, labourers with golden blood reduce fate to a snooker tournament.


'An opulent mythology for those without a pot to piss in, through the labyrinthine streets and pages of Jersualem tread ghosts that sing of wealth and poverty; of Africa, and hymns, and our threadbare millennium. They discuss English as visionary language from John Bunyan to James Joyce, hold forth on the illuaion of mortality post-Einstein and insist upon the meanest slum as Blake's eternal holy city. Fierce in its imaginings and stupefying in its scope. this is the tale of everything, told from a vanished gutter.'


Now comes the most difficult part: my own views and comments:

I have been living with Jerusalem for what must be a couple of months now. It's a universe of a book with many, many dimensions of space and time but it's rooted in Northampton, the Saxon capital, the centre of England, the hub of Alan's imaginative and magical world. Magic is an important word to remember when experiencing this book. I suspect that the whole thing may be some kind of spell, designed to destroy our so-called rational cardboard box four-square view of things and replace it with golden beams of enlightenment thinking.

For the first few days I devoted myself to it, night and day, reading until my eyes were strained. I wandered the streets, the time trails, the ley lines of Northampton and surrounds, past and present,and followed the characters as they wandered into and past each other, looping trails and stories overlapping, drifting from scuzzy muck shit to jewels of wondrous unknowingness. There are no 'chavs' in this book; only fully-realised suffering souls, their gritty births, deaths, vomit, spit and degradation running longside and inhabiting a once grand city now Detroited into a falling apartness.

As I progressed, a kaleidoscope of feelings and ideas and connections flittered through my mind. The prose is condensed with detail. I felt was reading by the seat of my pants, flying over and through Alan's brain as he once more picked up his quill pen and began scratching, scratching...into the night, fuelled by his strange imaginings.

The book has many levels and is like the city itself, full of alleyways and doorways, trapdoors and unexpected developments. I kept grabbing onto understanding but in the end it was just easier to go with the flow and let the waves of words wash over me.

I reached a point more than 700 pages where I felt I just couldn't go on when the book spoke to me:

'I know I am a text. I know that you are reading me. This is the biggest difference that there is  between us:you do not know that you are a text. You don't know that your reading yourself. What you believe to be the self-determined life that you are passing through is actually a book already written that you have become absorbed in, and not for the first time. When this current reading is concluded, when the coffin lid rear cover is eventually shut tight, then you immediately forget you've already struggled through it and you pick it up again, perhaps attracted by the striking and heroic picture of yourself that's there on the dust jacket.'

Jerusalem bears some comparisons and DNA linkages with 'Ulysses', with Roberto Bolano's '2666', John Cowper Powys' 'A Glastonbury Romance'. William Blake, Wat Tyler, Austin Osman Spare, Samuel Beckett and Coleridge rub shoulders in the urinal. Like some vast tapestry or medieval map, woven or drawn by some pagan god out of his head on fly agaric, one can only take deep draughts and sit back reeling as unkempt thoughts whirl through one's sensory apparatus.

Better minds that mine will no doubt be able to communicate a much more deciphered view of this marvellous monstrous mountain of imaginings, like the wonderful French woman in the Extras section on my DVD copy of 'Last Year In Marienbad.'

The cover, drawn by Alan and coloured in by his neighbour and colleague Joe Brown, encompasses it all. Its as if the Angel of the North had been melded with Buddhist temple paintings and a 3-D tourist map of the planet that is Northampton.

People get ready. Moore has laid his biggest egg yet. What happens when it hatches out in a million minds is anybody's guess.

September 20th:  In conversation with Robin Ince @ Waterstones in Islington.

November 7th: Piccadilly Theatre for a Guardian podcast in conversation with Stewart Lee.

Great review. I may be reading this too literally, but are Blake and Spare mentioned in the book, or are they simply points of comparison for you?