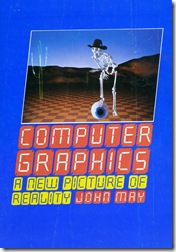 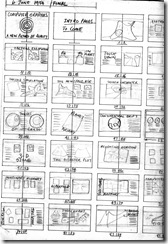 Researching and producing such a book at that time was a more formidable task than now. No computers, no internet, no fax – only the post and the phone. The whole book was elaborately storyboarded in pencil. [Click (left) to see detail]

Those were early days to be producing such a book. Computer graphics were in their infancy compared to their ubiquitous presence today in all forms of media, science, business, defence and many other fields.

The images I was collecting together then were primitive by today’s standards. Now they look intriguing and have a great deal of interest and charm.

I corresponded with places like the Lawrence Livermore Laboratory, the University of Utah, numerous corporations, institutes and individuals. Tronhad recently come out and I interviewed Judson Rosebush, one of the co-founders of Digital Effects, the first commercial computer graphics company in New York, who had done the titles and animated BIT for the film. Also John Halas, the veteran animator who had, at the time, recently completed his first computer-assisted animated film. The intro for the book ran like this:

COMPUTER GRAPHICS
is an account of a voyage of discovery to a world where the real and the unreal meet, where words run out and pictures begin, a place where the only limitation is your imagination.
COMPUTER GRAPHICS
is about a new pictorial lan­guage which we can use to simulate reality with stunning exactness or create imaginary landscapes. Visual represent­ations of mathematical formu­lations they provide a window into the world of the comp­uter.. Like Cubism and the camera, they provide the eye and,brain with a whole new way of looking at the world and will have equally radical implications.
COMPUTER GRAPHICS
will take you on a journey to the electronic battlefield, on a trip beyond the rings of Saturn, to visit the last great airport in the world, inside a virus, across the largest single-span bridge, to the Hall of Scientific Art and the Factory of the Future and beyond...into the 4th Dimension.
Popular in style, pictorial, fast-paced-this is a new kind of book on computers which. is not for the experts but for the ET/Star Wars generations, the new electronic culture. Above all for the broad, general readership who realise that a base understanding of comp­uters is essential in the modern world.
This is a book for people who are interested in the future. 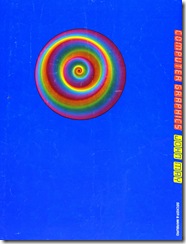 [Back cover image: Los Alamos Scientific Laboratory. Caption from their booklet reads: ‘A computer graphics color system that gives an easily specified range of colors is available to users of LASL’s Central Computing Facility. The pattern was generated while experimenting with color variations on circles of varying sizes and positions.’
Not exactly a high school textbook! Here are a few images and original copy from the book which I hope you enjoy. 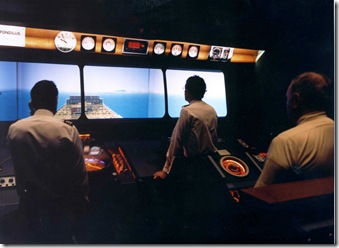 Pictured is CASSIM (the Cardiff ship simulator at the University of Wales Institute of Science and Technology), the only computer-generated imagery simulator of its kind to be equally committed to both training and research. It contains mathematical models of eight ship types, ranging from a general cargo vessel of 18,000 tonnes displacement to a loaded VLCC (very large cruise carrier). New scenarios and backgrounds are continually being added and updated and new scenarios introduced. Helicopters, ferries and lighthouses are just some of the extraneous detail available. 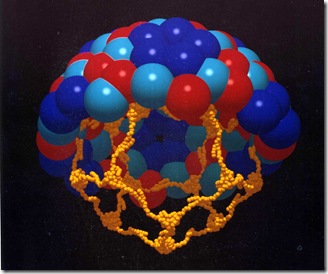 Like some strange species of jellyfish or an interstellar craft, this is a computer image showing structural details of the tomato bushy stunt virus.
What you are looking bat is a hemisphere of 90 of the 180 amino acid subunits that go to make up the protein coat. The subunits – atoms of oxygen (red), carbon (dark blue) and nitrogen (light blue) -  are in turn made up of hundreds of chemically identical amino acid chains. One such chain is shown in yellow, each of its spheres representing a single amino acid. These chains link the virus together.
To produce such an image requires a powerful computer and complex software. The program is called ATOMILL, a sophisticated development of the ATOMS program developed by Bell Laboratories. It contains a hidden-surface algorithm which compute what surfaces fo which spheres will not be visible to the observer as the image moves and the spheres overlap. These are then deleted.
These calculations were done on a CDC 7600. Colour shading and highlights were calculated n a Sperry-Univac V75 minicomputer and plotted on a Diocomed D48 colour film recorder. 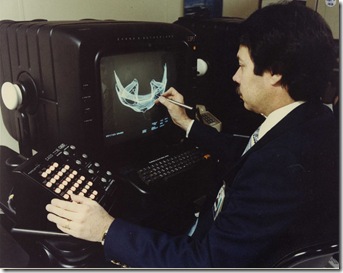 At the Washington University Medical Center in St Louis, a surgeon and a radiologist with experience of computer graphics combined forces to tackle the problem of converting CT brain slices into a 3-D image. They linked up with a computer graphics system at nearby McDonnell Douglas, used by the company for designing aircraft, and were able to generate a three-dimensional contour map of the skull. The McDonnell computer was linked directly to an NC milling machine that manufactured a model skull out of aluminium sheets. 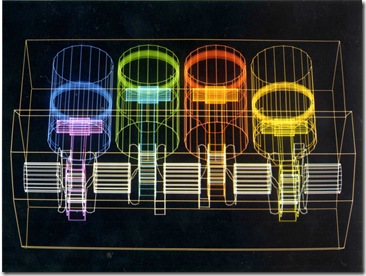 A CAD visualisation of one stage of the cycle of operation of a four-stroke engine. 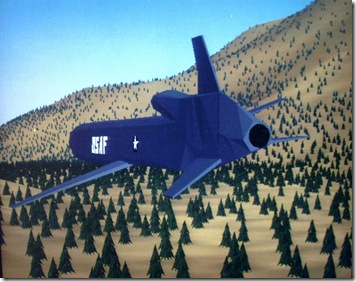 
A computer simulation of an air-launched Cruise missile. This scene, showing depth, colour and realistic detail was created entirely on a VAX 11/780 computer.