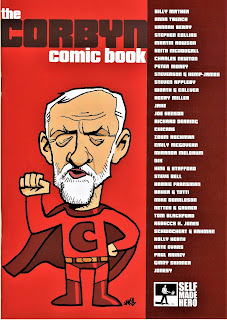 Pleased to receive for review the latest crop of titles from SelfMadeHero [their 10th Anniversary year] which, as usual, cover a very wide field and demonstrate the wonderful richness and variety of the world of graphic publishing.

Published to coincide with this year's Labour Party conference in Brighton, 'The Corbyn Comic Book' is an anthology of 34 contributions by cartoonists, artists and writers from the UK, US and Australia. They include well-known cartoonists and established graphic novelists, a crop of young upstarts alongside a number of illustrators whose work has never before been published.

As you would expect, many of these contributions picture JC as a heroic figure thwarting the evil forces of Conservatism and Capitalism. Many express the passionate expectations and hopes that he has stimulated for an administration that is more in touch with people on the street. There's a lot of dark humour here reflecting the mood of the moment as well as contrbutions that pick up on Corbyn's well-known predilection for working on his allotment and making jam - the latter beautifully written and illustrated by Richard Dearing. There's a touch of Buddhism to this which I like. 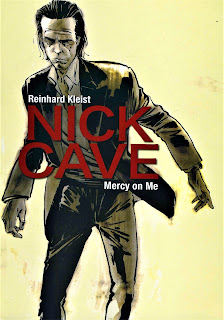 Reinhard Kleist is an internationally feted illustrator with a string of graphic biographies to his credit that have earnt him some of the biggest awards in the Comic world. Perhaps best known to many is his wonderful portrait of the life of Johnny Cash entitled 'I See The Darkness'. From the Man In Black to Nick Cave is in many ways a natural step as blackness is a colour best suited to the character and work, both musical and literary, of his rangy anger-filled persona. Kleist does use colour in some of his work but this 300p+ biographic stunner is pure black and white used to startling effect. It's a masterclass which is worth detailed study. 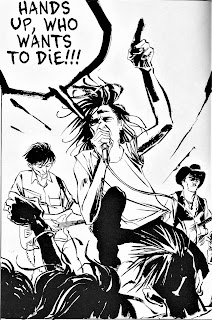 The book cleverly interweaves episodes from Cave's actual factual life story with the strange and fantastical worlds he conjures up in his songs. Rock's Prince of Darkness, Cave's band The Birthday Party earnt a reputation for their violent on-stage performances. After the band broke up in 1983, Cave formed a band named Bad Seeds who have released 16 albums of original songs to date. In 2006, he also started a garage rock band named Grinderman with two albums so far to its credit. Cave's other outpourings include two novels and a roster of highly regarded film scores.

Kleist the perfect artist to document such an extraordinary life.The sheer amount of detailed work in this book is stunning. particularly his visualisations of the live gigs in which he captures the speed, action and emotion in powerful, energetic frames. Nick Cave himself approves. In a cover quote he says:

'Reinhard Kleist, master graphic novelist and myth-maker has - yet again - blown apart the conventions of the graphic novel by concocting a terrifying conflation of Cave songs, biographical half-truths and complete fabulations and creating a complex, chilling and completely bizarre journey into Cave World. Closer to the truth than any biography, that's for sure. But for the record, I never killed Elisa Day.' 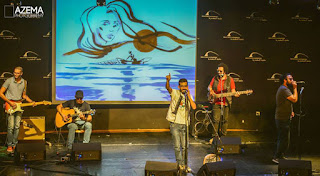 Check out Kleist's website which includes something I've never seen before - pics from gigs where a band plays and Kleist does live drawing projected on a screen behind the group. Great idea.
* 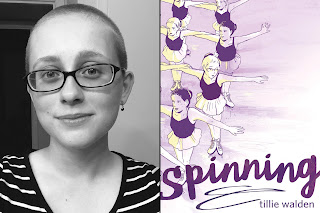 Tillie Walden is just 21 years old and this is already her fourth graphic novel. A twin, born in Austin, Texas in 1996, her extraordinary natural talent flows out of her pen as you can see on her beautiful website. Tillie went to the Centre for Cartoon Studies in Vermont to develop her craft but she told Paul Gravett in an interview here  that it was her father who first lit the spark:

“When I was a kid,my dad got me one of those huge collections of Winsor McCay’s Little Nemo in Slumberland [1905–26]. It was so big (and I was so little) that I could sit on top of the pages." and read the comics.” 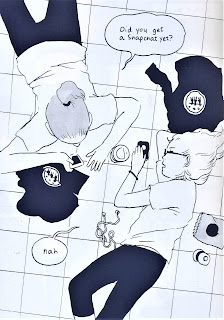 This new whopping 400+page book is a departure for her as its autobiographical. For twelve years figure and sychronised skating was Tillie Walden's life and 'Spinning' is built on her own experiences.

In the author's note at the back of the book, she explains that she didn't want to collect memorabilia and try and tie all the facts down accurately. She wanted the whole thing to come only from her own memories even if they were not entirely accurate. She says she was trying to capture the feeling:  'I care about how it felt to be there, how it felt to win'. 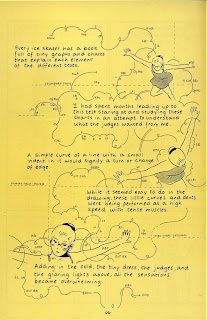 She says that in the end she realised it was not only about ice skating as there were lots of other narratives to do with things in her life that influenced her skating which included her sexuality - she is a prominent LGBT figure in the US.

The whole work is realised in a kind of purple ink with the occasional effective highlight in a subtle yellow. Even if it's not your world, the story is touching and affective and emotionally honest. It's a mature work about a confusing adolescence, Walden demonstrates once more her remarkable facility. A stunning career lies ahead.