THE BRITISH UNDERGROUND PRESS OF THE SIXTIES: EXCLUSIVE 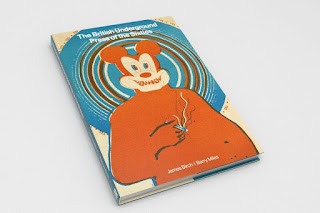 THE GENERALIST is pleased to have the opportunity of writing what is possibly the first review of this book, published by Rocket 88 on October 5th, in a hardback - the Classic Edition (£35) and a limited edition (£250). Am reviewing on the basis of a pdf version as the printed book has not yet arrived.

The book is based on the collection of James Birch, a well-heeled collector with a passion for the underground press and is mainly written by Barry Miles, author of some 50 books, many of them concerning the Beat and Hippy Culture. Miles is well known as one of the founders of International Times and as an expert chronicler, archivist and biographer of key figures in the Beat movement. He was there. For him. this is a well-trodden road.

The first of what came to be known as "underground" papers was the Los Angeles Free Press, launched by Art Kunkin on May Day 1963. Two years later came the Berkeley Barb and the East Village Other. By 1966, when the term "underground press" was coined,  these titles were joined by the San Francisco Oracle, the Fifth Estate from Detroit and The Paper from Lansing, Michigan.
The Underground Press Syndicate (UPS) was formed and it was agreed between them that they would send copies of their papers to each other and that each should be allowed to reprint material from each other's papers for free. [At its height, there must have been more than 100 titles across America].

Meanwhile on this side of the Atlantic, the poetry reading at the Albert Hall in June 1965, which featured Ginsberg, Ferlinghetti and Corso amongst many others, is Miles' marker for the birth of the 'undeground' in England. When 7,00 people turned up, Miles and John "Hoppy" Hopkins realised there was a big audience out there and set a company called Lovebooks that led to the birth of International Times, the history of which Miles covers in great detail.

Next in the book comes the IT comic spin-off Nasty Tales. The underground press was a perfect medium for the new style comic artists, cartoonists and illustrators like Robert Crumb and Gilbert Shelton to name just the best known.. The artists soon realised they could also produce their work in comic book form. Crumb launched Zap Comix  and many other titles followed, being sold and distributed by Rip Off Press in San Francisco.

OZ was launched in the UK in 1967 by Richard Neville and Martin Sharp, who had travelled overland for three months to get to England from Australia, where they'd produced 26 issues of the first OZ and had been charged with obscenity, sentenced to three months imprisonement, nullified on appeal.

The UK edition made 48 issues and closed in November 1973 having survived a major legal action against them over the SchoolKids OZ. Miles doesn't go into the details of this but a recent article by Mick Brown in The Telegraph provides an excellent account based around a long interview with Jim Anderson (the last surviving member of the OZ trio). A section of the book then looks at cOZmic Comics, another spin-off title.

Next comes two niche titles: Gandalf's Garden, the hippiest of mags produced by Murray Muzz from a mystical community centre and shop down in Chelsea's World's End, opposite the hip boutique Granny Takes a Trip; Black Dwarf  was a Marxist broadsheet launched and edited by Tariq Ali in June 1968 when there really was revolution in the air. It lasted until March 1970 when, after an idoelogical split, Tariq and comrades left to form Red Mole.

Friends/Frendz follows on. Launched initially as a UK Rolling Stone spin-off with plush offices in Hanover Squar, funded by money from Mick Jagger, featuring mainly US material with some UK stuff, it was a business arrangement that wasn't going to last. When Jann Wenner insisted that they submit all editorial material and just sell ads, Alan Marcuson left to form Friends, a more radical title, which survived for 28 issues before Marcuson gave up the struggle in May 1971. The new paper Frendz was run by a company called Echidna Epics operating out of 305/307 Portobello Road.

Finally comes Ink an ill-fated adventure to try and run a Village Voice style weekly paper, a plan hatched by Richard Neville and Ed Victor, an Editor at the publishers Jonathan Cape. With a staff of 30 and a former Sunday Times journalist Alex Mitchell as Editor, things looked good, particularly as the Ed promised a massive scoop for the first issue which he only revealed the details of at the last moment. When the paper was printed, they discovered that the non-story had already appeared as a squib in The Times. Mitchell did a runner and was never seen again. The paper managed to survive for 29 issues but failed to catch a major readership and closed in February 1972.

There is a final Appendix with lot of graphics, documents and ephemera from IT and OZ.

So how does it rate? Its great to see all the covers again and I am sure that they will prove incredibly stimulating both to the survivors of that period and to younger generations who I think will be inspired by the cornucopia of inventive styles, imagery, typography and design that are on display. Producing papers at that time was a much more difficult process than it is now, very labout intensive
and demanding. I know. I was there.

I have some caveats which I have shared with Miles, who is a friend of mine - some actual factual points mainly to do with the coverage of Frendz, the paper I worked on in my youth. It has been given short shrift in this account and, in my view, doesn't do justice to what was an important paper at an important time. But I would say that wouldn't I. Here's some notes I scribbled:

Nick Kent wrote his first important pieces for the paper [Bowie/Grateful Dead/Captain Beefheart] and Pennie Smith did some great design before becoming an important rock photographer at the NME. Colin Moorcraft pioneered the British Whole Earth Catalog as a pullout in many issues. Barney Bubbles made a big contribution design wise as did Pearce Marchbank. We were often being raided - bomb squad, drugs squad, Special Patrol Group. The office was a regular pre-gig meeting spot for Hawkwind and Mike Moorcock was a regular visitor wqho was producing 'New Worlds' around the corner. No-one got paid properly. The end came not because the material had moved elsewhere but because we simple ran out of road and money. 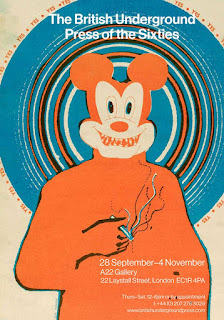 The book will be launched at an exhibition which will be well worth attending. The price of the book may be a barrier to many young people but lets hope the publishers have a cheaper paperback version in mind in due course.

Yoi can order the book here www.rocket88books.com or here www.britishundergroundpress.com

The 'You Say You Want A Revolution?' exhibition at the V&A, the publication of a 50th Anniversary issue of International Times and now this. Is there are new counter-culture on the rise. Methinks so.