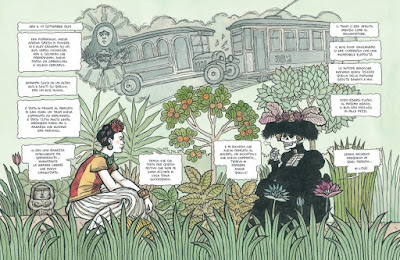 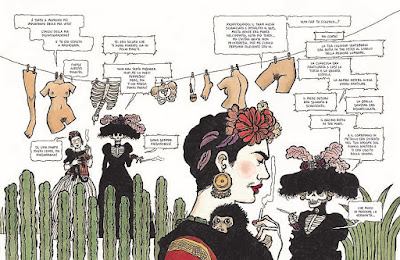 Like many women artists of her time, Frida Kahlo did not consider herself a feminist. Yet in the 60+ years since her death her extraordinary life and remarkable artworks, have earnt her iconic status amongst the sisterhood worldwide.

Her personal image and the images she created have permeated global consciousness. Plays and feature films have been produced about her and a library of biographies and academic works have examined her life and ouevre in complex detail.

This wonderful new graphic biography by Vanna Vinci is a marvellous new addition to the literature. It not only chronicles her life but also finds ways to reach into Kahlo's inner self. These two double-page spreads document the tragic accident that marked a huge rupture in her life, crippling her body and setting the scene for a lifetime of pain.


As these pages show, she is in conversation with death from then on.Vinci pulls no punches. The blood, the sex, the murder, the infidelities are all vividly displayed. Kahlo's remarkable resilience, the power of her spirit are captured in powerful vignettes. The drawings and colouration are beautiful. A triumph. [Published by Prestel] 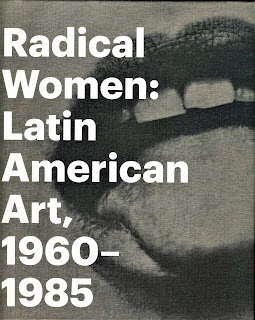 By chance or design, Prestel have published another title - 'Radical Women: Latin American Art: 1960-1985' - which follows on neatly from Frida Kahlo.

A ground-breaking survey of Latin American women artists and Latina and Chicano women artists in the USA, it's a mammoth book linked to a major exhibition that took some seven years to research and stage.

Claiming to be the first genealogy of radical and feminist art in the region, it covers the work of 120 women artists and collectives from 15 countries. Sixteen of the featured artists died during the lengthy reaserch and production process.

The majority of this work has been marginalised and hidden. Most of the artists at the time were unaware of each others' works. Less than 20 women artists from the region are widely recognised in the gallery system and several of those are wives of male artists. In the past Kahlo's work was considered "unhealthy" and her craziness "transmissible".


One of the two curators Cecilia Fajardo-Hill (the other being Andrea Giunta) writes:

'The reality is that many more women artists participated in the shaping of twentieth century art than have been accounted for. In Latin America this has been partly because of sexism and because the system, both on the continent and internationally, judges the quality of  artists' work on the basis of visibility and success,which are often denied to women.'

In the introductory essay, the curators say that most of the work they're presenting is:

'deeply bound to the political situation in much of the continent at the time, particularly in countries ruled by the authoritarian governments that aimed to control behaviour, thought and bodies...The lives and work of these artists are emeshed in the experiences of dictatorship, imprisonment, exile, torture, violence, censorship and repression.' 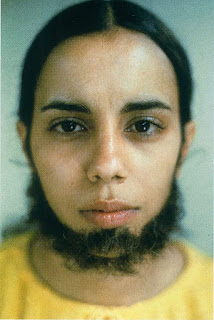 Apart from Mexico (since the late 1970s), no other country in the region had a organised feminist art movement. The curators claim their purpose is to write a new chapter in art history.

A word on the book's structure. Front and back are essays - general comments before, at the back a series of country by country papers by various scholars, with an appendix of detailed artists biographies.

During the 25-year period the book focuses on, the depiction of the female body became the battlefield in these women's commitment  to revolutionary struccle and resistance to the region's dictatorships. In Latin America the relationship between the body and violence was central. Women were being held in detention illegally, or exiled. Their children were stolen. There were specific methods of torture on women's bodies.

In response, these brave artists subverted the portrait, depicted the faces of the "disappeared", made artworks with tortured bodies, works using blood, semen, urine and excrement, portrayed eroticism, sexuality and revolutionary kisses between gays and lesbians.

One of the book's essays is a conversation between three women, practitioners and/or academics, which concludes with a statement that underlines the importance of bringing this work to the attention of the world:


'In the current context of violence against women in Latin America, where, according to the Pan American Health Organization, sexual violence—including human trafficking, domestic and sexual abuse, and femicide—are an everyday reality, we believe that for a work of art to be called feminist it must do more than address the issues that afflict women in patriarchal Latin American societies. Artists must go further and embrace feminist politics. 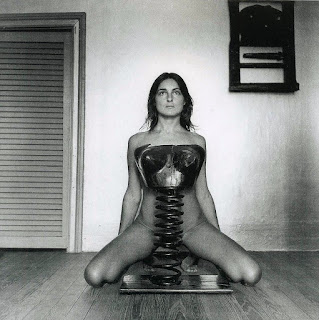 'The act of calling oneself a feminist artist or artivist, as those who came before us did, is extremely significant in today's world, which would like to see us dead or disappeared, enslaved or submissive. The legacies of artists from the 1970s are alive in the present. This is evident in feminist art collectives, in the individual work of many artists, and in feminist art organizations...[there are] more than one hundred artists and artists' groups that make up the Latin American feminist art scene.'

[Above] Untitled work, Part of a series by Liliana Maresca. 1983


This remarkable book, beautifully produced to the highest print quality, is a seminal work. The artworks on display cover a huge range of forms of expression: paintings, prints, performance pieces, photography, video clips, sculptures and beyond. True inspiration for the next wave of female artivists and an object lesson in creativity and bravery.