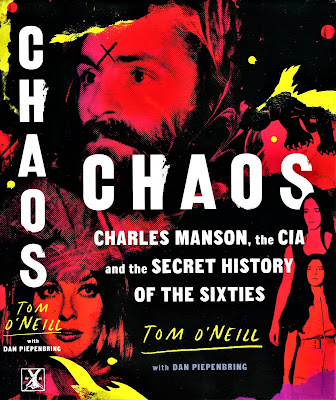 Some 20 years ago, journalist Tom O'Neill was commissioned by Premier magazine to write a piece about Manson's effect on Hollywood. Its taken that long to complete 'Chaos', a lengthy and exhaustive investigation into the little-known background of the Manson murders, just published on the 50th anniversary of an event that symbolically marked the end of the '60s, coinciding with the release of the new Tarantino movie. with its own take on the Manson story.. of which more anon.

When O'Neill first started asking questions, nobody in Hollywood wanted to talk about it and he wondered why. Soon enough he got hooked and ended up digging deeper and deeper. Pictures of the inside of his house reveal acres of files and a whiteboard - almost de riguer in police and crime movies today - with a bewildering maze of lines connecting a huge cast of dodgy ne'er do wells.

He soon discovers that there are gaping holes in the official narratives and that the Manson family set-up with drugs, under-age girls and weaponry seemed immune from prosecution, despite repeated arrests, suggesting that some arm of the law enforcement appartus wanted to keep out them and manson in particular on the loose. there.Competing police forces took four months to arrest Manson and his killer brood yet the authorities knew it was Manson much earlier.

Manson met Beach Boy drummer Dennis Wilson and through him got Melcher to come to the Farm and listen to his songs. Melcher promised a deal but never came through. Seeking vengeance, Manson sent his killing squad out to slaughter who ever they could find in the house. The years that have gone by have not lessened the shock of their savage gory attacks on  Sharon Tate, pregnant at the time, and six other innocents. Two days later, another another two people were stabbed to death on Manson's orders. It is believed that there were other murders that have still not been investigated.

O'Neill races around uncovering many witnesses and important figures that had never spoken to before. Many die before he can reach them. Archives disappear. Promising leads die out. He's refused access to important police files. Despite the difficulties he perseveres.

Until now the standard narrative of the Manson story has been 'Helter Skelter' by Vincent Bugliosi the prosecuting council in the case, now deceased. O'Neill has successfully put the lie to much of Bugliosi's work inside and outside the courtroom. It's a grand and important piece of investigative work which reveals connections to the secret police black ops operations CHAOS and COINTELPRO which were empowered to disrupt not only students fighting against the Vietnam War but also the Black Panthers. There are also connections with the 125 undercover projects funded by the CIA operation named MK-ULTRA  which was about brainwashing using LSD as part of plan to train assassins.

Manson was convicted and died in jail in 2007 but the story of his messianic blood-soaked rampages- enacted by young women out of their heads on LSD - has left a scar in the culture. Manson was much more deeply connected to Hollywood stars and others in the film and music business of the time than was previously believed. O'Neill's delving reveals much that we didn't know but makes it clear that we may never know the full truth. One finishes the book with mixed feelings.

I like the New York Times reviewer's comment that it's ' less a definitive account of the murders than a kaleidoscope swirl of weird discoveries and mind-bending hypotheticals that reads like Raymond Chandler after a tab of windowpane.'