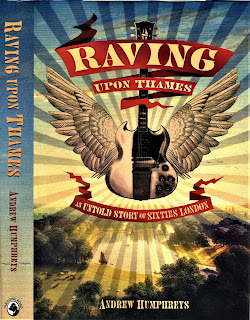 The Generalist has a great interest in the history of British music and a belief that the true story has not been told or not told properly. This why 'Raving Upon Thames' by Andrew Humphreys - a former Time Out editor  - is so valuable and why its garnered 4 stars from Mojo.

Back in May 6th 2016 I published a post entitled on two books: COUNTERCULTURE UK & THE BRITISH BEAT EXPLOSION. The second publication, edited by J.C.Wheatley was subtitled Rock 'n' Roll Island and was focused on Eel Pie Island in the Thames - one of the hotspots of the music scene in Britain from the 1950s onward. A 160pp paperback with lots of photos it was the first proper account of this place that I had read. 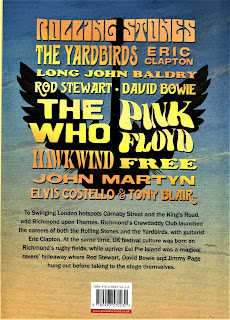 Andrew Humphreys book is twice the size and focuses not only on the Island but the whole scene around Richmond, the Kingston Art School, the early music festivals and the counter culture  of the town and district in exceptional detail. Two maps on the inside covers of the book give a geographical outline. All quotes are carefully sourced and indexed and must represent years of work methinks.

It is well known that Eric Clapton, Jimmy Page, Pete Townshend and Jeff Beck were all living in the district. This area was the training ground for the Rolling Stones and the starting out showcase point for a wide variety of musicians and musical styles, from Blues, R& B, folk, metal, psychedelia and punk rock, It was bohemian quarter of great importance in the development of  British music, comparable to Soho and Liverpool. Wave after wave of successful bands and musicians passed through and enjoyed the coffee shops, record shops and hang-out places of which only some survive today. Its a grand story, well told.

'Raving Upon Thames' has a lot to say about the Yardbirds. In a previous post in April 22nd 2012 THE TOP TOPHAM/JOHN IDAN BAND: THE YARDBIRDS AND BEYOND there is an interview I did with the bands first guitarist Top Topham.

I did take the stage at Eel Pie Island once as a DJ with my brand new copy of Led Zeps first album which had just been released on 31st March 1969. Can't remember the gig.

Andrew is not only the author of the book but is also the publisher as he's set up his own imprint called Paradise Road which aims to publish books about London. Two planned titles are The Marquee Story by Robert Sellers and Nick Pendleton and Denmark Street by Peter Watts. Looking forward to those.