BIT TRAVEL GUIDE: OVERLAND TO INDIA – AND BEYOND…. 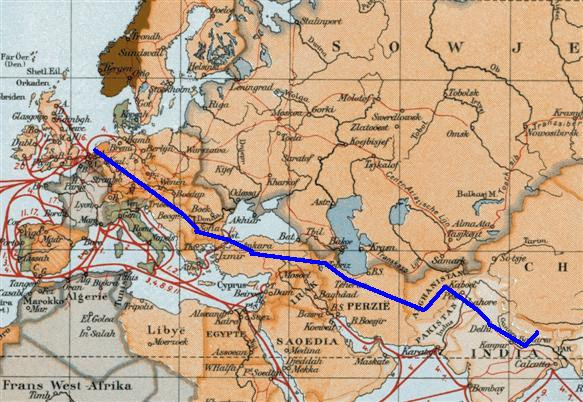 ON THE HIPPIE TRAIL is an excellent site by Hans Roodenberg
Regular readers of THE GENERALIST will know we have been drawing together information on the BIT Travel Guides produced in the 1970s. [See PREVIOUS POSTS below]
We are happy to report that we now have the April 1972 edition of ‘Overland to India – and beyond…’ thanks to Generalist reader Gian Paolo Chiari. Its a 20pp mimeographed and stapled document dated April 1972 which was available at the ‘RIP-OFF PRICE’ of 50p.

According to the intro notes, its a revised version of the 1971 edition compiled by Ian Davison. Here is the opening text:

The European trip is money, work, responsibility, authority and work and anyone who feels these are not worth the hangs involved should be somewhere else.

‘Fortunately there are still places somewhere else, despite European attempts to export their economic development hang-up and the continuing American charade in S.E. Asia.
These places are far easier - and cheaper - to get to than know-nothing travel agents or discouraging consular officials would have people believe and are
well worth any hassle in getting there.
Living is cheap, averaging 50p per day, and
people are friendlier than in Europe; moreover a year in Asia is probably worth
ten years' formal education - if any justification is needed, which it isn't. The hardest part is making the decision to leave - the rest is easy.

A few general points are worth noting. Two is probably the ideal number for travelling; more than two becomes unwieldy. However, travelling alone is no problem as you'll soon meet lots of other people on the road. It's best to have no definite plans or time schedule - just go where you want to go when you want to. Border crossing is easy if you don't look too freaky. Travel as lightly as possible as you'll be adding things to your pack all the way.
Be willing to adjust to local food, customs and conditions. Language is no real problem as you'll soon find ways of non-verbal communication and also pick up basic words of foreign languages. Travel agents are notably ignorant about cheap methods of travel and tend to cater solely for the wealthy tourist. Wherever there are people, there is food, accommodation and transport of some description, no matter how primitive. And the further off the beaten track you go, generally the more interesting the scene is.
These notes cover most of what you need to know to get on the road, but by the time you reach India you'll probably find them superfluous. Don't rely on this information too much - check details for yourself where possible.’

Go from New Cross or New Cross Gate tubes on the Metropolitan line - walk and hitch with a sign saying A2.. .The quickest route is through Belgium, Germany, Austria, Yugoslavia (“don't go the direct way down the middle of Yugoslavia - it is deadly dull and the west coast of Yugoslavia is definitely not to be missed”) and Bulgaria. Alternatively, skip Bulgaria where the authorities can be a bit strange about long hair, and go through Northern Greece to Turkey. Hitching is relatively easy. Youth Hostels provide the cheapest accommodation; where they are not available, use Pensions, or Guest Houses (Gasthaus) rather than hotels, or sleep out in Summer. Most university towns have student hostels. Some non-British nationalities require Yugoslavian visas, but these are easily obtainable at the border. By the way, it might be advisable to forget about drugs altogether in Europe: Greece, for instance, has an automatic two year sentence even for 1 gram of hash.