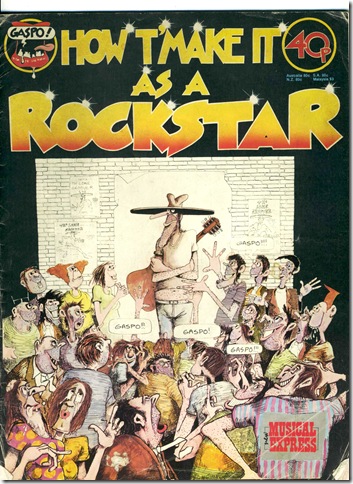 'How T'' Make It As A Rockstar' was published in 1977 by IPC Magazines [now IPC Media]. As well as much Lone Groover material, it contains comics and illustrations by Malcolm Poynter and Ian Miller. Text was  by NME writers Tony Tyler and Chris Salewicz. It was Edited by Zip Lecky with Tony Benyon also credited as Assistant Ed.

While we're on the subject of forgotten artists, let's hear it for Tony Benyon and his inestimable creation 'Th' Lone Groover', which was a staple in the NME during the late 1970's.

Before 'Spinal Tap', the Groover was stumblin' through the music business, puncturing pomposity, falling on his face, desperate to succeed but hating the business, often extracting tragedy from triumph - a survivor.

There's a lot of spleen vented in these strips, which Tony B also aired at regular freeelance drinking sessions in and around Carnaby Street, where we would all regale each other with hard-luck stories of indignities suffered at the hands of editors, commissioners and publishers, art directors. Then came the humour and it was good to laugh about it all. Tony captured a lot of the energy of that time. Hoping you're out there somewhere, mon brave. 'Th' Lone Groover Express' is a 24pp showcase of Tony B's work, with much Lone Groover and other characters and comics besides. Undated. 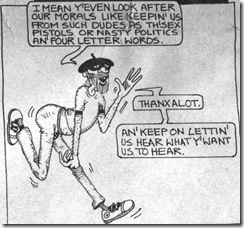 A kind of self-portrait of the artist. Don't remember Tony with a beard but one of his distinctive trademarks was the ever-present beret. 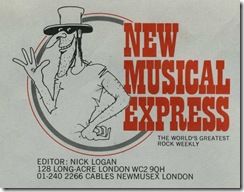 The NME logo, graced by Th' Lone Groover, from a rare sheet of NME notepaper of the time (late 1970s) in The Generalist Archive.  NME logo was subsequently redesigned  by Barney Bubbles (see Previous Post).

THE BEAT GOES ON: Check out the band Erk Alors  on MySpace. They write: 'What in the name of the wee man does Erk Alors mean, for a start? Well, greybeards will remember The Lone Groover strip cartoon in one of the music weeklies, back when they were still newspapers, who was fond of saying “Erk alors!”

The Lone Groover is also name-checked as an influence by Johnny Heartache.

This is an obscure link to a the SA ROCK DIGEST ISSUE #210, which asks the question 'Where is Ronnie Domp?'' The Editor writes: ' Ronnie Domp is the unforgettable South African  version of the "Lone Groover", a very funny and talented folkie from way back, with his trademark flat brimmed black hat. Famous for many great lines including the classic in concert ad lib "this next song is by Bob Dylan whose lyrics are pretty crap but his music's great to dance to!"

John have ked the Benyon piece to our NME page on Facebook hope you don't mind....but the old mare mustn't be forgotten when she had a kick like a mule...

I have just finished permin mi pubes and was lookin through some old programmes and stuff and, erk alors, found my almost pristine copy of Benyons little read book starrin of course our hero the groover, lookin for the meanin of life....any way we could get this copied to the site as a full tribute both to Benyon and the Groover...mi codpiece rat is all for it....

Please check out www.reverbnation/thelonegroover - name appropriated by one man and guitar outfit....a fan of Tony Benyon, gives out copies of original cartoons at gigs whilst doing "his own stuff", hope it's endorsed/taken in spirit meant as name taken in tribute.