STRANGE ATTRACTOR PRESS: OBSOLETE SPELLS and CITY OF THE BEAST/ THE LIVES OF VICTOR NEUBURG AND ALEISTER CROWLEY 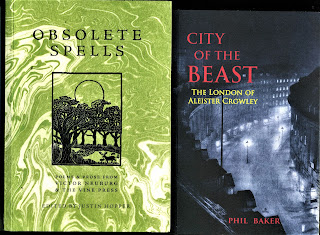 The Strange Attractor Press is an independent publishing house founded in 2003, based in London and run by Mark Pilkington and Jamie Sutcliffe. The Generalist has reviewed a number of their books over the years which are a celebration of unpopular culture as they call it. The books are of high quality and their back catalogue is worth examining. See: http://strangeattractor.co.uk/

Obsolete Spells is for me a book of great importance. I first discovered the poet Victor Neuburg in the 1980s when I returned to live in Steyning in West Sussex where I had been a  boarder at Steyning Grammar in the 1960s. I learnt that the poet Victor Neuburg  had lived just opposite where I went to school. Using a hand cranked printing press The Vine Press published many books of poems and prose 'that reflect his love of local lore and landscapes' writes Richard Mcneff in the Foreword.

Section Two  of the book is a fascinating 35-page turner by Justin Hopper, an American writer who has also published a book on his personal journey through the Sussex downland and its history. He writes:

' Neuburg's adult life can be split into three parts, which (almost) neatly divide by decades into the 10s, 20s and 30s. From his start at Cambridge in 1906 until his recovery from the First World War in 1919, it was Aleister Crowley and his tantalising occult circle that dominated Neuburg's life. It was with Crowley and friends that he began his career as an editor and publisher, working to create The Equinox, modest house organ of Crowley's magical movement. In the 1930s, until his decline and eventual death in 1940, the London poetry world was Neuburg's domain, as he edited first Poet's Corner in  the Sunday Referee, and. afterwards his own arts, politics and poetry newsweekly Comment. But in between the two, as London experienced the roaring twenties and the dawn of the modern world, Neuburg  hunkered down in the sleepy town of Steyning with his own creation The Vine Press.'

A talented poet himself, Victor has always been in the shadow of Crowley and Dylan Thomas (who he discovered). Hopper writes that both men loved him but also held him in utmost contempt. Victor was physically damaged and often beaten by Crowley whilst enacting ancient magical practices,

The bulk of the book is a excellent compilation of sections from Vine Press books he published between 1920 and 1930 with an additional text published after his death. SWIFT WINGS; Songs in Sussex and SONGS OF A SUSSEX TRAMP and THE WAY OF THE SOUTH WIND & TEAMS OF TOMORROW are pure gold for us Sussex folk but there are also many other riches, including, in particular THE STORY OF THE SANCTUARY by Vera Gwendolen Pragnell.

In 1923, she established, on a plot of land at the foot of the South Downs near Storrington in West Sussex, a ' makeshift community of icons and hoboes; communists, proto-fascists and aging anarchists; free thinkers and free lovers'. Arthur Calder-Marshall said: ' was an asylum for almost every kind of refugee, not a workshop for those who found life in the city too distracting'. [Illustration: Eric and Perrcy West, woodcut illustration] 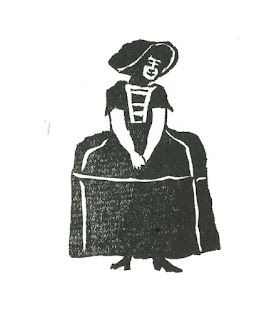 The book's back cover notes are interesting, beginning with 'Victor Neuburg had two claims to fame; he discovered Dylan Thomas and Aleister Crowley once turned him into a camel.'

'As a printer and publisher, Neuburg acted as a conduit for bohemian writers and art luminaries and those dedicated to experimental living.... He was a fixture at his local utopian free-love community, the Sanctuary. Through it all he turned the handle on the Vine Press, publishing books of nature writing and folksong, neo pagan poems and utopian philosophy hymns to Old Gods and paeans to love and wonder.' 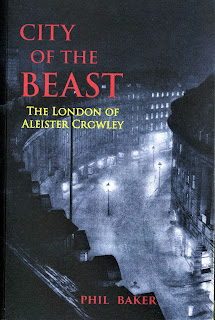 This is not a walking guide which is a relief from the overflow of psychogeographical journeys of that kind. It presents itself as 'a biography of sites (93 locations), revealing a man, an era and a city.

Phil Baker writes; 'I have drawn extensively on Crowley's unpublished diaries, dense with London detail, which give an exceptionally intimate and human pictures of his day-to-day life'

It was here that Crowley joined the Golden Dawn considered  'probably the most influential magical order that has ever been'. W.B. Yeats considered it his church and university.

Crowley was  largely short of money but nevertheless managed to live in the better parts of the city, to dress well and to maintain his drug habits. He writes about his favourite chemist where, before the passing of the Dangerous Drugs Act in 1820, he was able to score heroin, cocaine and cannabis in his search for the Holy Grail of drugs.

He and another were expelled from the Golden Dawn by Yeats. Crowley later wrote 'In 1900, the Order in its existing form came to grief and nobody has ever been able to picked up the pieces.' Baker comments. 'The Glory days of the Golden Dawn were over' Some years later Crowley and two others formed a new occult group known as A.A [Argentaum Astram]. His ceremonial outfit was a cloak embellished with a Rosicrucian cross and the eye of Osiris together with a red hood.

Before that he left London and bought a house by Loch Ness. In Scotland he married Rose Kelly with bad outcomes and they divorced in 1909.

In the intervening period he largely lived abroad, travelling around the world, visiting Mexico via New York, Ceylon, Burma, India, Vietnam, Hong Kong, China, Japan, and Tangier. Mountaineering was one of his other hobbies.

This restlessness permeated Crowley's life and the book is a dizzy and fast-moving account of his constant perambulations and his extraordinary appetites - for food, for women and for the dark occult world which he wrote about extensively. For those who you who read Dennis Wheatley's The Devil Rides Out - which was the greatest popular occult novel of the 20th century - it's not surprising that Crowley was the model for the main character.

In reference to the diaries Baker writes:  'In a world of trigger warnings I should add they have something to offend everyone, even to appal, and that I don't intend to labour this aspect.' He remained defiantly transgressive and deliberately provocative throughout his life.

He also consulted the I Ching every day.

One of his favourite hangouts was the Café Royal which he attended from 1897 to 1940 rubbing shoulders with  the likes of Aubrey Beardsley, Oscar Wilde, Walter Sickert, Augustus John, Max Beerbohm and others.

When Wilde died and was buried in Père Lachaise in Paris his tomb was covered with a monumental naked winged angel figure by the American sculptor Jacob Epstein which featured unusually large testicles. The Parisian authorities considered it indecent and  covered the genitals with plaster. Epstein was told he must either castrate it or fig leaf the genitals. Epstein's response was to hack off the plaster. On his return to Paris to complete his  work he found the statue was covered with tarpaulin and guarded by gendarmes. Regular protests were made by groups of artists until finally it was agreed that a bronze plaque made in the shape of a butterfly should be affixed to cover the offending portion of the statue.

In early August 1914 the statue was finally unveiled in a ceremony led by Crowley which Epstein refused to attend.  Crowley in front of a crowd of twenty people recruited from the Left Bank, uncovered the statue with their help and hacked off the plaque.

A few weeks later the sculptor was the sitting in the Café Royal when Crowley walked up to him and told him his work was now as he conceived it. Around his neck was the bronze butterfly plaque on a very long cord.

[More detail is provided in 'An Angel For A Martyr' By Michael Pennington (1987). This statue means a lot to me as I went to see it in Père Lachaise one Sunday afternoon on my birthday in April 1995 and sat there alone drawing the statue's headdress. 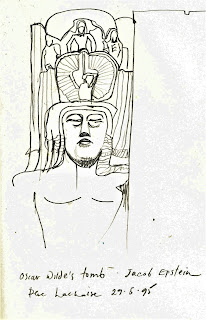 The Afterword to the book raises a very interesting comparison story. Phil Baker writes:
'Crowley's affinity with the culture of the 1890s was more obvious in his lifetime... Remembered as the time of Aubrey Beardsley, absinthe, The Yellow Book and the Café Royal, the Nineties were as significant in their way as the 1960s, a decade they prefigure with their sense of 'liberation', more open sexuality, critical social thinking drug use and an occult revival. London was central to both decades.'
A fascinating book packed with much more than I have highlighted here. There are extensive notes and source material which makes it a valuable book to enable further exploration,