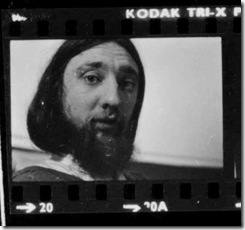 [Left]: A long-lost image of Barney from a scrap of contact sheet I found in the Frendz archive. taken at the magazine's office at 305 Portobello Road. [Date and photographer unknown]

Back in November, The Generalist reported on the launch of 'Reasons To Be Cheerful: The Life and Work of Barney Bubbles' by Paul Gorman. See: BARNEY BUBBLES BOOK LAUNCH EXCLUSIVE The book provides the best overview of Barney's graphic work from the 1960s onwards until his death in 1983.

This is a very good piece in the New York Times about the book, which includes a slideshow of Barney's work. See: 'Judging An Artist By His Elusive Covers' by Alice Rawsthorn.

The rediscovery of his work has been a long process. For almost a decade his name was forgotten. As much of his work was unsigned or credited using pseudonyms, his huge creative achievement was obscured.

Then in Spring 1992, Eye magazine published a 12pp-piece entitled In Search of Barney Bubbles, featuring an essay by Jane Thrift and showcasing a collection of his work. You can now see and read the whole feature online. Eye have also carried two recent posts: Reasons To Be Cheerful Part One and Two.

In 1997 came Barney Bubbles: Artist and Designer, an excellent extended post on the fantastic blog Feuillton, - being a journal by artist and designer John Coulthart, cataloguing interests, obsessions and passing enthusiasms.

Two artists Rebecca and Mike had also become interested in Barney's work and their Barney Bubbles Underground
exhibition at Artomatic in London's East End in 2001 is to date the first exhibition of his work ever held.

Virtually the only formal interview Barney ever gave was by Dave Fudger and appeared in The Face [No 19/Nov 1981]. Can't find it online at present. 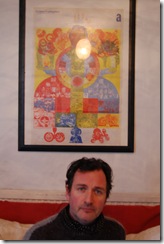 Here is Paul Gorman sitting in front of a framed page from OZ magazine by Barney Bubbles at his house in Clapham where The Generalist went to interview him in January. [To be posted on the Audio Generalist in due course]

Paul has now started a blog on the book. He already has some new material from one of Barney's former girlfriends which you can see there.

See: Reasons To be Cheerful - Art, Design and Rock & Roll

Barney Bubbles? What a laugh.

Barney also has a Wikipedia entry

Now there is to be tribute concert at the Roundhouse in Barney's memory. Support it if you can.

Note: This gig has been postponed and is now to be held on June 7th 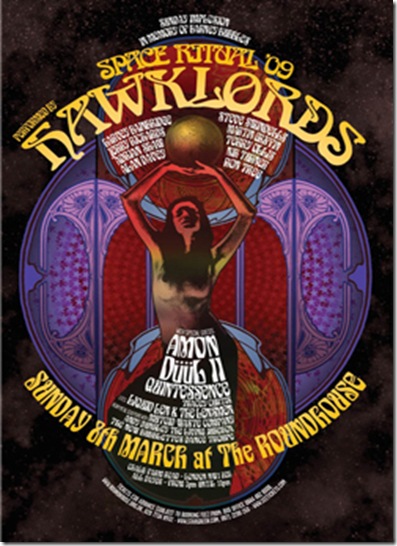 Other music will be provided by an incredibly rare performances from Quintessence and Amon Duul II and a set from the quite fantastic Tracey Curtis as well as ‘Mothership Control’ from DJ Andy Dunkley (The Living Jukebox), otherworld gyrations from the gorgeous New Bubblettes, lighting by the ever-amazing Liquid Len and The Lensmen, and Mutoid Waste Co.’s weird and wonderful sculptures and happenings.

There will also be a performance of Bob Calvert’s play, 'he Stars That Play With Laughing Sam’s Dice' (the stage set of which was designed by Barney), performed by the Pentameters Theatre Group.

Tickets: £30 in advance (subject to booking fee) from: