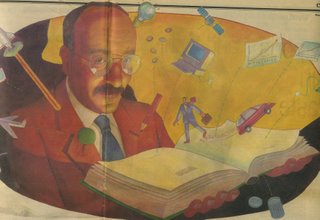 I wrote this timely article for the 'Connected' supplement of The Daily Telegraph, who published it on June 2rd 1997. 'Connected' was the first British newspaper supplement on digital technologies and I was a regular contributor to it. In our modern era of concern over climate change and increased interest in energy efficiency, this article still makes interesting reading.

Digital Weapons Deployed In War On Waste
Here are some disturbing facts about the world: we are more than 10 times better at wasting resources than using them. Eight per cent of products are discarded after a single use. Ninety-nine per cent of the original materials used in the production of — or contained within — goods in America becomes waste within six weeks of sale.
Seventy per cent of the original fuel energy used by conventional or nuclear power stations is wasted before it gets to an ordinary household light. Similarly, 85 percent of the energy from a car's fuel is wasted in the engine or drivetrain before it gets to the wheels.

In a steadily warming world, such wastage — of heat, resources, time, money, water and air — is both dangerous economically and a contribution to climate change that we can't afford. Fortunately, a solution is at hand.

A new "industrial revolution" is beginning to emerge alongside the digital one — a revolution of resource efficiencies and environmental technologies. Computer-aided design has radically altered design, engineering and architectural practice; micro-electronics has enabled the increasing sophistication of manufacturing processes; telecommunications affects transport.

This revolution will have an equally important impact on all our lives in the next decade, although evidence of it is, as yet, scattered widely. However, the publicatoions last month of a book called 'Factor Four' will not only provide a focus for broader public awareness, but also introduce to a wider readership in Britain one of this revolution's leading evangelists, Amory Lovins.

Lovins, 49, a consultant physicist by training, is an engaging character whose dry wit is combined with an encyclopedic memory and a snappy line in new thinking that has convinced even the most trenchant of critics.

Just as the 19th century industrial revolution brought a massive increase in the productivity of human labour through mechanisa­tion, so, Lovins argues, this new change will achieve an equally remarkable result through the more effective and efficient use of materials and energy.

'Factor Four' is the latest report from the Club of Rome, which, back in 1972, triggered off plane­tary concerns with its first report, 'Limits to Growth', warning of the ecological constraints on human activity.

"There are some very powerful new technologies for using all resources — energy, water, materi­als, transport services — more pro­ductively," says Lovins. "These are the technologies of elegant fru­gality, for doing more and better with much, much less. They pre­vent depletion at one end and pol­lution at the other, make a profit on both, and usually provide a much superior service as well."

Factor Four is packed with examples that back up his asser­tions:

• One-fifth of all electricity used in America goes directly into light­ing. However, ordinary incandes­cent light bulbs, which have changed only modestly since the Thirties, emit only 10 per cent of their energy as light. These are now slowly being replaced by com­pact fluorescent lamps, pioneered in Holland and Germany. About 200 million of these lamps are sold every year globally, and this is ris­ing by 15 to 20 per cent a year. Those sold in 1994 alone will save around £5 billion in electricity over their lifetimes.

• Lovins was involved in an $18 million, seven-year project to ret­rofit a dozen experimental build­ings, a project underwritten by US Pacific Gas and Electric, the larg­est investor-owned American util­ity company. The project confirmed that about three-quarters of the electricity used in most situations could be saved, while providing the same or better services.

So what value do the 'Factor Four' concept and Lovins' ideas have for British industry?

Peter Scupholme, manager of environmental relations for BP International, says: "People like Lovins are adding to the debate by challenging the existing mindset." BP had Lovins to one of its seminars last year, on the future of transport. Scupholme says BP is striving for a more energy-efficient process at its refineries. However "in real life", he says, things are changing slowly, "but there is a widespread recognition that we need to move towards more sustainable production and consumption patterns. In this debate 'Factor Four' is a good market to aim for."

Dr Chris Tuppen, the corporate environmental issues manager for BT, sees telecommunications as a key part of the shift towards sustainability, and says telecoms has achieved far more than a factor of four in relation to costs and bandwith. The first transmission cable in Britain, which ran from London to Liverpool in 1914, required 80kg opf copper per kilometre of cable for each telephone circuit. Now fibre optic cables use 0.001g of glass per kilometre per circuit.

A telling example of the interac­tion of the digital and the environ­mental is the case of BT's tele­phone exchanges, which have been switched from electro-mechanical to digital.

"The old exchanges use most energy only when they switch," says Tuppen. "The digital exchanges need to be on all the time, which generates heat. Our immediate reaction to this was to install air-conditioning units — increasing energy use. Now all new BT exchanges use forced natural ventilation, elimi­nating the need for refrigeration. This has cut energy use by 50 per cent. We were able to achieve this by using computer modelling of air flows; each exchange is individually modelled for maximum efficiency. We have also broadened the temperature operating range of the exchanges. Computer manufacturers are now coming to us to see if they can do the same thing for computer systems."

Lovins' most recent battle in England has been to try and change the system - established by the restructuring of the electricity industry - that rewards electricity companies for selling more energy and penalises them for cuitting your electricity bill.

"We have changed it in six or eight of the US states so far, and it has a miraculously beneficial effect on utilities' behaviour and culture if you align their share­holders' interests with the custom­ers'. Just now they are opposite," he says.

Lovins resists calling these new technologies "green". They are "simply the way most technol­ogies are going to be. They work better and cost less than, if you like, the 'brown' technologies that were based on a large throughput of resources from depletion to pol­lution while delivering a rather modest amount of an indifferent service.

"Typically, these [new] technol­ogies have a much higher ratio of intelligence to mass than the old ones. There is not much to them materially — just enough to do the job; but a great deal of intelli­gence, and indeed wisdom, in the design."

If one idea can be said to symbol­ise Lovins's views it is his develop­ment of the hybrid electrically-powered Hypercar. Lovins and his research institute, the Rocky Mountain Institute in Colorado, attempted to re-think the entire concept of the car.

The result was the Hypercar: a lightweight (up to 75 per cent lighter than a conventional car), sleeker (drag reduced by 60 per cent) and more efficient vehicle (road and tyre energy loss slashed by 60 per cent).

It is powered by a hybrid petrol and electric drive, the petrol engine generating the electricity for an electric motor. Petrol stores 100 times the energy per kilogram compared with batteries; such a propulsion system weighs about a quarter as much as a battery-elec­tric car. The Hypercar concept has the backing of the White House, and the big three American car manufacturers.

In Lovins's view, cars had become "incredibly baroque", adding gadget after gadget to solve problems that better design should have prevented in the first place.

"The Hypercar is heading rap­idly to market. We are expecting it late this decade. It does not, of course, solve the problems of too many people driving too many ki­lometres in too many cars, and may make them worse by making driving even cheaper and more attractive. But, I think I would rather run out of roads and patience than out of air and oil first. And we ought not to run out of either because we ought to have real competition among all ways of getting around or not needing to."

BOX: Efficiency of A Genius
Educated at Harvard and Oxford, where he became one of the youngest-ever dons at 21, Lovins also holds six US honorary doctorates and is the author of 22 books and hundreds of scientific papers.

He won a MacArthur "Genius" Fellowship in 1993 and the Onassis Foundation's first Delphi prize — one of the world's two top environmental awards. He was named by the Wall Street Journal as one of the 28 people worldwide "most likely to change the course of business in the Nineties".

He has briefed nine heads of state and given expert testimony in eight countries and more than 20 American states. He has advised companies ranging from BP to Xerox; public-sector clients include 13 state governments and the US Congress.

A key mentor was Dave Brower, founder of Friends of the Earth, in the US, Lovins later helped found the organisation in Britain. He lived here between 1971 and 1981, and wrote the first case study of British National Parks Policy. The book was held up for a year by RTZ, which had planned to mine for copper and dredge for gold in Snowdonia.

Lovins says: "I may have saved RTZ going bust because, just as they would have been at the maximum outstretch of their cash flow, the copper market went south. In the curious way of life's ironies, I'm now working cordially with the Copper Development Association, because almost everything one does to save electricity happens to use more copper."

Much of his work is in collaboration with his wife, Hunter — a lawyer, sociologist, political scientist and forester. Together they founded the Rocky Mountain Institute in 1982, an independent, non-profit policy centre that fosters resource efficiency and global security.

The institute's 40 staff explore the links between energy, water, agriculture, transport, security and development. Its annual budget comes from grants, donations and enterprises, including E Source, a database and news service on advanced electrical efficiency.