PHIL SPECTOR: TEARING DOWN THE WALL OF SOUND 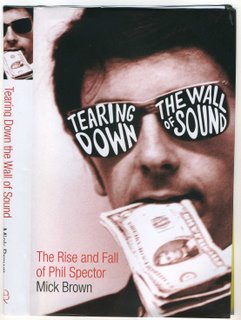 There have been five other biographies of Phil Spector published over the years, (none of which I have read) but I would be surprised if they were able to match this magisterial piece of music journalism.

'Tearing Down the Wall of Sound' developed out of an assignment for The Telegraph's Saturday magazine. Mick had managed to secure the first interview with Spector for an age (and successfully survived the encounter without being threatened or locked in). The same weekend the piece was published in February 2003, Spector was arrested after actress Lana Clarkson was found dead in the hall of Spector's mansion with gunshot wounds. The trial, after much legal prevarication, began on March 19th this year.

The book opens and closes with extracts from Mick’s interview (which can incidentally be heard on The Telegraph website here) together with the latest state of procedural play at time of publication. Expect an update paperback version reporting on the trial and its outcome.

The biggest celebrity trial since pop star Michael Jackson's 2005 acquittal on child molestation charges, it will be shown live on American tv. Spector, now aged 67, is free on $US1 million bail. He denies the charges that he killed Clarkson. He told Esquire magazine in an interview shortly after his arrest that Clarkson "kissed the gun" in a bizarre suicide for reasons he did not understand. Opening statements in the Spector case are likely to begin in late April or early May, with the trial likely to last up to three months. 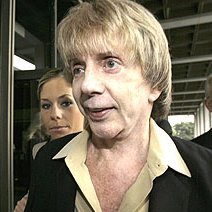 Spector’s is a complicated tale. Needless to say, he came from a disturbed background, had a supernatural genius as a producer, had lots of guns, turned ugly when on pills and alcohol. The talent and the chaos are mixed up together.

The young Spector’s aural vision of the Wall of Sound, created by the Wrecking Crew, an assemblage of top LA session players, in a relatively crummy studio is fascinating and well evoked as are the stories behind ‘You’ve Lost That Loving Feeling’ by the Righteous Brothers and ‘River Deep, Mountain High’ by Ike and Tina Turner. The first has now become the most widely played record ever; the latter was a relative flop in the US charts when first released, which broke Spector’s confidence and stellar run of chart successes.
Spector’s personal life makes for depressing reading. His father had committed suicide during his young life. He was dominated for many year's by his mother and sister and had many disastrous personal relationships. He had a dread of women leaving him, which is why he often locked them in his house against their will.

At the launch of this book which 'The Generalist' attended at Daunt’s bookshop in , Mick said that, strangely, the people who told the nicest stories and said the kindest things about Spector (and there are many in the book) were the ones who were most reluctant to be named.

What did I learn: well for a start, I hadn’t appreciated that Dennis Hopper had planned to make 'The Last Movie' first and had financial backing from Phil Spector before getting into 'Easy Rider' and then making it later and thus effectively ending his career for many years, such was the mayhem it caused.

I hadn’t known that Barney Kessel was the young Spector’s great guitar hero (Spector himself being a bit of child prodigy on the instrument by the age of 12) and actually rose to his defence in Downbeat magazine who hadn’t included him in their Great Guitarist of Jazz poll. Spector’s mother heard that Kessel was recording in LA and arranged for the young Spector to meet him. Kessel took the boy under his wing and taught him the tricks of the trade. Strangely, later in Spector’s life, Kessel’s two sons chaperoned Spector around LA's nightlife for a period; they found Spector's mad and dangerous antics hilariously funny and seemed to have no fear in extreme situations - of which there were many.

I was also unaware of the closeness of the friendship between Spector and Lenny Bruce and interested to read more about his relationship with John Lennon and about his first visit to , when Andrew Loog Oldham followed him round like an acolyte. It was also surprising to read that Brian Wilson often was to be found worshipping the master, overawed, in the control booth during some of Spector's recording sessions.

This is a well written, researched and crafted book which manages a huge array of complex material and multiple narratives successfully and brings us haunting visions of Spector in the studio, in his darkened mansions, in extremis, in a brief period of blissful parenting before his young son was to died of leukaemia.

extensive original research, which gives Mick's Brown book its authority and authenticity, and his readable style that keeps you firmly in the thrall of the story of this star-crossed life of a tiny genius who produced some of the most powerful and romantic pop music of all time, yet who was cripppled by insecurities, haunted by demons, and may yet be proved to have committed the ultimate crime.

'Tearing Down the Wall of Sound' by Mick Brown