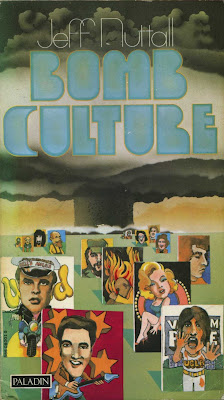 (Left): The excellent cover for the 1970 Paladin edition (UK) of 'Bomb Culture', credited to 'Head Office'. Any clues as to who they were ?

The most well-known of Jeff Nuttall's works (and with good reason), 'Bomb Culture' is a fascinating and vivid insight into
the mindset and mores of the alternative/underground scenes of the 50s and 60s told by a man who was in the thicket of it. But it is much more than that.

Here is the back cover pull quote from Peter Fryer, writing in New Society: 'Fragments of autobiography? Anarchist manifesto? Slice of contemporary cultural history? Manual for young guerillas in the generation war? The Underground's epitaph by one who was in at its birth? Jeff Nuttall's book is all these and more...his book is a letter from a man who deaperately wants to share his terrible healing vision in the hope that we may profitably pool our madness and our sanities. He is a man I should like as a friend.'

Even more interesting is this extract from Dennis Potter's review in The Times: 'BOMB CULTURE is an abcess that lances itself. An extreme book, unreasonable but not irrational. Abrasive, contemoptuous, attitudinising, ignorant and yet brilliant...a book which you must read, as soon as possible.'

Here is a short but key extract from the book that goes to the heart of the book's theme:

‘What way we made in 1945 and in the following years depended largely on our age, for right at that point, at the point of the dropping of the bombs on and , the generations became divided in a very crucial way.

‘The people who had passed puberty at the time of the bomb found that they were incapable of conceiving of life without a future. Their patterns of habit had formed, the steady job, the pension, the mortgage, the insurance policy, personal savings, support and respect for the protection of the law, all the paraphernalia of constructive, secure family life. They had learned their game and it was the only game they knew. To acknowledge the truth of their predicament would be to abandon the whole pattern of their lives. They would therefore have to pretend, much as they had pretended about ecstasy not being there, and they proceeded to pretend as cheerfully as ever. In any case, to look the danger in the eye might wreck the chances of that ultimate total security their deepest selves had contrived, death by H-bomb.

‘The people who had not yet reached puberty at the time of the bomb were incapable of conceiving of life with a future. They might not have had any direct preoccupation with the bomb. This depended largely on their sophistication. But they never knew a sense of future.

‘The hipster was there. Charlie Parker's records began to be distributed. The hipster became increasingly present in popular music and young people moved in his direction. They pretended too, but they did not enter the pretence at all cheerfully. In fact they entered the pretence reluctantly, in pain and confusion, in hostility which they increasingly showed. Dad was a liar. He lied about the war and he lied about sex. He lied about the bomb and he lied about the future. He lived his life on an elaborate system of pretence that had been going on for hun­dreds of years. The so-called 'generation gap' started then and has been increasing ever since.’