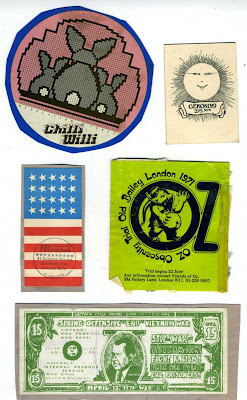 Some of the first fruits of the extensive
archaeological dig into the HQ INFO archive,
currently undergoing an extensive cataloguing operation
From Top Left:

1. Band sticker for Chilli Willi and The Red Hot Pepper's
first album - 'Kings of the Robot Rhythm' -
released on Revelation Records in 1972.

3. Business card for Joint Enterprises, who sold
smoking paraphernalia of all kinds and imported
very cool US skins from the States

4. Sticker produced as part of the protest
movement connected with the 1971 Oz Obscenity Trial
at the Old Bailey - the longest obscenity trial in British legal history.