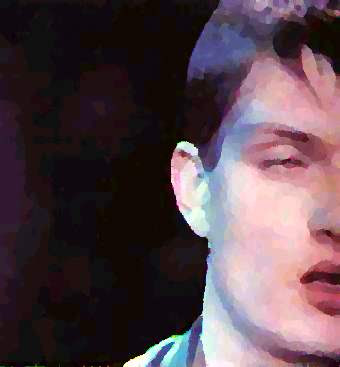 Last Friday night at the Duke of York's in Brighton - a night of torrential rain and strange encounters - The Generalist was fortunate enough to attend a special screening - as part of 's excellent Cinecity film festival - of 'Joy Division', a new documentary.

Due for release in the UK next March, 'Joy Division' is a remarkable portrait of the key band behind the explosive and remarkable Manchester scene that transformed a decaying industrial city into a world-renowned centre of new style and culture.

Shot and directed by Grant Gee and scripted and researched by Jon Savage, 'Joy Division' is a work of great beauty and artistry, a powerful and emotional experience that will leave no viewer untouched.

I have no doubt that it will come to be seen as the definitive telling of the story of one of the truly great bands of the 20th century and of the city from whose streets they emerged.

What this curiously unsettling film makes you feel is that you’re been given some very deep insights into something huge, important and glorious, a feeling enhanced by the eyewitness accounts of those who witnessed the birth of Joy Division. They describe the impact it had on them in almost spiritual terms, in a way strangely reminiscent of the accounts of the scientists who witnessed the early nuclear tests.

The surviving band members recount that the strange chemistry that ran between them was so strong that the music just flowed out easily and that it was only after the songs were written that it became difficult.

The figure and fate of Ian Curtis is central to the film’s power. We witness his transformation from mild-mannered married man to otherworldly shamanic priest, dogged by epilepsy, racked by emotional confusion. He commands our attention, even in his absence.

Joy Division’s music is not comfortable listening. It is mysterious and profound. Like Stravinsky’s The Rites of Spring, time has only deepened its force. It seems to be eternally contemporary but also eternally challenging and disturbing on levels that other music just cannot reach.

The film plunges into their strange world, into a story which we know has a dark ending, with great force and artistry. Its scrupulous, innovative and stylish collage of sound and vision always adds dramatic and powerful forward motion to the story. Everything fits so beautifully, seems so exactly right at every moment, that you are just carried along, as if by a deep ocean current, towards events that you suddenly realise you’re not entirely comfortable about.

Joy Division were young lads in the early 20s, lads who admit they never saw a tree until they were 12 and who rode pigs round the street for amusement, beer boys with no prospects and a lot of onboard anger. This fuelled their twice-weekly rehearsals - held in artic conditions inside wrecked warehouses – where they forged a sound of resistance powerful enough to challenge the prevailing atmosphere of the city, governed at the time by a near-fascist Bible-reading police chief, in a Britain ruled by the grim forces of Dame Thatcher and all her minions.

There is some very dark territory here but - in another curious paradox - the film is both inspiring and life-affirming. It awakens your senses and your intellect in equal measure. It is a window into a world in which magic can happen, a strange parallel universe where one small gang of street kids can create a music that now stands alongside the greatest of its time and beyond.