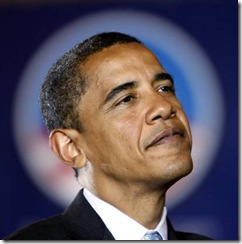 Near the end of his inaugural address, President Obama said the following:


'So let us mark this day with remembrance, of who we are and how far we have traveled. In the year of America's birth, in the coldest of months, a small band of patriots huddled by dying campfires on the shores of an icy river. The capital was abandoned. The enemy was advancing. The snow was stained with blood. At a moment when the outcome of our revolution was most in doubt, the father of our nation ordered these words be read to the people:


"Let it be told to the future world ... that in the depth of winter, when nothing but hope and virtue could survive ... that the city and the country, alarmed at one common danger, came forth to meet [it]."


These words were written by Tom Paine in the first of his series of pamphlets entitled 'The American Crisis', which George Washington did, in fact, have read to the troops in the most difficult days of the revolutionary struggle. 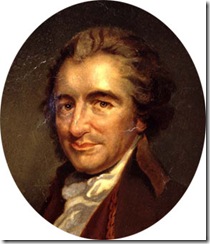 The quote in context reads:
“Quitting this class of men, I turn with the warm ardor of a friend to those who have nobly stood, and are yet determined to stand the matter out: I call not upon a few, but upon all: not on this state or that state, but on every state: up and help us; lay your shoulders to the wheel; better have too much force than too little, when so great an object is at stake. Let it be told to the future world, that in the depth of winter, when nothing but hope and virtue could survive, that the city and the country, alarmed at one common danger, came forth to meet and to repulse it. Say not that thousands are gone, turn out your tens of thousands; throw not the burden of the day upon Providence, but "show your faith by your works," that God may bless you. It matters not where you live, or what rank of life you hold, the evil or the blessing will reach you all. The far and the near, the home counties and the back, the rich and the poor, will suffer or rejoice alike. The heart that feels not now is dead; the blood of his children will curse his cowardice, who shrinks back at a time when a little might have saved the whole, and made them happy. I love the man that can smile in trouble, that can gather strength from distress, and grow brave by reflection. 'Tis the business of little minds to shrink; but he whose heart is firm, and whose conscience approves his conduct, will pursue his principles unto death. My own line of reasoning is to myself as straight and clear as a ray of light. Not all the treasures of the world, so far as I believe, could have induced me to support an offensive war, for I think it murder; but if a thief breaks into my house, burns and destroys my property, and kills or threatens to kill me, or those that are in it, and to "bind me in all cases whatsoever" to his absolute will, am I to suffer it? What signifies it to me, whether he who does it is a king or a common man; my countryman or not my countryman; whether it be done by an individual villain, or an army of them? If we reason to the root of things we shall find no difference; neither can any just cause be assigned why we should punish in the one case and pardon in the other. Let them call me rebel and welcome, I feel no concern from it; but I should suffer the misery of devils, were I to make a whore of my soul by swearing allegiance to one whose character is that of a sottish, stupid, stubborn, worthless, brutish man. I conceive likewise a horrid idea in receiving mercy from a being, who at the last day shall be shrieking to the rocks and mountains to cover him, and fleeing with terror from the orphan, the widow, and the slain of America.”
Thomas Paine (1737-1809) The American Crisis pamphlet I, 23 December 1776


This is not the first time that Obama has quoted Paine (if uncredited) According to 'The Nation': 'Obama quoted frequently from Paine and particularly from 'Common Sense', during his campaign for the Presidency.


The article continues: 'It was right that Obama turned to Paine. When the Pennsylvania Assembly considered the formal abolition of slavery in 1779, it was Paine who authored the preamble to the proposal.


Paine's fervent objections to slavery led to his exclusion from the inner circles of American power in the first years of the republic. He died a pauper. Only history restored the man--and his vision.


And on this day, this remarkable day, Thomas Paine is fully redeemed. Paine, to a greater extent than any of his peers, was the founder who imagined a truly United States that might offer a son of Africa and of America not merely citizenship but its presidency.'


'It was Paine, the most revolutionary of their number, who proved to be the wisest, and the best, of that band of patriots--for his time, and for this time....Today belongs to Barack Obama. But it also belongs to Thomas Paine. When our new president says that his election proves "the dream of our founders is alive in our time," it is Paine's dream of which he speaks. That dream may not be fully realized. But it is alive--more, indeed, today than at any time in the history of a land that might yet begin our world over again.'

"Blogging," Huffington wrote in the book's introduction, "has been the greatest breakthrough in popular journalism since Tom Paine." Paine's 1776 pamphlet "Common Sense" dramatically helped promote the cause of American independence.

'The most revolutionary minded of all America's founding fathers was Tom Paine, who articulated a flaming hope birthed in a vision of a new world and driven by the spirit of persistence to resist the British occupation. Tom Paine's self published forty page  pamphlet, "Common Sense" united and emboldened disparate and disconnected groups of settlers to become compatriots who rose up in rebellion and formed a nation where democracy thrives best on dissent grounded in common sense.'

- Eileen Fleming on Arabisto/News and Commentary on the Middle East

We could be rocking’n’rolling at Shakespeare’s Globe next year, to catchy songs with titles such as Rights of Man, Common Sense and The Age of Reason. The life of the 18th-century pamphleteer and revolutionary Thomas Paine might not seem obvious fodder for setting to music, but that’s what Trevor Griffiths, author of the screenplay for the Oscar-winning movie Reds and the play Comedians, is doing. Les Misérables tried something similar with moral philosophising — and, despite initially lousy reviews, has run and run.

“There will be about 20 songs in A New World,” Griffiths tells me. “But it’s a play with songs, not a musical.” The music will be by Stephen Warbeck, who did memorable scores for Shakespeare in Love and ITV’s Prime Suspect.

Griffiths has been trying to get a dramatised version of Paine’s life off the ground for more than 20 years, initially as a film, directed by Richard Attenborough. The director, however, has struggled to raise the money. Now Griffiths may have hit the jackpot not just at the Globe, but with HBO: the American giant wants its own film, with Tim Robbins directing and starring.