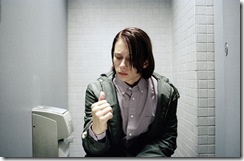 This post is about the shock & surprise of seeing one of my book's on-screen, full frontal, in the US  indie feature 'Thumbsucker'  directed by Mike Mills  and adapted from the Walter Kirn novel of the same name. I knew it was in there because I'd been tipped off by ace reporter Nicki Macadam but even so it was a shock to see it.  The scene comes early in the film. The girl that the boy Justin Cobb  fancies sits down at the library table opposite him and says: !Have you read that book'. Full-screen shot of 'The Greenpeace Story.' It's a bizarre kind of product placement, that's for sure. 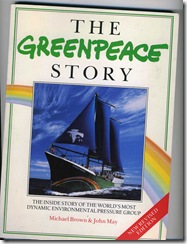 I enjoyed the movie much more than I expected. It seemed to have a genuine feel to it, thanks to the fine central performance by Lou Pucci. Its a delicate subject.

Wikipedia entry on the movie.