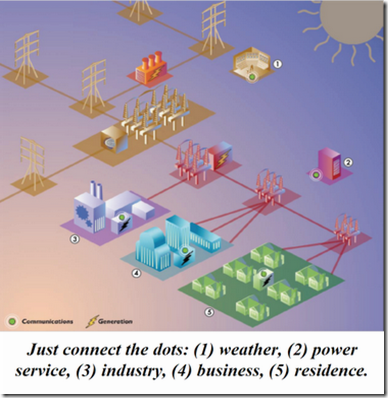 The Problem: The US electricity transmission and distribution system – or ‘grid’ — is in critical need of an upgrade. It is old, balkanized and too limited in its reach. The current grid is a series of independently operating regional grids – it can’t meet the needs of a nation whose economy would benefit substantially from the system optimization that comes with national interconnection. Its limitations and vulnerability to failure are also reported to cost the nation $80 billion to $188 billion per year in losses due to grid-related power outages and power quality issues. And most critical to clean energy development, areas rich in renewable resources like solar, wind and geothermal are currently not well-served and thus have no ‘highway’ available to move power outputs to the markets where that power is needed.

The Solution: Modernize and expand the infrastructure for moving electricity from where it is generated to where it is needed through a unified national smart grid. Make that grid ‘smart’ so that it can monitor and balance the load, accommodate distributed energy from local areas and, in the near future, capitalize on a massive national fleet of clean plug-in cars. This new grid encompasses both the long-distance, high-voltage transmission lines and the lower voltage distribution systems that connect the power to customers.

The Benefits: Updating our grid with advanced transmission will save money, increase reliability and protect consumers from outages, and make possible a clean electricity system. It will move renewable power from where it is generated to wherever it’s needed, whenever it’s needed. Just like the interstate highway system and railroads before it, investing in modernization of the grid will create thousands of jobs for American workers.

For 2009, It's All About Smart Grid and Storage

'With ethanol and fuel investing having exploded in 2007 and solar shining brightest in 2008, IBM has two words for you in 2009: Smart Grid.

Smart grid is attractive on a number of levels. For one thing, a substantial amount of the power in the U.S. is wasted. UC Berkeley's Arun Manjumar recently said that the U.S. consumes 100 quads (or 100 quadrillion BTUs) of energy a year and 50 to 60 quads get lost as waste heat or by other means before it can be used. Smart grid technologies that can help shuttle around power loads over a network conceivably could put a dent in that.

Second, the technology better fits into the VC mold for building companies. Unlike solar or biofuel companies, most smart grid outfits don't need to build huge factories. They develop software or networking devices for controlling various aspects of power transmission or consumption.

Cameron: we will build £1bn 'smart grid' to green Britain

David Cameron will set out his vision today for a low carbon Britain built around a £1bn investment in a hi-tech National Grid that would include putting "smart meters" in every home in the UK. The network would allow energy companies to tell people when it's cheapest to use electricity, cutting bills and making the system more efficient.

"A global energy network makes enormous sense if we are to meet global energy needs with a minimal impact on the world's environment. Such advances (in long distance transmission) may even make possible the visionary suggestion ... that the Eastern and Western hemispheres be linked by underwater cable to assist each other in managing peak energy demand, since the high daytime use in one hemisphere occurs at precisely the low night time consumption by the other."