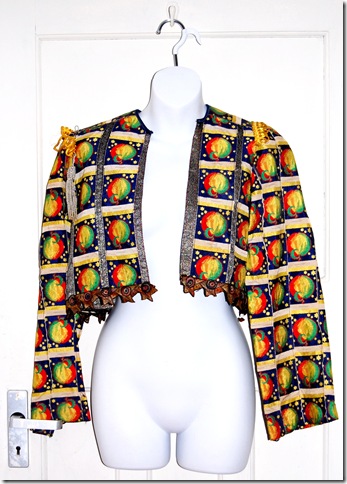 This is the strange and wonderful story of my bolero jacket - which connects the Beatles' Apple Boutique with Hawkwind.

I have journalist Paul Gorman and his wife Caz to thank in the first instance. As well as writing about Barney Bubbles [see previous post] and BB's connection with Hawkwind - who Paul had first seen and loved at an impressionable age - he has also produced another great book:

'The Look: Adventures in Rock & Pop

Fashion' (2006), which has developed its own blog at http://rockpopfashion.com/blog/

When I told him I had a special jacket which had been made for me when I was a dancer on the 1972 Hawkwind 'Space Ritual' tour he asked to see it. It is now enshrined on The Look blog in a picture story under the title: The Bolero Connection

It begins: 'THE LOOK brings you images of an extraordinary one-off jacket just loaded down with historic rock & roll fashion connections.' 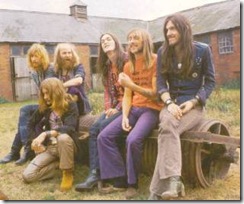 How I came to be a dancer with Hawkwind is a long story. The band always assembled at the Frendz office in Portobello Road where I worked, before heading off for a gig, usually also going for a meal at the Mountain Grill, the local greasy spoon which kept us all alive at that time. Mike Moorcock lived round the corner and we were all pretty good mates. As I recall, at some Grove party I asked Nik if I could get involved in someway withe their upcoming tour and I think he suggested I could be a dancer. Who knows for sure. What I do remember is going for a rehearsal in Brixton and just leaping about the stage in a mad fashion. Some of the band raised their eyebrows but no-one objected and I was suddenly on board for what was one of their greatest tours.

The fullest account of that Hawkwind tour I can find on the web is 'Lost In Space' by Mick Wall, published in Classic Rock in November 2000.

A brief outline of the story behind the tour:

'By 1972, the band were without doubt breaking into bigger times. Hawkwind's performance at the 'Greasy Truckers Party', held at the famous Chalk Farm Roundhouse in London was confirmation of this'

In June, 'United Artists' released the single 'Silver Machine', which rose to number 3 in the national charts despite limited radio airplay. The money gained from the sales of the single enabled the band to tour Britain with a truly mind–blowing show that became known as 'The Space Ritual'.

'The whole show had been in formation for well over a year and saw the creative talents of Barney Bubbles, Johnathan Smeeton (alias Liquid Len), Robert Calvert, Michael Moorcock and a host of others hit a peak and develop a pure multi–media background for the Hawkwind musicians, who by now were Dave Brock, Nik Turner, Dik Mik, Del Dettmar, Stacia, Lemmy, Bob Calvert and Simon King.

'In May 1973, UA released the double album 'Space Ritual 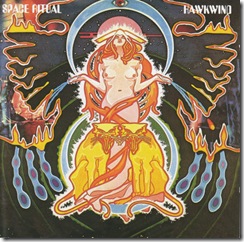 Alive', which came in a fabulous foldout sleeve designed by Barney Bubbles. The album contained almost 90 minutes of ultimate Hawkwind, heard as they should be – live. Acclaimed for being well ahead of their time, it was a slice of vinyl that combined rock music with theatre and to this day is still regarded as one of their most notable recordings.'

Few of the accounts of the tour note that there were two other dancers on-stage for at least some of the gigs - Renée La Ballistere and myself. According to an NME piece by Nick Kent, Ren