The other connection that my jacket has is with the 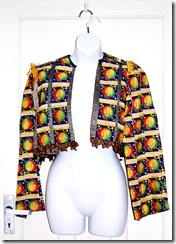 Beatle's Apple boutique as the jacket is made up of a large roll of labels, which were attached to each garment in the shop. My jacket consists of about 100 of these labels.

Since writing this original entry have had the pleasure of corresponding with Marijke Koger, who along with Simon Posthuma was the original founder of The Fool. She has corrected my original account and commented on the jacket: That's the most whimsical garment I have ever seen, wow.' 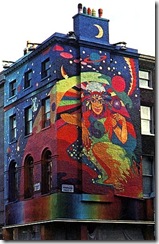 Because of the Beatles connection, there is a great interest in the history, the style and the clothes produced by The Fool, the quartet of designers from Amsterdam - as I have discovered. Here are some of the best sites.

Profile of the Apple Boutique on Strawberry Walrus 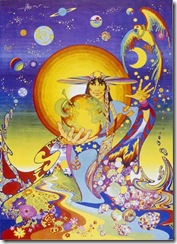 In the Life of...The Beatles

Two-part BBC video on the 40th Anniversary of the opening of the shop.

Site for Simon Posthuma, one of the four members of The Fool

Check also Wikipedia entries on The Fool and Apple Boutique