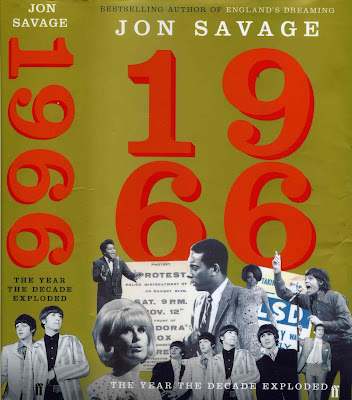 It would be fair to say I hold Jon Savage in high regard as do many other aficionados of music history, style and criticism. My June 2007 interview with Jon, which covers 'England's Dreaming', his seminal history of the punk movement, and his history of 'Teenage', can be listened to here: GENERALIST AUDIO. See also my excitable review of the Joy Division documentary, directed and shot by Grant Gee and written and researched by Jon. Brilliant.Also interviewed Jon about his research and script for the BBC Arena documentary on Brian Epstein. Here is a review of his latest book '1966: The Year The Decade Exploded' [Faber and Faber]


Jon Savage's new work, an elephantine (as in trumpeting) Everest (world's highest mountain) of a book could and should (on evidence from intro and index) be read as a grand monument to the 45rpm disc, the music it contained, and the effect that had on the youth and the culture.

'1966 was the last year,' writes JS, 'when the 45 was the principal pop music form, before the full advent of the album as a creative and a commercial force...'

'I was attracted to 1966 because of the music and what I hear in it: ambition, acceleration and compression. So much is packed into the 45s from this period: ideas, attitudes, lyrics and musical experimentation...Condensed within the two- to three-minute format, the possibilities of 1966 are expressed with extraordinary electricity and intensity. They still sound explosive today, fifty years later.'

JS turned 13 in late summer that year: 'The 45s that I heard went very deep and, in many ways, that mixture of mainstream pop, hard mod pop, West Coast, soul and Motown has stayed with me as an ideal...it is to their resounding and unquenchable spirit of freedom that this book is dedicated.'

The 100pp reference section at the back of the book contains 90 pages of Sources and Index and a 10-page month-by-month discography of  single releases, which, Jon  suggests, the reader considers as a 'playlist that simulates the mix of music I heard on Radio Caroline South during 1966 and extends it with the intervening fifty years of knowledge.' Ace Records are putting out a double CD set of 50 of these tracks.

The book has 12 monthly chapters, the first eight of which pirouette around one single and one theme. The final four are more fragmented, reflecting, JS believes, 'the fragmentation of modernist time and the breakdown in the unitary pop narrative that occurred at that point in the year with the disappearance of The Beatles.'

Chapter 7 stands for others in its modus operandi. It's a hot July and Wilson Pickett has a new record out: 'Land of 1000 Dances', recorded that Spring at Rick Hall's Fame Studios at Muscle Shoals.

This single was 'faster than any other dance tune of the time' notes JS and was 'one of those records that, through its very force, pulled the culture along with it, ratcheting up the intensity, matching and pushing the changing rhythms of the dances.'

The chapter takes us through the dance crazes, Chubby Checker, the arrival of the discotheque, the inside story of Tamla Motown, run like car factory where Berry Gordy once worked, the emergence of Stax and soul: 'Black American music was replacing the British invasion as the pop style to watch.'

But the towering figure was James Brown who stood up and made the link between the music and what, during that heatwave July, had become an explosive racial situation. The March Against Fear, riots, full-scale violence are documented here in detail. Civil rights was leading to the emergence of black power and its coded soundtrack. 'Dancin' In The Street' had many meanings.

JS records that, at one point in the March, Brown stepped up in front of a 10,000 strong crowd and 'wheedled, shouted, moaned, screamed his way through several tunes... and left the stage and the audience as dripping wet with perspiration and exhaustion as he was.'' This was his first public affiliation to the movement and 'the first time that a star of his magnitude had put himself on the line in this way.'

'1966' is built on testaments of the time, woven into a tumultuous tapestry. JS succeeds in inspiring us to re-investigate the music itself and effectively sets it within its social and cultural landscape, providing fresh insights. This valuable history is a narrative that refuses to fall into dumb cliche. It should inspire and encourage musicians, poets and activists alike. Will the music of our time find a way of addressing the mood and magnitude of our changing, turbulent world? 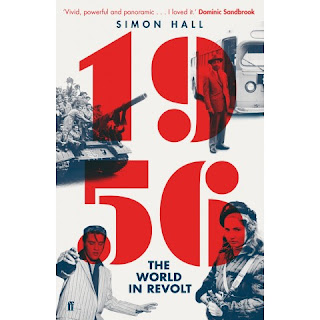 Coincidentally, Faber and Faber are also publishing '1956: The World In Revolt' by Simon Hall.

Geoff Jacobson in the Financial Times  review of this book concludes : 'Hall succeeds admirably in presenting 1956 as a year that belongs in the same revolutionary tradition as 1848 and 1968.'

The review starts with Antonio Gramsci's criticism of the way in which certain historical dates prevail over others in the collective imagination. Some years had formed, he writes, 'like mountains that humanity vaulted over, suddenly finding itself in a new world, coming into a new life.'

Simon Hall notes that historians have ignored Gramsci's views. Either Hall or Jacobson have put together this following list:

'The past decade has witnessed a fashion for histories that zero in on single years as turning points: 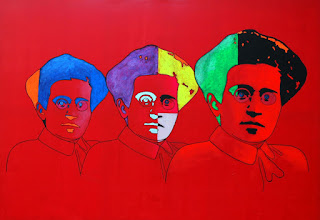 Out of curiosity, I tracked down Gramsci's essay on the Jacobin website:

Every morning, when I wake again under the pall of the sky, I feel that for me it is New Year’s Day.

That’s why I hate these New Year’s that fall like fixed maturities, which turn life and human spirit into a commercial concern....They make us lose the continuity of life and spirit. You end up seriously thinking that between one year and the next there is a break, that a new history is beginning; you make resolutions, and you regret your irresolution, and so on, and so forth. This is generally what’s wrong with dates.

They say that chronology is the backbone of history. Fine. But we also need to accept that there are four or five fundamental dates that every good person keeps lodged in their brain...And they have become so invasive and fossilizing that.... 1490 or 1492 are like mountains that humanity vaulted over, suddenly finding itself in a new world, coming into a new life.

So the date becomes an obstacle, a parapet that stops us from seeing that history continues to unfold along the same fundamental unchanging line, without abrupt stops, like when at the cinema the film rips and there is an interval of dazzling light.

That’s why I hate New Year’s. I want every morning to be a new year’s for me. Every day I want to reckon with myself, and every day I want to renew myself. No day set aside for rest. I choose my pauses myself, when I feel drunk with the intensity of life and I want to plunge into animality to draw from it new vigor.

No spiritual time-serving. I would like every hour of my life to be new, though connected to the ones that have passed.