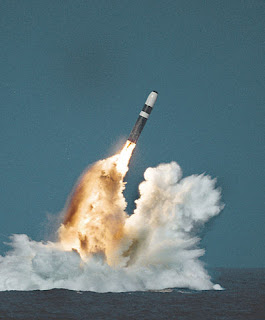 In Britain, one of the big debates of the moment is whether we renew Trident. Labour leader Jeremy Corbyn has announced that if he was Prime Minister he would not use nuclear weapons.

He first proposed that the Trident system should be scrapped completely but now he is suggesting we maintain the Trident without the warheads - an idea similar to the Japanese. Corbyn is at odds with his own Shadow Cabinet on the issue. However his views are receiving support from unlikely quarters.

Simon Jenkins is a Guardian columnist and BBC broadcaster. He was formerly editor of The Times and the London Standard and also  head of the National Trust. In his 15th Oct column last year, he applauded Corbyn's views on Trident.

Jenkins sat on a lay committee in 1977 during the Blair government's defence review; members were told to "think the unthinkable" about everything except Trident and new aircraft carriers. Jenkins writes:


'It was clear that Tony Blair and his team had been lobbied, not by the defence chiefs, but by the procurement industry.'

Labour's traditional anti-nuclear stance was abandoned in order to present New Labour as being patriotic and in favour of defense and mega-projects. He says that for decades Labour has 'not had the courage to confront the industry lobby behind Trident. Gordon Brown openly backed Trident simply as job-creation for Scotland.'


' I can recall no head of the army and no serious academic strategist with any time for the Trident missile. It was a great hunk of useless weaponry. It was merely a token of support for an American nuclear response, though one that made Britain vulnerable to a nuclear exchange. No modern danger, such as from terrorism, is deterred by Trident (any more than Galtieri had been in the Falklands or Saddam in Iraq). But the money was spent and the rest of the defence budget had to suffer constant cuts – and soldiers left ill-equipped – to pay for it.

He returned to the subject this month in a piece entitled: 'Renew Trident? It'd make more sense to put Dad's Army on the case'.


When the late defence chief Michael Carver famously asked of Trident, “What the bloody hell is it for?”, an informed guess was that roughly half his senior colleagues agreed, including most army generals. Former defence secretaries Des Browne (Labour) and Michael Portillo (Conservative) have come out against Trident. So have military experts from Hugh Beach to Patrick Cordingley. So has the formerly pro-nuclear defence pundit Michael Howard.  Trident’s defenders have been largely confined to naval and defence industry lobbyists and a few Conservative MPs

Since the coalition government came to power in 2010, immunity to reason has been obligatory among Trident apologists. Rumour had it that Cameron, possibly on Trident and certainly on aircraft carriers, was a sceptic. That was before the lobbies got to him. The cost of the programme soared from £20bn in 2004 to somewhere north of £100bn today and fails to stop...The new Astute class submarines, replacing Vanguard, have been cursed by cost and technical problems.

All declared threats to Britain tend to come either from powers with no conceivable designs on conquering Britain or from forces immune to deterrence. Nor has anyone explained why, if Trident is so vital to Britain’s safety, that is not true for the 25 non-nuclear Nato states, not to mention almost all other countries in the world.

Today Trident’s chief enemy is neither Corbyn nor the Treasury. It is technology. Renewal is besieged by questions about cyber security... It now appears that submarines will be vulnerable to squadrons of underwater drones, armed and able to read their every move. A seaborne missile may be as obsolete as a medieval warhorse in the age of the rifle.

This final coup de grace argument was amplified in The Guardian's weekend magazine in 'Of Mice and Men: Inside the new Cyber Wars' by  Julian Borger, the paper's Diplomatic Editor. This excellent if chilling piece examines, in part, the development of underwater drones. The piece concludes:


The renewed Trident deterrent is not due to be in service until the early 2030s. By then, the oceans are almost certain to be swarming with anti-submarine drones from many rival powers, with far higher capabilities than the ones being trialled at La Spezia [NATO's centre for Maritime Research and Experimentation]

“Trident is old technology,” says Paul Ingram, executive director of the British American Security Information Council, based in London and Washington DC. “The submarines are big, they’re expensive, with very long lead times. The technology chasing them will be will be 30 or 40 generations on by the time they hit the water.”

He believes the uncertainties about Trident are just one part of a much bigger revolution, in which behemoths such as missile submarines and aircraft carriers are being outpaced. In this new world, technology is largely developed in the civilian sector, where the pace of innovation is fast and could be available to small nations as well as terrorist groups. In other words, history could be on the side of the swarm. 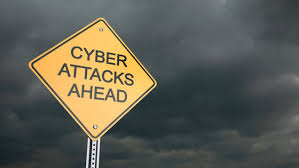 Cyber Wars connects us with another story entitled 'Nuclear Sites in 20 nations seen open to cyberattack.' by David E. Sanger in the New York Times.

It centres on a study made by the Nuclear Threat Initiative (NTI), a leading nuclear non-proliferation watchdog, into concerns over the likely threat of a cyber attack to disable a nuclear power plant or to overcome the defences protecting nuclear material from theft.

A nation- by-nation study, that included Argentine, China, Egypt, Israel, Mexico and North Korea,  examined many aspects of cyber security such as  whether cyber attacks are acknowledged as a a threat, whether cyberprotection is mandated by law at such facilities, and whether there are regular simulated drills and tests.

Twenty countries failed all the indicators, according to Page Stoutland, one of the authors of the study.Sanger reports: 'Because of the secrecy surrounding military nuclear facilities, it was impossible to determine the levels of cyberprotection used to protect nuclear weapons in the nine countries known to possess them'

Sam Nunn, a former US senator, led the initiative to dismantle nuclear weaponry in the former Soviet republics after the Wall came down, and was the co- founder of NTI with Ted Turner.  Now 77, he has worked hard to reduce the amount of nuclear material in the world. In the last years that NTI has been issuing reports and holding annual summits, significant progress has been made. A dozen countries have eliminated all weapons-usable nuclear materials and many others have improved security measures. However progress is slowing, says Nunn. "When things are strained between the two big nuclear powers, which have 90 per cent of the weapons and materials, it makes it harder" for other nations to reduce their stockpiles.

NTI's latest report found that 24 nations still have more than 2.2 pounds of nuclear material, "much of it still too vulnerable to theft".

Sanger concludes with a brief account of the most famous cyberattack on a nuclear facility to date when the US and Israel combined forces to attempt to destroy or disable the Natanz nuclear enrichment plant in Iran. The program, codenamed Olympic Games, used a 'worm' later named Stuxnet, to successfully disable centrifuges in the plant, even though Natanz was isolated from the Internet.

'The lesson of Stuxnet', says Sanger, 'has apparently been lost on many nations that have yet to develop requirements that nuclear facilities have cyberprotection in place before they can operate.'


The Greatest Terrorist Threat: How to stop nuclear material from falling into the wrong hands

Thanks to work that began in the early 1990s and has intensified through biennial Nuclear Security Summits since 2010, we’ve reduced the number of countries possessing nuclear materials from 52 in 1992 to 24 today. Yet as leaders prepare for the Nuclear Security Summit in Washington, D.C., in March 2016, there is still ample cause for concern. Today, more than 1,800 metric tons of weapons-usable materials remain stored in countries around the world, some of it still too poorly secured and vulnerable to theft. A recent report on a sting in southeast Europe exposed another chilling reality: a black market in nuclear materials. Compounding the threat is the fact that it doesn’t take much material to build a bomb and the technical know-how needed to do it is more accessible than ever. 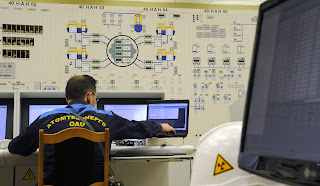 One US cybersecurity expert is arguing that world nations should jointly pledge they will spare civil nuclear facilities from computer attacks for humanitarian reasons. Bruce McConnell co-authored a 2014 report for the EastWest Institute that describes nuclear information security as a "signature security issue of the information age", decrying that the topic has received too little attention.