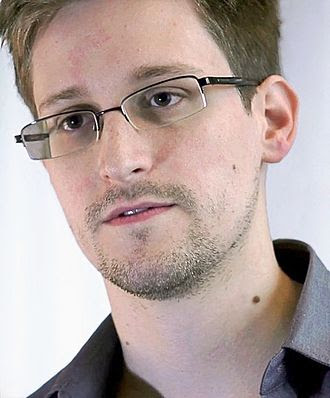 “I don't want to live in a world where everything I say, everything I do, everyone I talk to, every expression of creativity and love or friendship is recorded.”


Its taken me two years to catch up with the Edward Snowden documentary 'Citizenfour', directed by Laura Poitras and have just discovered that Oliver Stone's movie 'Snowden' goes on general release in May this year. 'Citizen Four' is gripping, scary, thought-provoking. I now know I am a citizen in a country which has the highest level of personal surveillance of any country in the world (Snowden reveals).

Here is the main website where you can donate to Snowden's legal costs and find out a helluva lot about who he is, where he's coming from and his motivation:  https://www.edwardsnowden.com/

The Intercept is an online publication launched in February 2014 by First Look Media, the news organization created and funded by eBay founder Pierre Omidyar. Glenn Greenwald, Laura Poitras, and Jeremy Scahill are the editors. The magazine serves as a platform to report on the documents released by Edward Snowden in the short term, and to "produce fearless, adversarial journalism across a wide range of issues" in the long term. [Source/Wikipedia]

In partnership with The Intercept, artist Trevor Paglen offers a glimpse of America’s vast surveillance infrastructure, photographing three of the United States’ most powerful intelligence agencies—including the NSA—and placing the images in the public domain.


'The photographs below.... show three of the largest agencies in the U.S. intelligence community. The scale of their operations were hidden from the public until August 2013, when their classified budget requests were revealed in documents provided by Snowden.

Three months later, I rented a helicopter and shot nighttime images of the NSA’s headquarters. 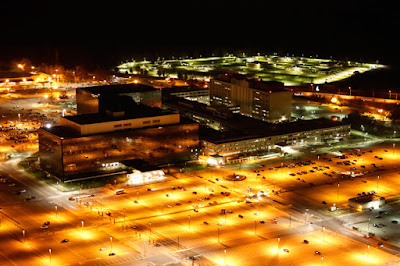 NATIONAL SECURITY AGENCY (NSA)
With a 2013 budget request of approximately $10.8 billion, the NSA is the second-largest agency in the U.S. intelligence community. It is headquartered in Fort Meade, Maryland.

I did the same with the NRO, which designs, builds and operates America’s spy
satellites 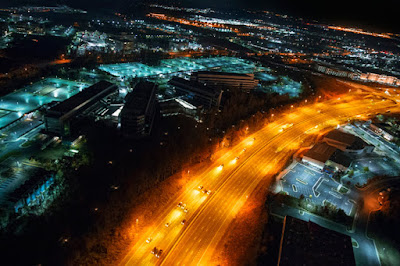 NATIONAL RECONNAISSANCE OFFICE (NRO)The NRO is in charge of developing, deploying and operating reconnaissance satellites. With a budget allocation of $10.3 billion, it is the third-largest U.S. intelligence agency. Its headquarters are in Chantilly, Virginia.


and with the National Geospatial-Intelligence Agency (NGA), which maps and analyzes imagery, connecting geographic information to other surveillance data. 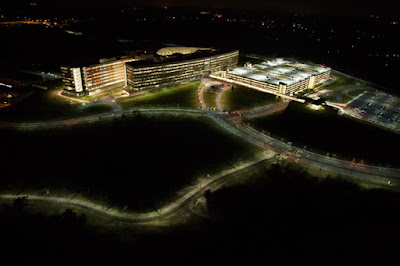 NATIONAL GEOSPATIAL-INTELLIGENCE AGENCY (NGA)
The NGA is responsible for collecting, analyzing and distributing intelligence derived from imagery. According to documents provided by Edward Snowden, the NGA’s latest budget request was $4.9 billion—more than double its funding a decade ago. It is headquartered in Springfield, Virginia.


The Central Intelligence Agency—the largest member of the intelligence community—denied repeated requests for permission to take aerial photos of its headquarters in Langley, Virginia.

'My intention is to expand the visual vocabulary we use to “see” the U.S. intelligence community.
Although the organizing logic of our nation’s surveillance apparatus is invisibility and secrecy, its operations occupy the physical world.

If we look in the right places at the right times, we can begin to glimpse America’s vast intelligence infrastructure.

These new images of the NSA, NRO and NGA are being placed in the public domain without restriction, to be used by anyone for any purpose whatsoever, with or without attribution' 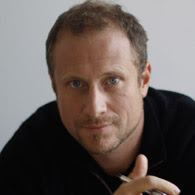 Trevor Paglen's work deliberately blurs lines between science, contemporary art, journalism and other disciplines to construct unfamiliar, yet meticulously researched ways to see and interpret the world around us.

He is the author of five books and numerous articles on subjects including experimental geography, state secrecy, military symbology, photography and visuality. His most recent book, The Last Pictures, is a meditation on the intersections of deep time, politics and art.