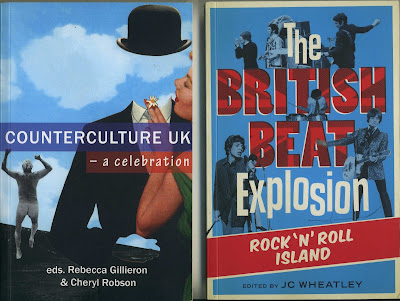 London-based independent publishing company Aurora Metro  and its associated imprint Supernova Books are driven by the accomplished Australian-born producer/
writer/director Cheryl Robson - a true creative entrepeneur. After cutting her teeth at the Beeb, she taught filmmaking at the Uni of Westminster, then created a theatre company, producing and developing women's plays, together with this publishing enterprise. Their catalogue showcases  world fiction, young adult fiction, non-fiction culture and plays. These two titles caught The Generalist's eyes:

Within these broad labels, the essayists choose their own personal take, most but not all
following chronological paths. In Film, f'or instance, Ellen Cheshire charts the progression of events in counterculture cinema whilst K. Charlie Oughton goes for 'Subversive Cinema: Cult Film and the Rise of Film Fan Communities.'  Susan Murray's 'The Changing Landscape of Comedy' is dedicated to the late Rik Mayall and is a great read from a chirpy and chippy practitioner. Being of a certain generation, much of the early history I knew but it now seems to have acquired a new context. After all, what do we mean by 'counterculture' in our new stress strewn, paranoid, 24/7, fractured, screen obsessed, austerity ridden, surveillance saturated England/Britain (whatever). The books intro by Cheryl R and Rebecca Gillieron begins thus:

'What exactly is counterculture?  The term suggests resistance to the norm and has come to encompass everything from alternative lifestyles to large movements advocating social change. Today, in advanced Western democracies, where mass protest seems to have little impact on government policy, the value of group resistance needs to be re-examined. Simultaneously, the ways in which individuals can have a voice and influence society have mushroomed as a result of the digital age.'

'The value of this book lies in its overview of the many strands of counterculture which have developed to express creativity, resistance and revolt. Britain's countercultures weave a densely interconnected fabric and share a long and continuous history. The 1960s was definitely a high point for new ideas, innovation and technology, as well as being a time when young people had access to free university education for the first time and were testing boundaries and exercising new freedoms. And the will to disrupt and change society still lives on in the younger generations, as evidenced by punk and he Occupy movement, Individuals continually create new subcultures, challenge the mainstream in new ways and new places, and they will keep doing so as they try to translate their desire to create a better world into action.'

The essay concludes: 'As we transition to a new age in which work becomes more collaborative, information is shared globally and capitalist market forces no longer hold sway, new countercultures will appear, grow, fade and disappear to help us come together and find our way.' 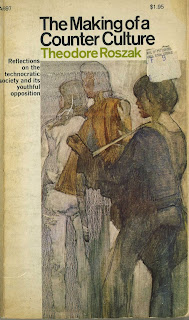 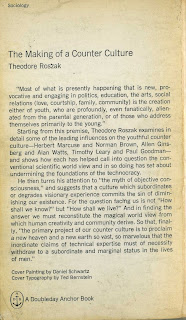 As the book rightly points out, the term 'counterculture' was originally used by Theodore Roszak in 'The Making of a CounterCulture' [Published in 1969 by the University of California Press].

This is an original copy of the paperback edition, published simultaneously by Anchor Books the same year. I bought it in a
second-hand bookshop  in Lewes. It's still got a torn sticker on the front from the University of Pittsburgh Book Store.

The book opens with two quotes:

Art Degraded, Imagination Denied:
War Governed the Nations
* * * *
Rouse up, O Young Men of the New Age! set your foreheads against the ignorant Hirelings! For we have Hirelings in the Camp, the Court & the University, who would, if they could, for ever depress Mental and prolong Corporeal War
- William Blake

'At this point, the counter culture I speak of embraces only a strict minority of the young and a handful of their adult mentors....

....the counter cultural young are significant enough both in numbers and in critical force to merit independent attention. But from my own point of view, the counter culture, far more than merely "meriting" attention, desperately requires it, since I am at a loss to know where, besides among these dissenting young people and their heirs of the next few generations, the radical discontent and innovation can be found that might transform this disoriented civilisation of ours into something a human being can identify as home. They are the matrix in which an alternative, but still excessively fragile future is taking shape...

...all we have to hold against the final consolidation of a technocratic totalitarianism in which we shall find ourselves ingeniously adapted to an existence wholly estranged from everything that has ever made the life of man an interesting adventure.

If the resistance of the counter culture fails, I think there will be nothing in store for us but what anti-utopians like Huxley and Orwell have forecast - though I have no doubt that these dismal despotisms will be far more stable and effective than their prophets have foreseen. For they will be equipped with techniques of inner-manipulation as unobtrusively fine as gossamer. 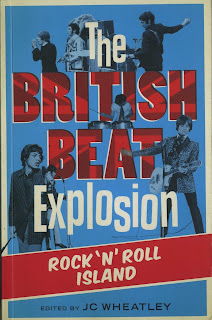 If Soho was the junction box of British music in the late 50s/early 60s and beyond, with its seedy network of pubs and clubs, the other London hotspot was down the river to the West where jazz, blues and later rock and R&B thrived in various venues including the legendary Eel Pie Island Hotel.
This genteel 19th century building hosted ballroom dancing during the 1920s and 1930s. When it reopened in 1956, trumpeter Brian Rutland and his Grove Jazz Band, started sessions there.

That was the beginning of the Eel Pie Jazz Club, later taken over by Arthur Chisnall, under whose stewardship it became a legendary venue. Jazz greats who appeared there regularly included Acker Bilk, Chris Barber, Ken Colyer, and George Melly. Up until 1957 when a bridge was built, all the equipment and musicians had to be ferried over by boat.

By 1967 the venue's bohemian reputation and ramshackle nature attracted bikers and squatters and the attention of the police and fire brigade and the hotel was forced to close. The club reopened briefly in 1969 under the title 'Colonel Barefoot's Rock Garden' featuring psychedelia and heavy rock from the likes of Black Sabbath, The Edgar Broughton Band, and Hawkwind. My only visit to the place was in that period, when I deejayed for what I think was some kind of benefit gig, shortly after the release of the first Led Zeppelin album which I played that night.

Like the previously reviewed book on David Bowie and the Beckenham Arts Lab, this is another valuable street level oral history full of reminiscences from musicians and punters alike. Its full of great black and white pics that capture the atmosphere of those days.

This book was part of a larger project held during the summer and autumn of 2013 organised by Aurora Metro Arts and Media, in association with Arts Richmond and the Eel Pie Club, which included talks, exhibitions and a documentary.
Full details here: http://eelpieislandmusic.com/