FREAK HISTORIES: A HERO FOR HIGH TIMES / TALES FROM THE EMBASSY / GOODBYE TO LONDON

Three freak histories have coincided at THE GENERALIST HQ. All are valuable additions to the library and come highly recommended. 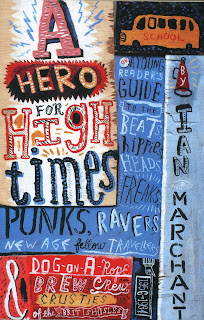 'A Hero For High Times' by Ian Marchant [Jonathan Cape] is the most recently published of the three Its full and grand subtitle outlines its mission: 'A Younger Reader's Guide to the Beats, Hippies, Freaks, Punks, Ravers, New Age Travellers And Dog-On-A-Rope Brew Crew Crusties Of The British Isles 1956-1994'.

Ian tells the history through the story of the life of his friend Bob Rowberry who he's known for some 30 years. Now 75, Bob has lived through all these times and trends and has a grand fund of anecdotes about his life on the road, on the streets of Soho, his journeys to Afghanistan. He was present at many of the major festivals and defining events and was an enthusiastic consumer of the best drugs of the time. Living life on the edge, he still resides in an old school bus in a wood in Wales where, throughout the book, he and Ian sit drinking mugs of coffee, smoking spliff and recording Bob's chatter. Amongst Bob's claims to fame are that Procol Harum was named after his cat, that he gave R.D. Laing his first acid trip and that he was the first to import Afghan coats to Britain.

The book is named after a famous Russian novel by Mikhail Lermontov 'A Hero of our Time' and the quote Ian draws from it underpins his view of Bob: 'You know, there really exist certain people to whom it is assigned, at their birth, to have all sorts of extraordinary things happen to them'.

Ian came on the scene during punk, was in a band, had a hectic and creative life of his own as a performer, writer and now historian.As he explains it, the impetus for the book came from when he was lecturing at Birmingham University and noticed not only that there was little or no political activity, unlike when he was at Uni, but also that the students knew nothing about what he calls Freak culture.

Ian suggests that all the different forms and tribes of dissenters can be united under a united freak banner. It's clear that there was a connection, a wave of protest, that spread throughout the time period the book embraces - from 1956 when Ian highlights the Suez Canal crisis, the Soviet invasion of Hungary and the release of Elvis Presley's 'Hearthbreak Hotel' as starting points to the Convoy and road protests of the 90s.

In the book, Ian intersperses essays of various lengths which - for the Younger Readers - explains the background to the events and people that Bob is referring to. The 480 pages include a good index, bibliographies, discographies and lists of relevant films. The main text is also peppered with references to other key works.

When Bob mentions a person or a topic, like his meeting Ronan O'Rahilly the founder of Radio Caroline, Ian halts his reminiscences and writes a good background brief on the era of Pirate Radio and Ronan's personal story - a lot of which I didn't know, although I did meet him on several occasions. There's an important section for instance on the fact that, up until the 60s, homosexuality was illegal which may shock many of his Younger Readers. There is nothing patronising in his tone. He writes clearly and openly about the sexism of the 'underground', pointing out also that many of the important battles for freedom were fought in the '70s and beyond.

Ian tries to avoid the ground already covered at length by Barry Miles in his numerous titles that document both the Beat and the 60's cultural revolution, such as the underground press and the major metropolitan events that Miles played a role in. [See Previous Posts: Barry Miles: Boswell of the Underground and The British Underground Press of the Sixties.

This is refreshing, although one aspect of the  underground press that would bring added value to his history would be the remarkable spread of regional and local underground press from that period. When I was at Frendz magazine - a national underground newspaper that is still under the radar [The Generalist holds the nearest thing to its official archive] - I compiled a list and a map of more than 100 mags and papers in existence at that time (1971/72), a mixture of litho-printed papers and fanzine-types, produced on a Gestetner and stapled. This kind of duplicating machine, now superseded by the photocopier, known generically as a mimeograph, produced copies from a stencil.

Ian is very good on all the free festivals,  the commune movement [500 in the UK in 1985], the early green movements, the travellers and the Tipi Valley scene in Wales [Ian was born and lived in Newhaven, a few scant miles from where these words are being written, and moved Welshwards in mid-life ].

Hw writes that the American-based Whole Earth catalogue was a big influence on these movements and here am happy to correct one small matter: 'There was a short-lived British version, called the 'Index of Possibilities.'  In fact what happened was Colin Moorcraft began a 'Whole Earth Catalogue British Edition' supplement in Friends magazine, Much later, in 1972, in what became Frendz, myself and colleagues produced a couple of 4pp supplements entitled 'The Great British Catalogue'. We then got a book deal with Wildwood House to produce a book of the same name. In fact this morphed into a different style of book: 'An Index of Possibilities: Energy and Power' - a strange kind of alternative encyclopedia. Two other volumes were commissioned but never completed. See Previous Index post.

'A Hero For High Times' touched me deeply and we [who call ourselves freaks] owe Ian Marchant and his open heart profound thanks for a grand work well done, His infectious enthusiasm and unpretentious style flows like a river. He tempers Bob's outrageous acts and statements with experiences and opinions of his own and they form a yin and yang partnership [Theory and Practice] producing a story-telling style that will appeal to his Younger Readers as he styles them. The book is dedicated to his real or future granddaughters. This could be 'The Outsider' for our time. I'm sure Colin Wilson would have approved of what is a genuine attempt to reach out, energise and inspire, the next wave of freaks by puttting them in touch with their own history.

Marchant writes: 'Freaks wanted everybody to look at everything in new ways.'  We still want that. This is a book that deserves your attention. 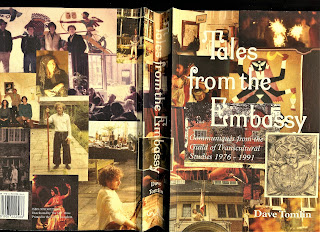 First published at the end of last year, 'Tales From The Embassy' [Strange Attractor Press] is a remarkable account by the main protagonist  Dave Tomlin of how he and an unusual floating tribe of others, successfully squatted and occupied the Cambodian Embassy in St John's Wood in London from 1976-1991.  During those years, the squatted Embassy also played host to numerous events and concerts featuring musicians from many parts of the world including the wonderful Musicians of Jojouka from Morocco, who so entranced Brian Jones and played in  Brion Gysin's restaurant and night club.
Dave was one of the founder members of the Third Ear Band who I saw many times at events and festivals and always thought were really cool. Dave reveals himself to have remarkable sang froid - grace under pressure. He is the one who gets into the place first, who sorts out electricity and water, organises a full-scale restoration of many of the interiors and deals with the police, council and many other authorities who take turns in trying to get them out. Dave invented the Guild of Transcultural Studies as a front for a radical experiment in living and thinking outside the box.

Dave Tomlin has a très élégant writing style and this 500pp book is an absolute delight because of that but also because the tales are told in short essays, "communiques" of varying lengths, each one a vignette of an eccentric and wonderful world. The cast of characters in the book is lengthy; the main ones have pseudonyms but there is a list at the back with their real identities. Hoppy Hopkins and John Michell make short appearances. There are a host of memorable regular inhabitants, many of them with astonishing skills as artists or makers, musicians or cooks. The book also covers the Ladbroke Grove Free School and other initiatives in or around Portobello Road that also feature in Bob Rowberry's reminiscences. As ever with SAP books, great care has been taken with the edition - a fine cream paper and well-chosen type - which adds to the pleasure of these magical real-life tales. 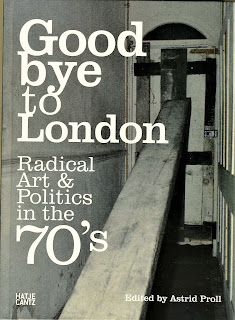 Finally, this is a great and wonderful find, which chimes in well with the previous title. 'Goodbye to London: Radical Art and Politics in the '70s' is a hardback catalogue published by Hatje Cantz in 2010 for an exhibition staged in Berlin by The New Society for Visual Arts (Neue Gesellschaft für Bildende Kunst or nGbK).

The book is edited by Astrid Proll who also writes the foreword. A member of the Baader Meinhof gang, in 1971, at the age of 26, she escaped to London after being arrested in Germany and charged with attempted murder. She married and was able to obtain new identity documents under a new name and to hold down a variety of jobs whilst living in squats.

In 1978 she was arrested by the Special Branch, fought her extradition but then, the following year, she voluntarily went back to Germany to fight her case. 'The attempted murder charge was dropped when it was gathered that the state had withheld information that could have cleared her but she was still sentenced to five and a half years imprisonment on account of bank robbery and falsifying documents; however, she had already spent at least two-thirds of that time in German and English prisons and therefore was released immediately.' [Source: Wikipedia]

The book is a fascinating collection of essays, photographs and artwork documenting a time when there were lots of derelict buildings and more than 30,000 people squatting in the capital. Amongst the contributors are a great essay and photographs by Jon Savage called London Subversive', artwork by radical photomontagist Peter Kennard and photos by Jo Spence. The book's four main sections concern squatters in Tolmers Square, the South London Gay Liberation front, the Grunwick strike and art of the seventies. 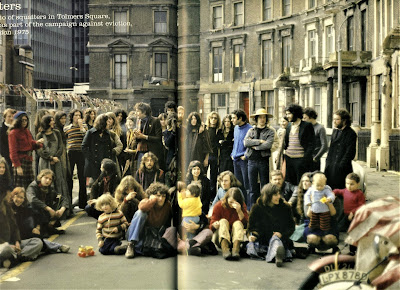 The back cover text reads: 'In a sense, the real sixties were the seventies. In the collective memory the counterculture of the seventies has taken a backseat between the revolt of 1968 and the appearance of Punk - unjustly, since the counterculture of the seventies in London was decisive in the liberalisation of British society, and the art of the time has influenced many following generations.The publication aims to demonstrate the potential that can arise from a crisis. It highlights the possibilities of radicalisation and will draw attention to a London that is still largely unknown.' 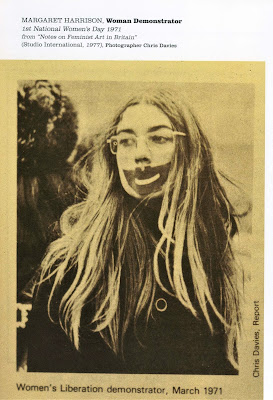